Every now and then something pretty special makes it to gaming that is able to share something real with the world. Song of the Deep is one of those games and if you'll stick with me I'll tell you a little about it and my experience playing. 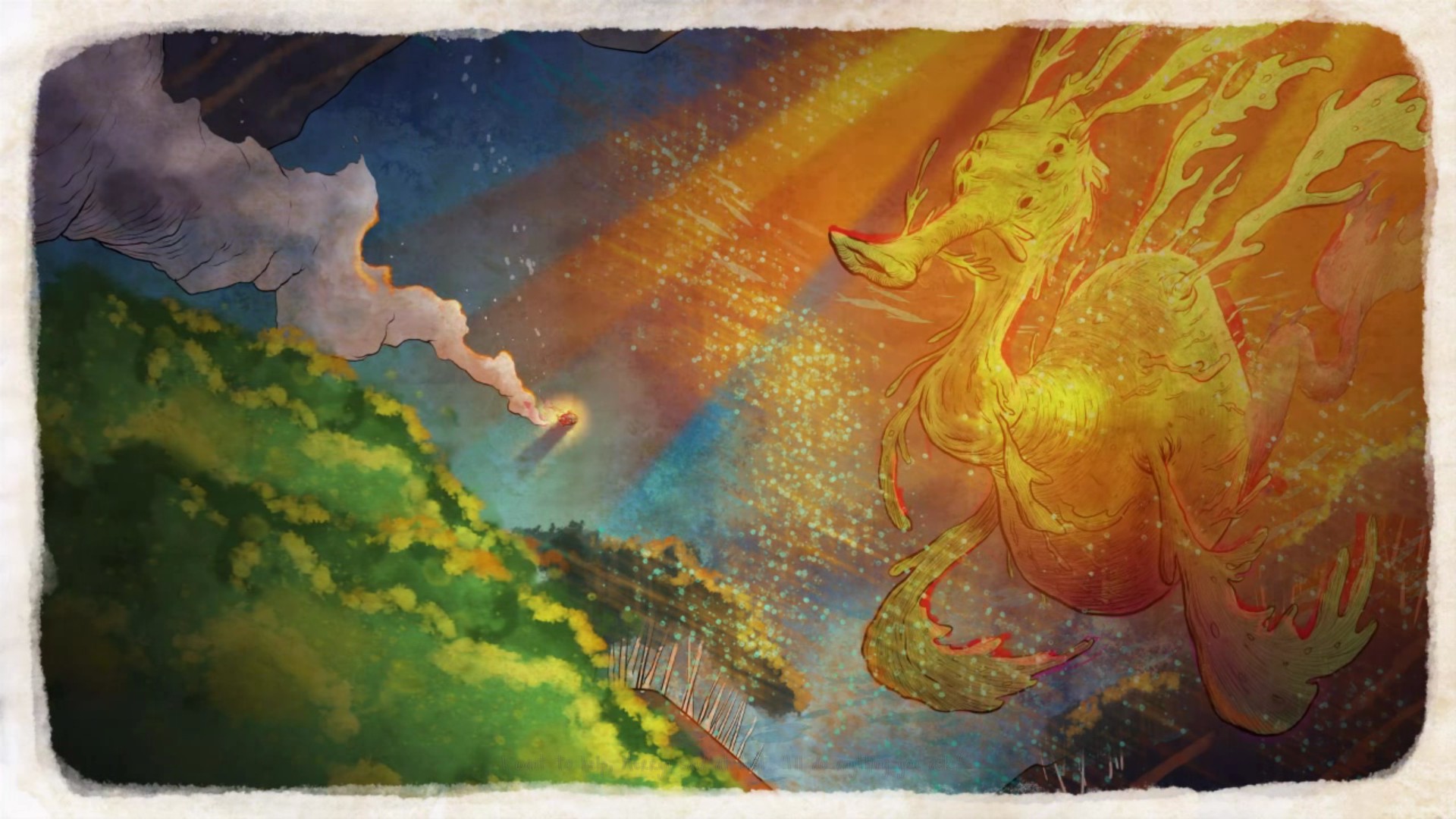 This is the story of a girl who day in and day out watches for her father's return after he's been fishing. During her young life she's listened to her dad's fantastical tales of the sea and has had simple and happy existence, but one day he doesn't come home. Thus is a hero born of our twelve year old protagonist, Merryn. Refusing to believe he's gone, she scrapes and scrounges and manages to build a submarine to search the waves and soon learns how true all those stories happened to be.

Song of the Deep is partly based in Irish folklore and wouldn't even have come to be without a very special relationship between a father and daughter in real life. I speak of Brian Hastings and his daughter, Fiona. Fiona happens to be very creative and through her young life has brought to fruition several tales and even put together some art to illustrate her works. Brian is the co-founder of Insomniac Games [Spyro the Dragon, Ratchet and Clank] and happened to pay a lot of attention to some of the stories Fiona had come up with. He then decided he would create the character, Merryn, based on Fiona's stories to give her someone to look up to. Someone who's not just the stereotype "sexy" or "badass" but someone who can use their intelligence and resilience to solve puzzles and overcome the challenges she faces. A small but dedicated team was built and we now have this beautifully crafted 2d side scroller to play and live out Fiona's [and her father's] ideas.

Song of the Deep is as briefly stated above, a beautifully rich environment. I love the art direction. This game uses a lot of color saturation to bring about certain moods in different areas. For instance, Glowkelp Forrest, wherein Merryn first starts her adventure is brightly lit with greens and blues and purples invoking a cheery environment in which to explore the ocean. In the background you'll notice a busy place with sea turtles moving about and crabs and schools of fish flashing in the sun's rays. 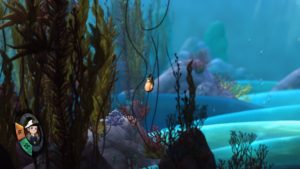 While lots of areas are well lit and happy, there are also those that are dark and forbidding. Caves contain a very different, almost claustrophobic feeling and dangers lurk in the shadows. The Maw, a place of dimly lit open water as far as can be seen with its large dark shapes looming in the distance actually gave me a sense of trepidation as I pushed Merryn to explore further. 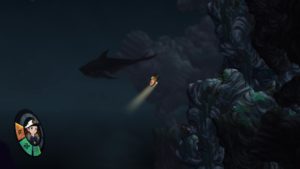 Environments range greatly from open water with its strong currents, to cramped dark caves, to sunken cities filled with maze like corridors and puzzles to solve along side the dangers of ancient, automated security trying to prevent Merryn from accomplishing her goals. It can all add up pretty quickly. So what happens when the challenge becomes too much and the sub is destroyed? There are checkpoints called "Tyne Wells" generously placed throughout each area and are visibly marked on the map. So if Merryn is defeated she'll just start from the last checkpoint reached. Most areas also have fast travel "warps" in them as well so if that last checkpoint was a ways off it's usually pretty easy to get back.

It's also worth pointing out that Song of the Deep uses the Unity Engine instead of Insomniac's own, Insomniac Engine. An interesting choice to say the least but I have to say it runs very well at a pretty consistent 200 plus frames per second on my machine [4 gz 8 core, 16 gigs ram, R9 390x]. The only complaint I have here is that it seems pretty CPU heavy and really drove up the temperatures. Even with the room in the low 70's Fahrenheit I was seeing the cpu guage at times rise above 60 degrees C. That made me play this game in relatively short stints but it's still perhaps the best use of Unity that I've personally seen.

The story of Song of the Deep flows fluidly and overall feels very good. However the characters themselves don't seem to have much development. Their arcs all peak very early on and from there no real change is evident.

Merryn goes from just a girl waiting for her dad to an innovative and determined benefactor before the game even starts and that's where she stays. That's not a bad thing really, she's a girl on a mission and intends to carry it out. But it would have been nice for her to have been presented with some choices to add intensity to the emotion that's being conveyed at certain times.

Merryn's father is talked about quite a bit during play and that kept him in my mind, but he doesn't play much of a role except as an end goal. He's a fisherman who clearly loves his daughter and went missing, that's about it.

Through progression you'll meet other characters that make recurring appearances and even feel some emotional bond with them, but for the most part they are what they are. One character, Swish, happened to be my favorite because he seems to have the most development of anyone. Overall the game gets the point across and I found myself caring about everyone in general, but I have to say that I feel Song of the Deep falls a bit short here. It doesn't hurt the game play and the story is still a joy to go through, however I would like to have seen a little more depth where it mattered.

Exploration of the varied environments and combat will yield resources that add up and allow for the purchase of upgrades for the submarine. One of the first things you'll find, and perhaps the most important is The Magnetic Hook. With this Merryn can grapple various items in the environment and throw them, she can use it as an anchor during strong surges in current and she can thrust it at enemies for use as a weapon. Various upgrades for the Magnetic Hook, and virtually everything else, are available from friendly crustaceans who serve as shopkeepers. As more and more upgrades are found you'll notice there are more and more environmental interactions available. Make mental notes and be sure to backtrack occasionally because you'll find access to places that were impossible to reach before.

Merryn and the sub fly through the water with grace and ease thanks to the exceptional polish put on the controls. I used an Xbox One controller and I'd recommend you do the same, but the keyboard and mouse controls are also very functional. Menus are easy to navigate and both the map and upgrade menus will pause game play. 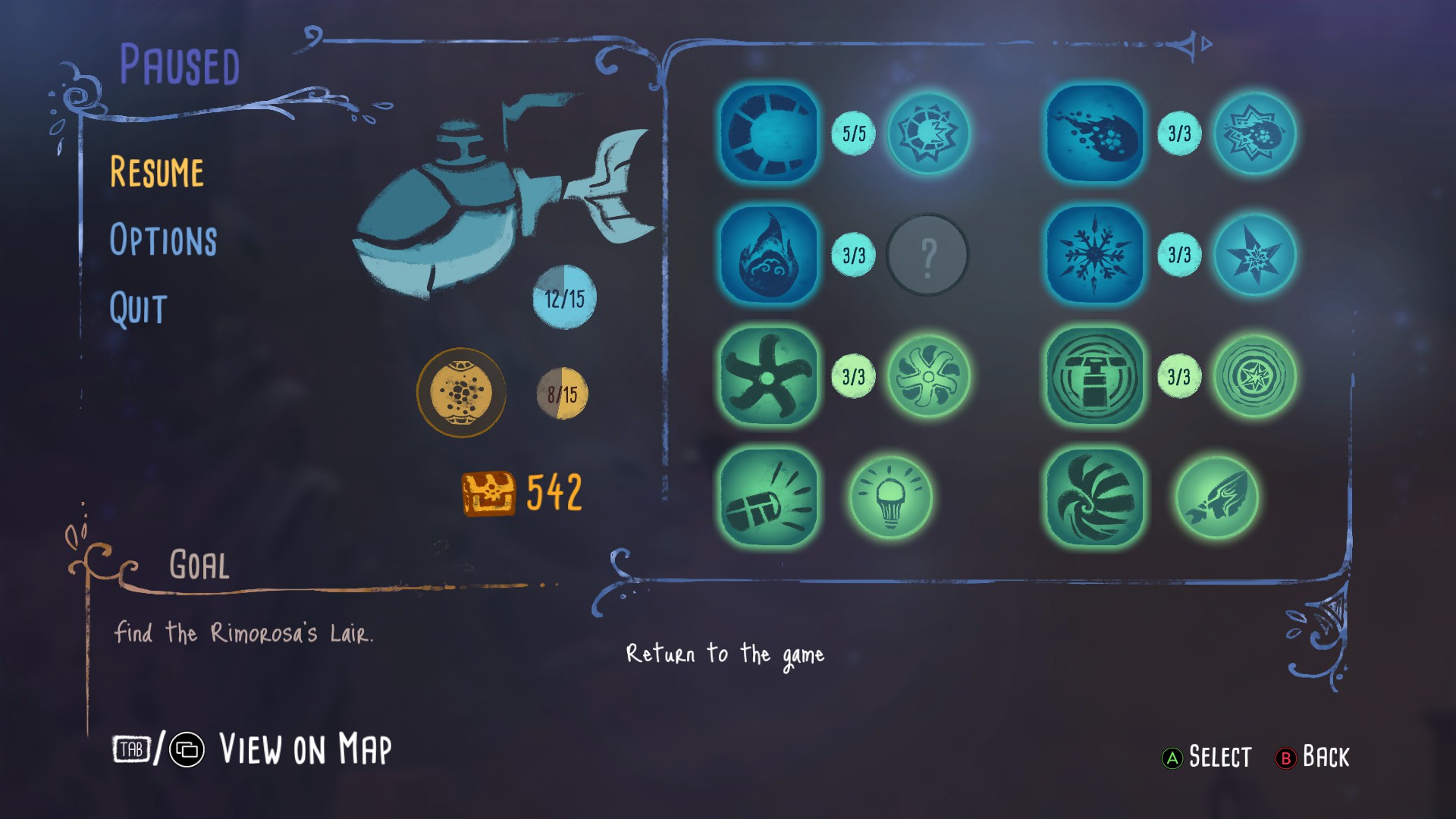 Underwater environments are simply incomplete without proper sounds to convey that feeling. Song of the Deep has no shortage of dull thuds and whooshes as Merryn and her sub bounce off objects and currents rush through narrow passages in the rocks. The sub itself makes a very satisfying, bubbly noise as its propeller churns through the sea.

Virtually everything has its own unique intonation without ever sounding muddled or overly busy. Projectiles slice through the water, electricity buzzes and zaps, stones grind and explosions boom in their own muffled way.

Music also fits the under sea environment exceedingly well while remaining completely original and not at all cliche. Never did I get the feeling of being on a pirate ship, or tropical isle.

Of course a story steeped in Irish folklore wouldn't be complete without a great narrator telling the tale from Merryn's point of view. Siobhan Hewlett does a wonderful job at providing that voice for us all to enjoy.

Song of the Deep is at first a bit more about exploration and some minor puzzle solving that it is about defense and aggression. Soon enough however Merryn will find herself assailed more and more often by the various denizens of the deep. Thankfully all those upgrades and treasures have allowed you as the player to make things easier for Merryn as this happens.

Torpedos come in three types: electric, magma and ice and can be switched around on the fly with a simple radial menu. They can all be upgraded to perform beyond their initial capabilities in some rather creative ways. The ice torpedo for example, can be upgraded for use as a mine field with the player holding the fire button to "charge" the weapon releasing several small, stationary ice mines that may freeze Merryn's attackers.

Likewise can the Magnetic Hook be upgraded; damage and range increases mostly but even it has a couple of bigger surprises later on.

During exploration Merryn will also find some basic upgrades for the sub's hull and energy levels allowing for greater damage absorption and more consecutive torpedo shots respectively. Those Tyne Wells I mentioned earlier that act as checkpoints will also repair any damage and restore the sub's Tyne (that's the energy level) as Merryn crosses their warm glow. 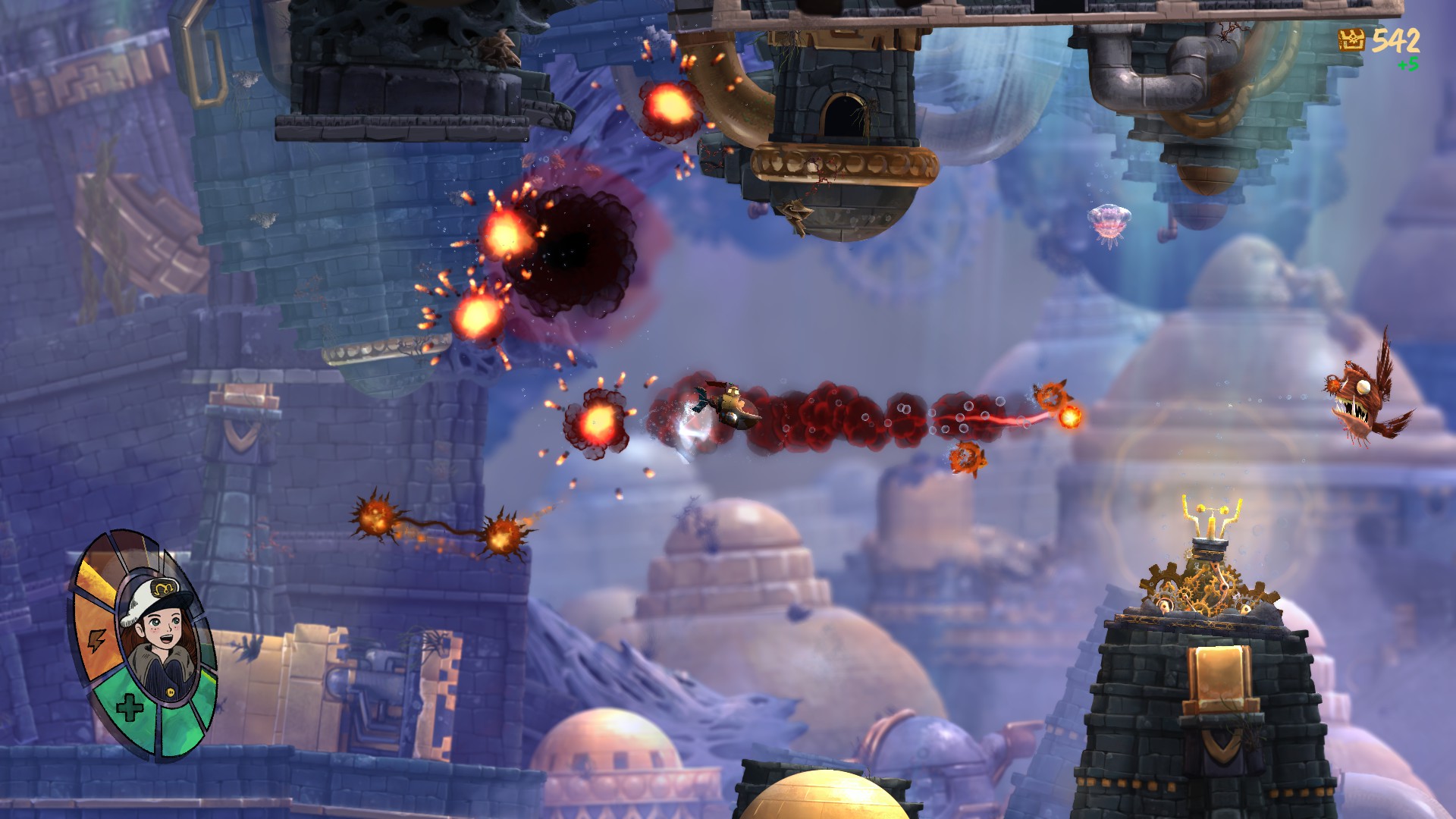 Boss battles are put together very well requiring the player to learn strategies and patterns and are in my opinion the most fun had in combat. They can range from mini bosses like sentinels firing bombs that Merryn must catch and throw back while dealing with environmental and other outside forces, to major bosses requiring deliberate movement and action for survival.

Song of the Deep is a beautifully made Metroidvania style side scroller game that ultimately happened to come about thanks to the relationship between a father and daughter. Well that and of course the development team at Insomniac who had no small part in bringing this wonderful title to life.

Song of the Deep is $15.00 on Steam, you can also purchase the sound track separately for $9.99. There's even a real life hard cover novelization available along with a soon-to-come picture book. I know, pretty cool.

So the question of the hour: Would I recommend Song of the Deep? Yes I certainly would. This is a game that's been out for two months now. Real life and a long backlog were the causes of me taking so long to play it. My play through took about twelve hours in total, and that time felt just about perfect. There's little sense of urgency while playing as things only become hectic here and there throughout the game. This title provides a family friendly story to play through with a great narration set in a wonderfully rich environment. Play it with your kids or by yourself, check out the book and have fun. 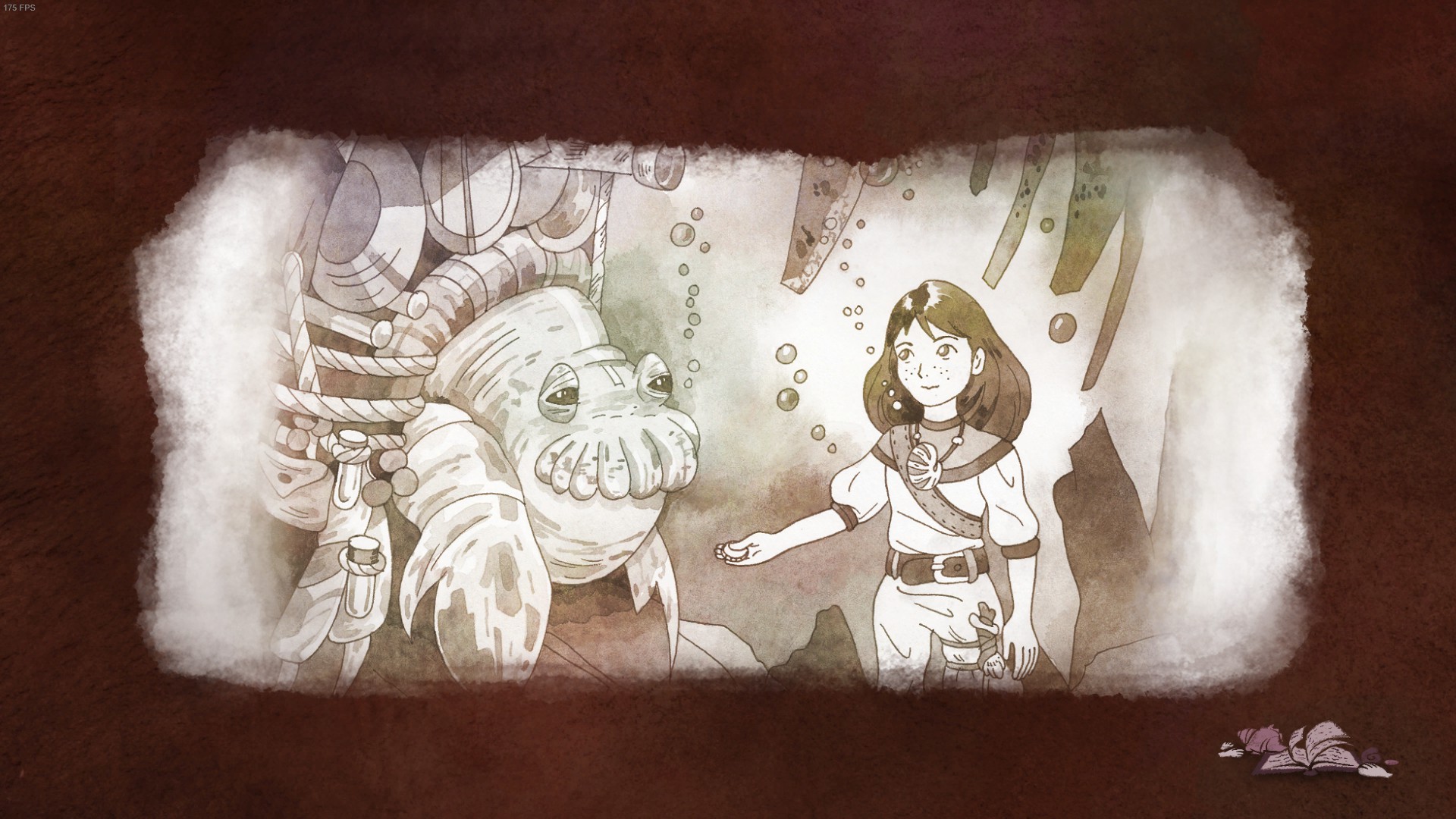 System Requirements for Song of the Deep are as follows