I spent a lot of good time playing Spitires: MudRunner and I regret nothing. It's slow pacing and punishing mud mechanics made it pretty enthralling to sit behind my XBONE controller and haul lumber in the Siberian wilderness. Not to mention that once that bit started feeling a little stale there was always map exploration and rock crawling to do with the many and varied vehicles. Modders have also added a ton of longevity to MudRunner by creating maps and vehicles galore. It's a good experience and I recommended it in my review here.

Saber has very recently added an inexpensive expansion that brings the challenge to the U.S. and I've been enjoying it a lot. Click that Read More button and I'll tell you how I'm getting east bound and down on PC.

American Wilds is supposed to be based on places like the Carolina back country. I can't say if this holds true from personal experience because I've never been to the Carolinas, but I can say that it does differ enough from the Russian wilderness to indeed feel like a new location. The changes are seemingly minor but the difference is noticeable.

Colors are less muted, road signs are distinctly American, buildings are very "small town America", then there're the trucks. Ford, Chevy and Freightliner have made their mark here. I'd like to see some Dodge representation, but that's just me I guess. Anyway- There are two new maps and nine new vehicles to choose from. The same progression system is in play and you'll have to complete the first region before being allowed to tackle the next. More advanced vehicles are locked behind points but it's worth the wait.

The addition of extra hurdles are also a thing here. Three of the new America rigs are absolutely not for off-roading and are marked with warnings saying so. Both new maps include lots of paved sections of road and that's where these new highway vehicles are useful. And they will be needed. Iron arch bridges span rivers too deep and swift to cross but are too low to drive the crane trucks under so you'll need to figure out ways to make load transfers and avoid the block posts that disallow vehicles carrying lumber to pass through. 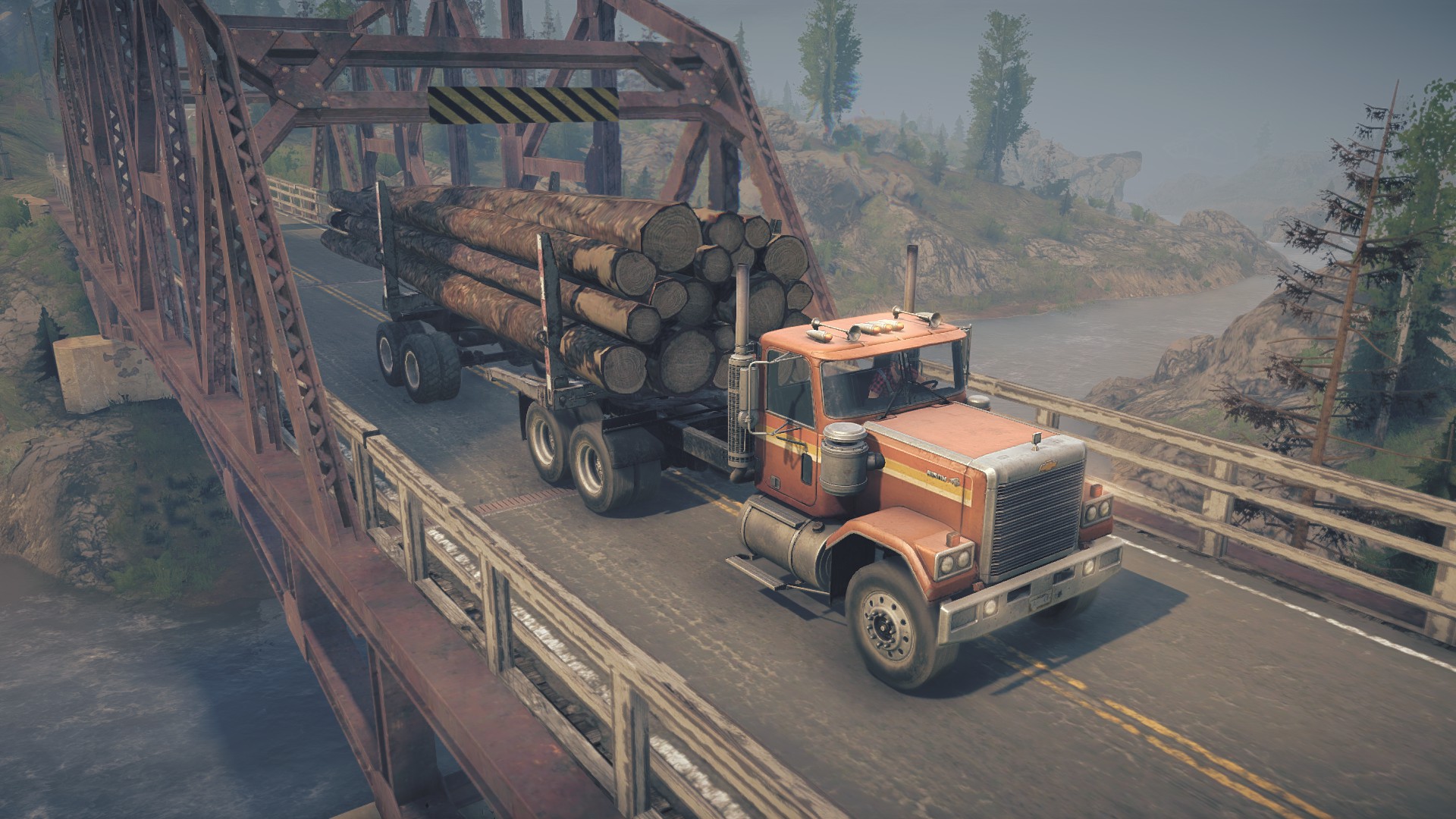 A minor detail that may not be so positive is that the new maps feel fairly linear when you first start. That is to say that there just aren't very many solutions until you unlock all the new trucks because the maps are built to use all the new trucks to their extent. Once you have every new vehicle unlocked you can take more risks and enjoy the new regions to their full potential. So while that may sound like a slight limitation it's not all bad. It just makes you think more tactically in order to explore and fill your quotas.

These new maps are also "scavenge" maps, meaning there are no logging stations to load from. Instead you'll have to trudge your way through the muck to find logs at various scavenging points and take appropriate action. It's nice to have that bit of change and extra challenge to keep it fresh. The only down side is that they spawn randomly at any scavenge location. So you may find yourself moving logs that you can't carry until you're able to spawn the ones you can.

Either way you look at it though, all the same hazards are there to contend with and the same great game play is at hand to enjoy. I've already managed to roll the Skidder off a ledge and then quickly capsized a Western Star fueler trying to winch it back upright. 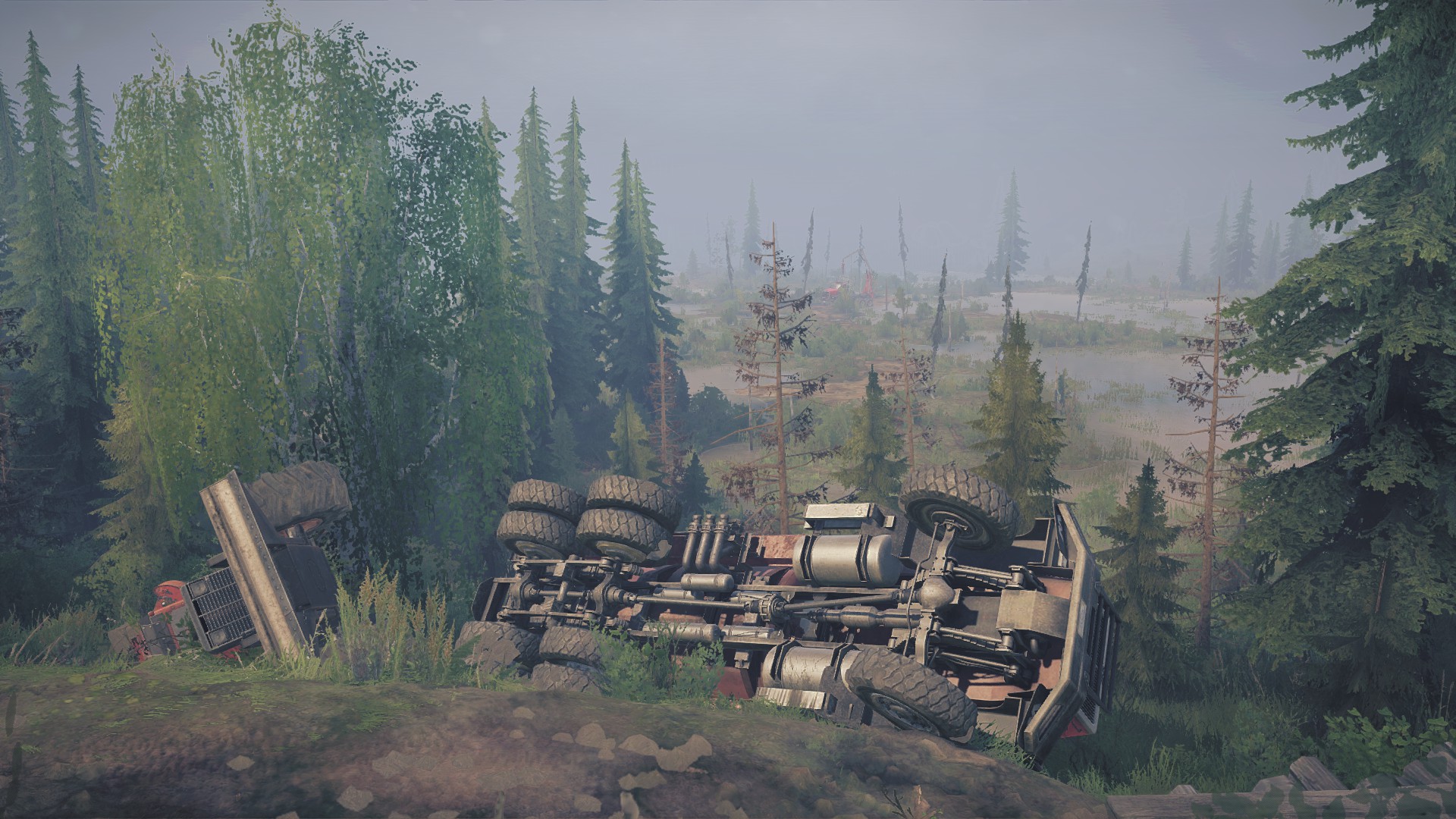 We Got us a Convoy

Playing around with the new vehicles and their add-ons has been a lot of fun. It's quite a challenge to get everything to gel together and work a rhythm into your game play. Once you figure it out, you'll find yourself bouncing between trucks to fuel other trucks and repair even others. It's particularly great to use the new type A vehicles for exploration. The Chevy Blazer and the Ford F150 are there, as well as an O.G. H1 Humvee to tool around and unlock watch points with. By comparison they're much more effective than the type A's in the base game and are therefore actually useful. The Blazer and the F150 do 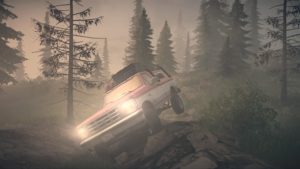 handle like a cow on roller skates at speed though so be careful of that.

The Skidder and the Western Star are the two vehicles that I've found most useful. They're extremely capable and decent on fuel, which is really important because 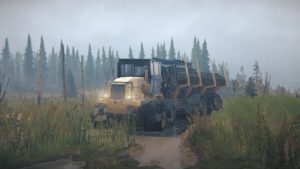 even the largest mover you can use, The K9000 Forwarder, only has 340 liters on board, and it can use something like 36 liters per minute. So you can only run full tilt for a short time before you're dead on the side of the road and needing a fueler for rescue. By comparison, the Skidder using two wheel drive, uses about 8 liters per minute and around 16 in all wheel. The Western Star is similar.

That's not to say that the highway trucks are useless at all. The Ford 9000 is quick, powerful, efficient and has lots of loadout 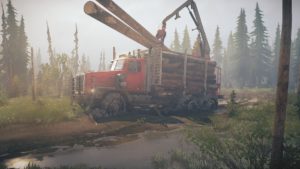 options. The Chevy Bison can't carry as many trailer types but can easily handle the heavy loads of the long logs. While the Freightliner is more powerful than both and 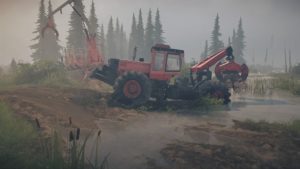 can even handle some short trips in the mud if you're careful. Though I wouldn't recommend taking any of them in the dirt if you can avoid it. Using everything in conjunction, the Skidder can bring lumber to the highway vehicles and the Western Star can crane the loads on board for them to make deliveries. Or you can try and take risks like river crossings to avoid all the switching. 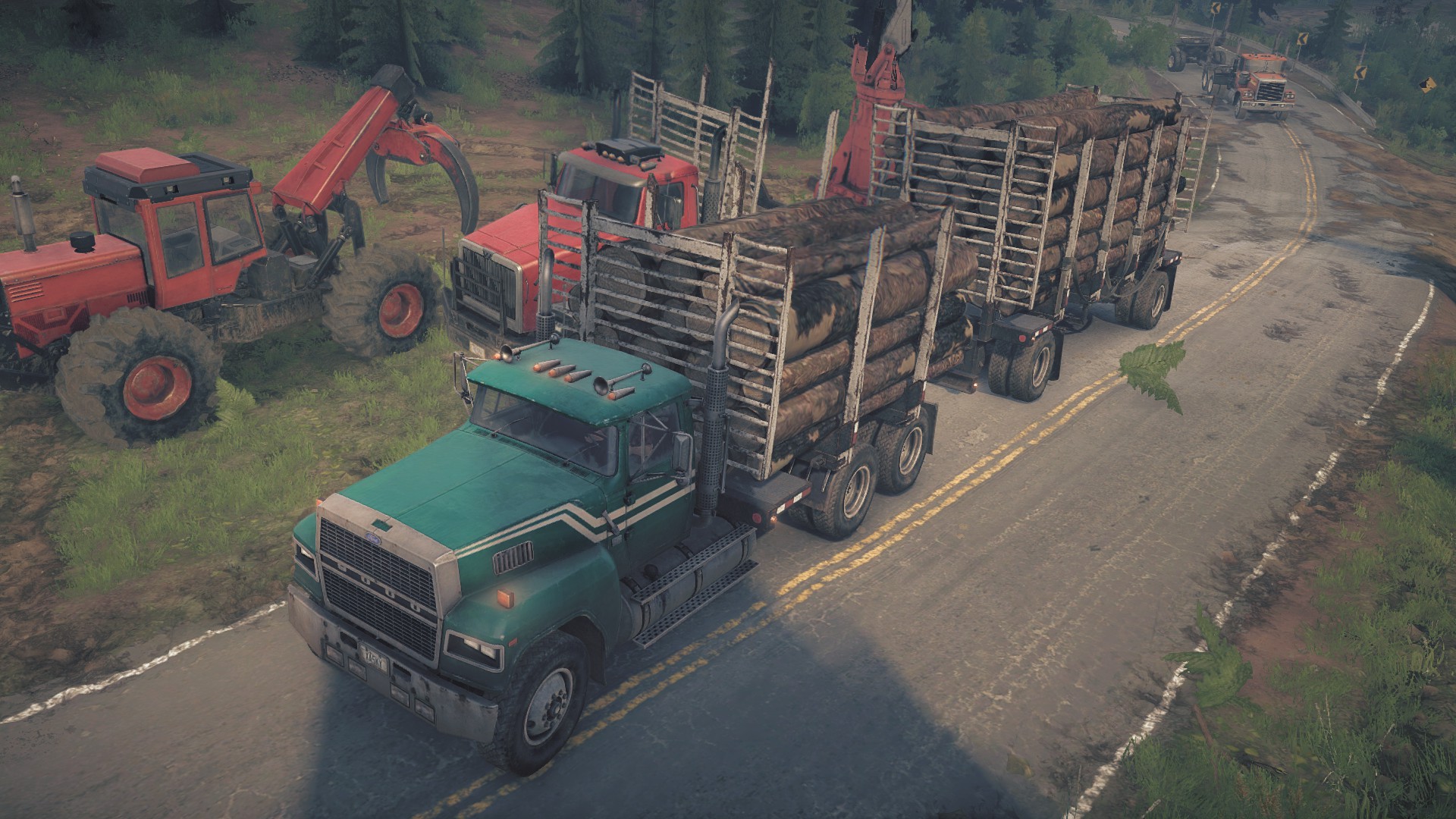 MudRunner is only getting better as it goes along. Two free DLC additions with vehicles have been introduced since initial release- and they're good. It doesn't feel like some cobbled together content to satisfy players.

Multiplayer is still a little janky, the net code isn't very good and there are some weird rules that take place when you partner with someone else. Not being able to use each other's vehicles or even see the one's you have parked, for instance. But now with console mods available the audience is even bigger.

I'd recommend checking out MudRunner in general because you'll get lots of content for a really reasonable price and it'll run great on anything even slightly modern. The American Wilds expansion just adds even more to what's become my favorite driving sim since Gran Tourismo 3 on PS2. 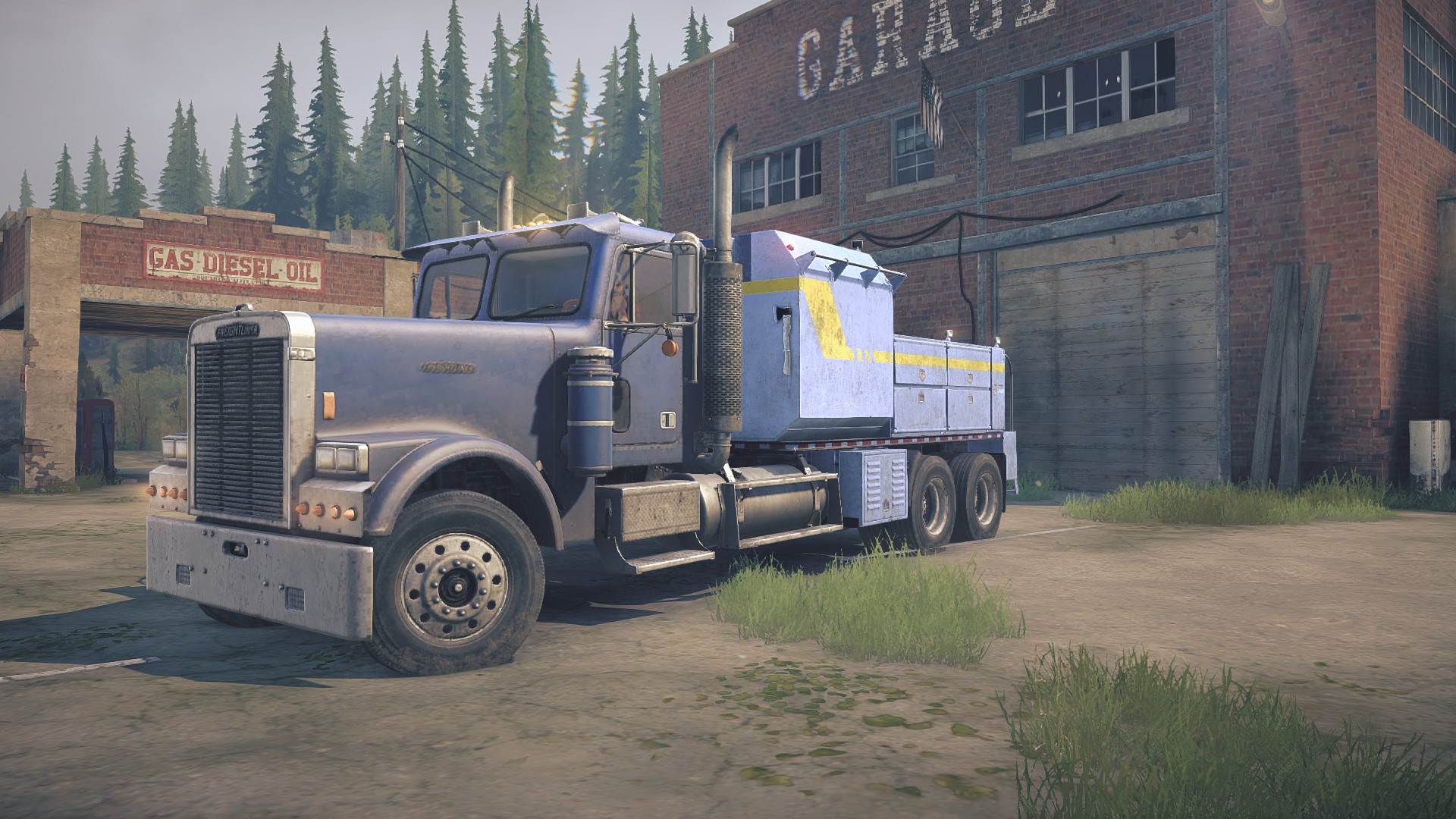 System Requirements for Spintires: MudRunner and the American Wilds expansion are as shown below