Fatshark has done it again. So well in fact that within the first two weeks of release, Vermintide 2 sold more than 500,000 copies and has brought in more revenue for the company than the first title did --ever! Stay with me and I'll tell you what I think so far.

Vermintide 2 has so far drawn me in pretty deeply. It's not quite as big in terms of maps as the original yet, but it makes significant improvements in game play and adds new enemy types, weapons, character classes, even boss mechanics. Some of which the original Vermintide experimented with in some it's later DLC.

I played nearly 400 solid hours of Vermintide and I never got bored with it. I loved hacking at endless hordes of Skaven in a group of chatty anti-heroes who were brought together via necessity and bonded through battle. When I started seeing information about a sequel I got all tingly and decided I needed more. Fatshark opened a beta sign up and I jumped into that with both feet. It took some time, but I finally got in and the game was solid even then. Now that Vermintide 2 is out and populated it's been receiving balance tweaks, stability updates and further optimisation to keep things running smoothly.

Let's start by saying the first Vermintide runs pretty poorly. It's always been playable and there are loads and loads of options to get things going how you want, but I never had a stable frame rate and that was just something I had to get used to. The sequel reaches us using the same game engine but it's much more highly optimised. Even in great masses of enemies I don't see huge frame drops very commonly. Plus the game looks better and seems to even have a higher poly count in lots of the models. It's not perfect for sure, but again, loads of options will help run things smoothly. From the standard video / audio options, down to even being able to choose how many cores you'd like your CPU to devote to playing. 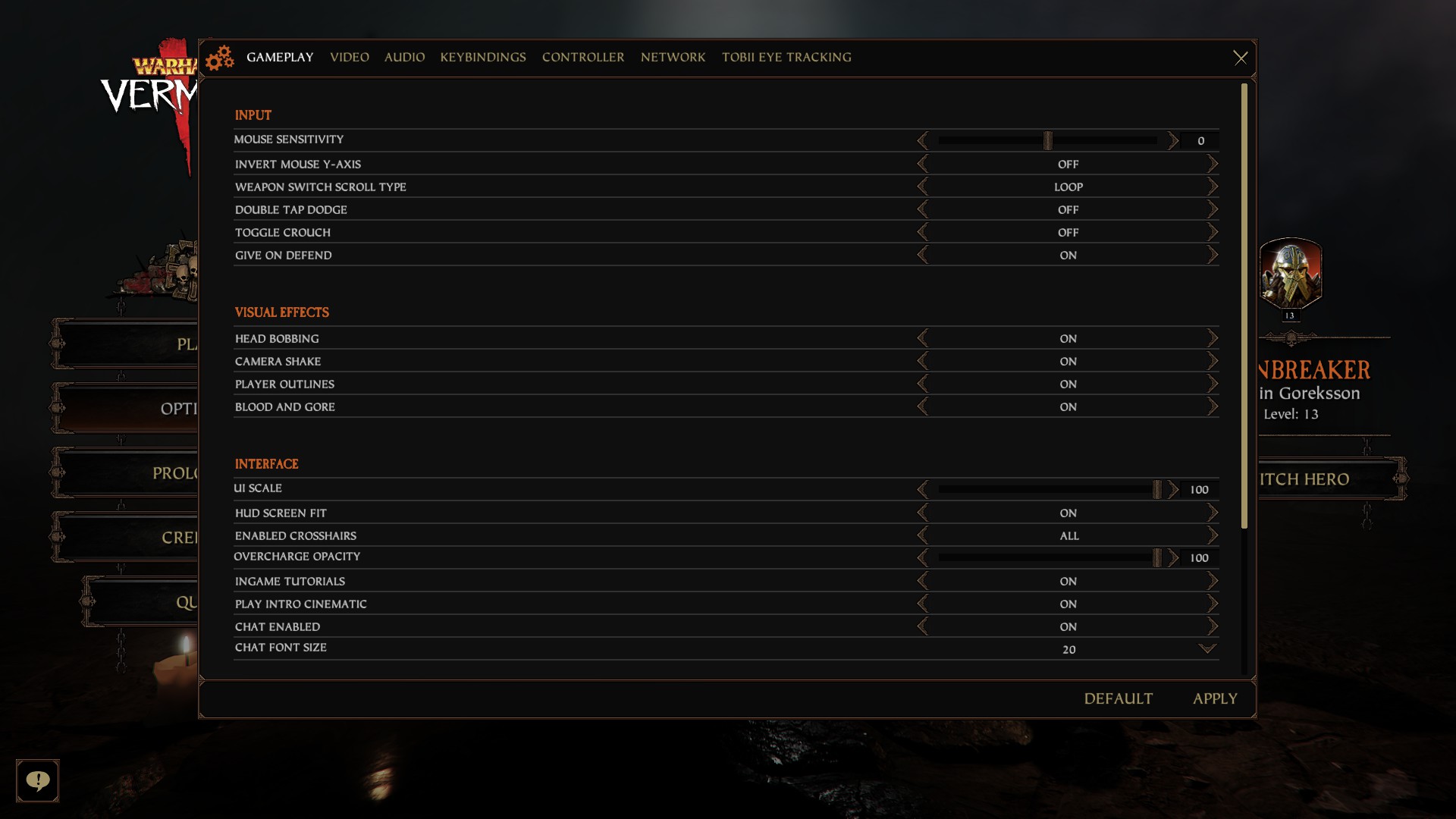 As with before you'll be put into the role of one of the five original playable characters. And as with before those characters will jab and banter with each other in thousands of lines of voiced dialogue. Mostly, they play the same as they did previously. A melee weapon, a ranged weapon, a slot for a bomb, a potion and a healing item. Click to swing a sword or cast spells or fire a bow and watch the baddies fall like dead leaves in autumn. 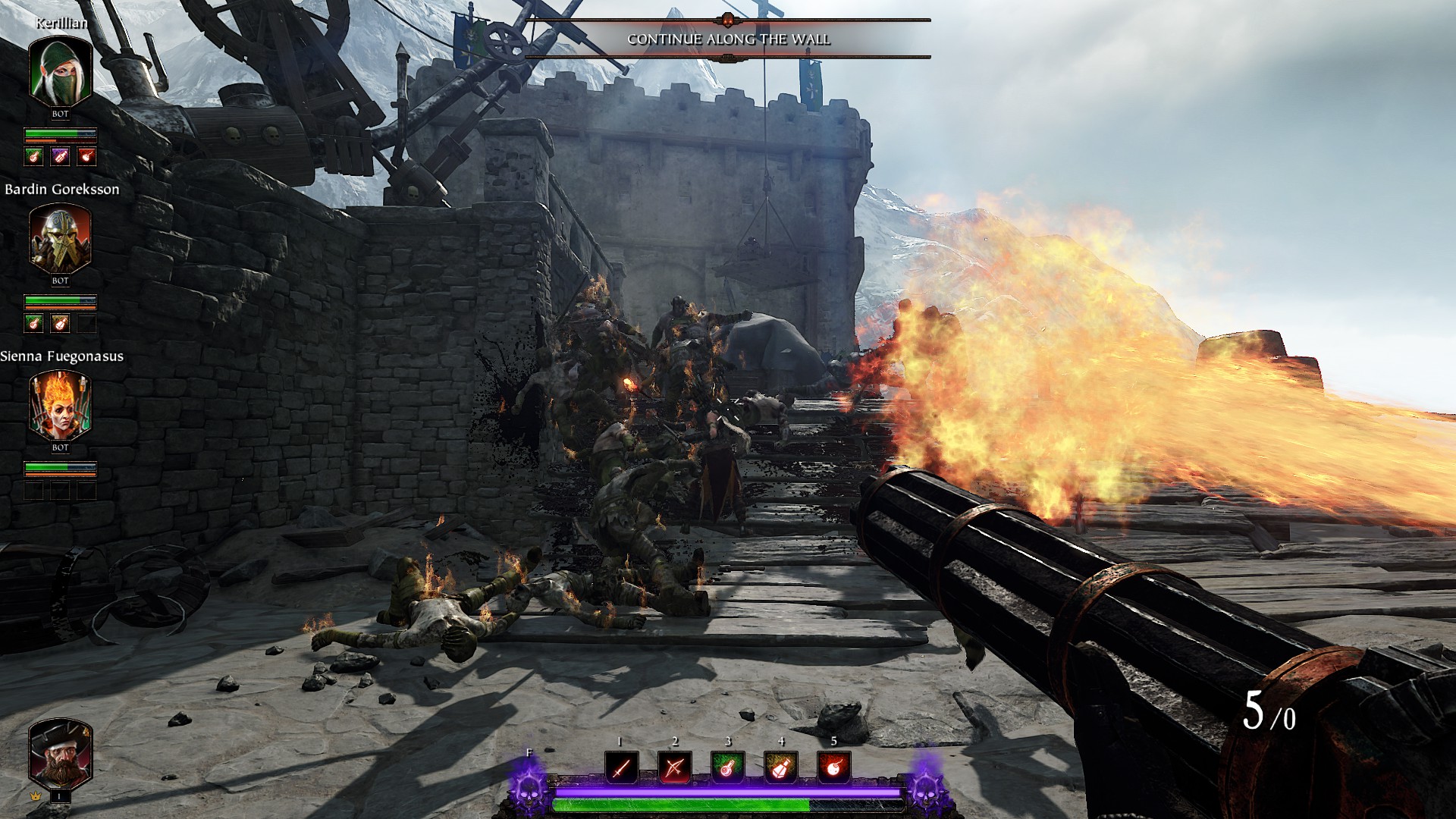 The changes come in the form of career paths. Three for each character in fact, with abilities to use now along with the standard items mentioned above. Each career unlocks as that character levels up and in a fairly short time you'll have all three to choose from and use in ways that play off each other's abilities. For instance: Bardin Goreksson gets a career called, Ironbreaker. He has more health, takes a bit less damage and of course looks a lot different in his full suit of chunky Dwarven armor. Even his venerable beard has protection. He gets a passive ability that lets him fully ignore the damage of a single attack every twenty seconds, with an activated ability, (career skill) that taunts all man-sized enemies in the area and makes him nearly invulnerable to attacks for ten seconds. The taunt works well with Kerrilian's, Shade career ability that lets her become invisible and cause high damage back stabs. Every character can and will work with another in some way. 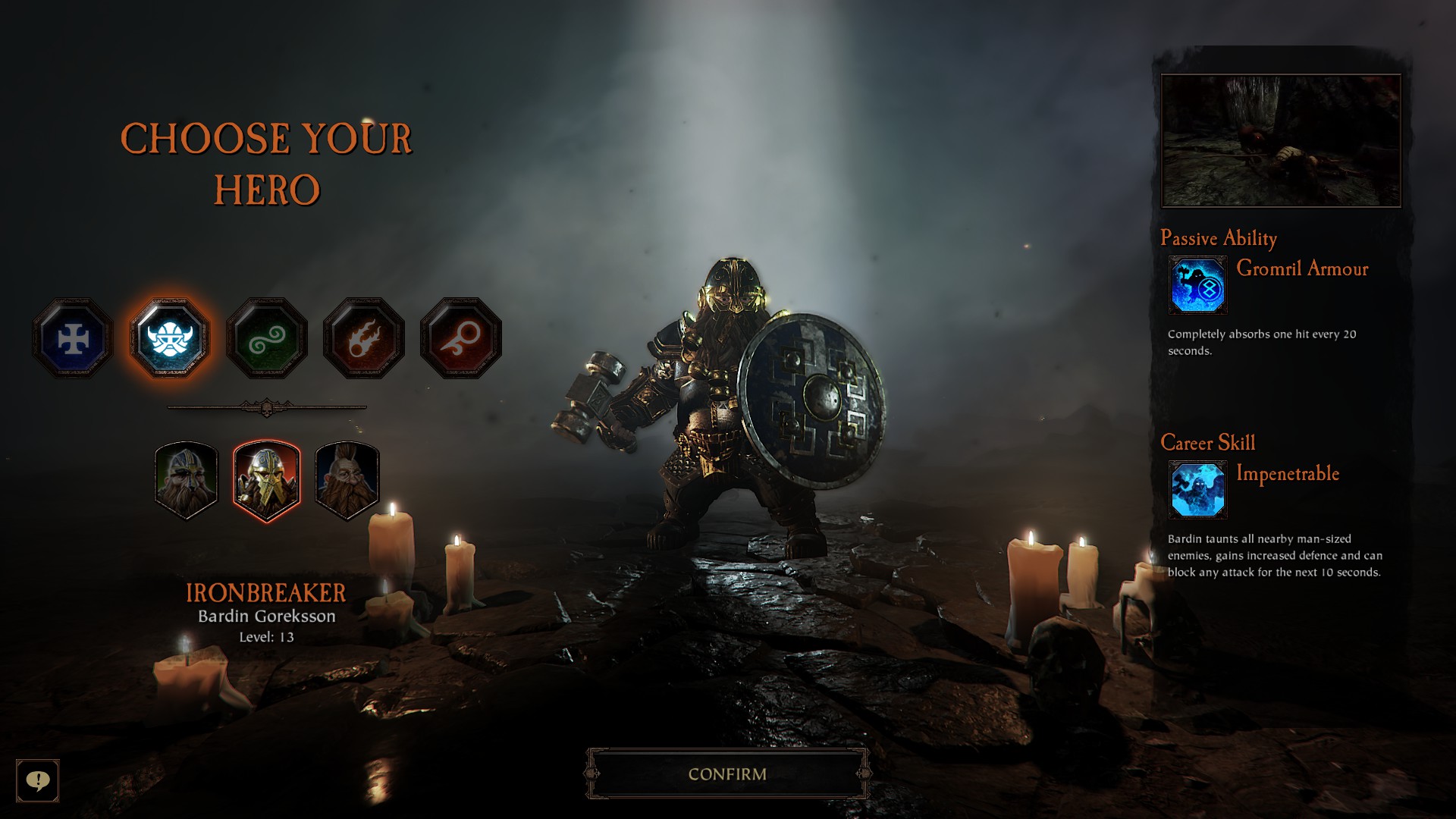 Beyond the initial abilities all heroes get a talent tree that can be freely changed from match to match. More character levels mean more talents and this new stuff brings a lot of variable play styles to the game. You're bound to find one you like. Characters now level individually as well, rather than just attaining an account level that did nothing more than remind you that you've been playing the game for extended periods of time. 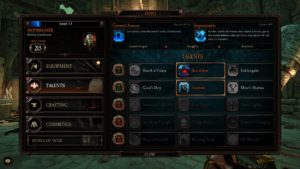 I mentioned dialogue quite a ways back. Like in the first Vermintide, the group members frequently talk to each other in this new sequel; sometimes in full conversations. In the first game they were all brought together by circumstance and tolerated each other because they had to. Get along and survive, or die to the endless waves of Skaven from Clan Fester -which the rest of the Warhammer world only regard as myth and refuse to acknowledge by the way. Of course the band of misfits eventually succeeds and drives Fester back to the Under Empire.

In Vermintide 2 the group have become friends, mostly. They have gained respect for each of their fellows in battle and have dissolved prejudices to a point. They still banter and jab at each other but it's clearly more out of respect and friendly competition than before. They've unified and that's created pretty cool feeling arc for everyone. 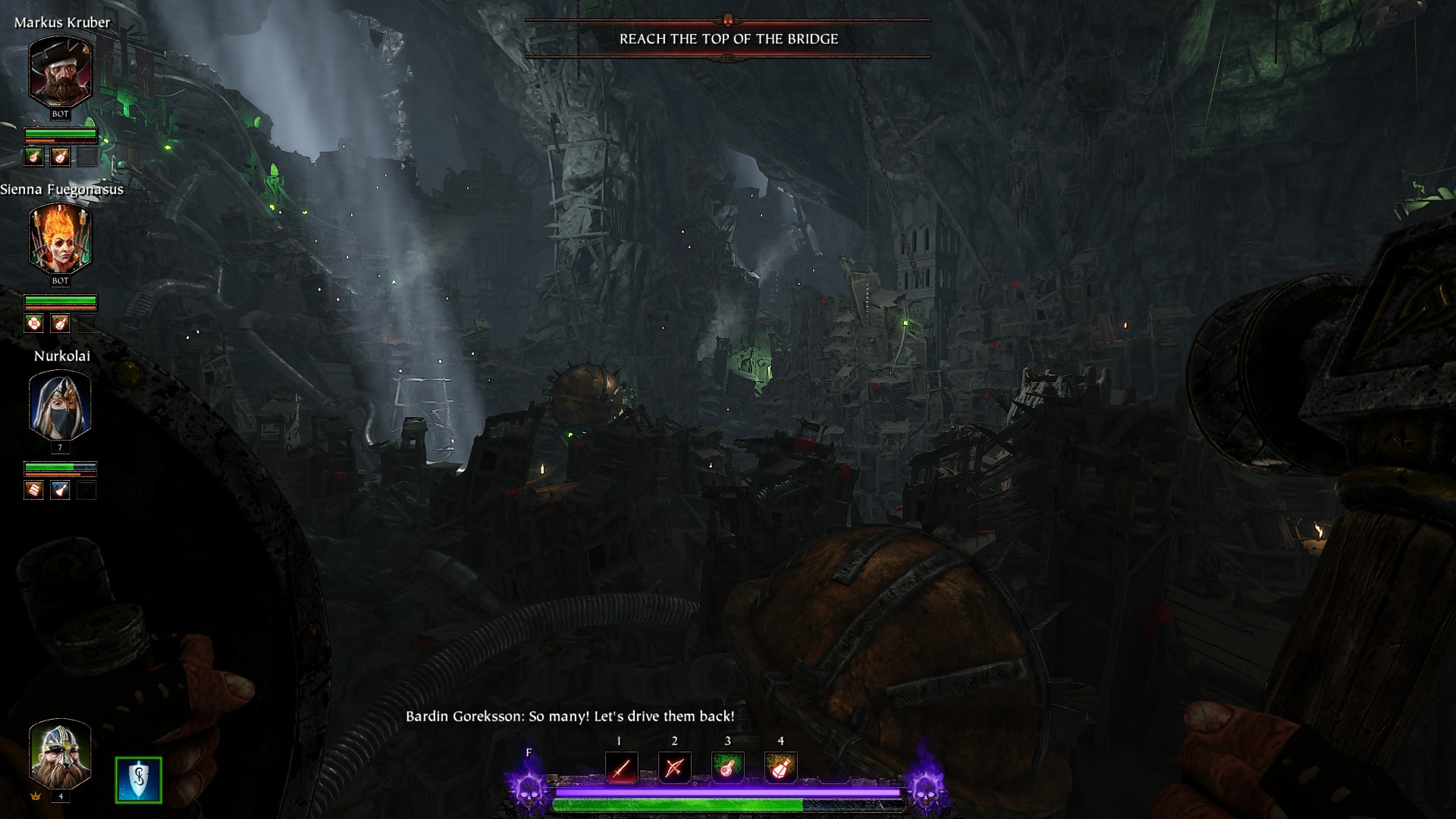 Everything in terms of the character controller is standard and comfortable. W,A,S,D for movement, space for jump, "E" to pick up items and "F" will activate the career skill. Number keys will select items on the hot bar to be used and "Q" will quickly swap between your two weapons. Left click to attack or use an item, once selected. Hold Left click to charge attacks. Right click to block and holding that will keep your block up. That same button will also give a selected item to another player or bot. It's all very simple and familiar plus you have the option to rebind keys should you wish. 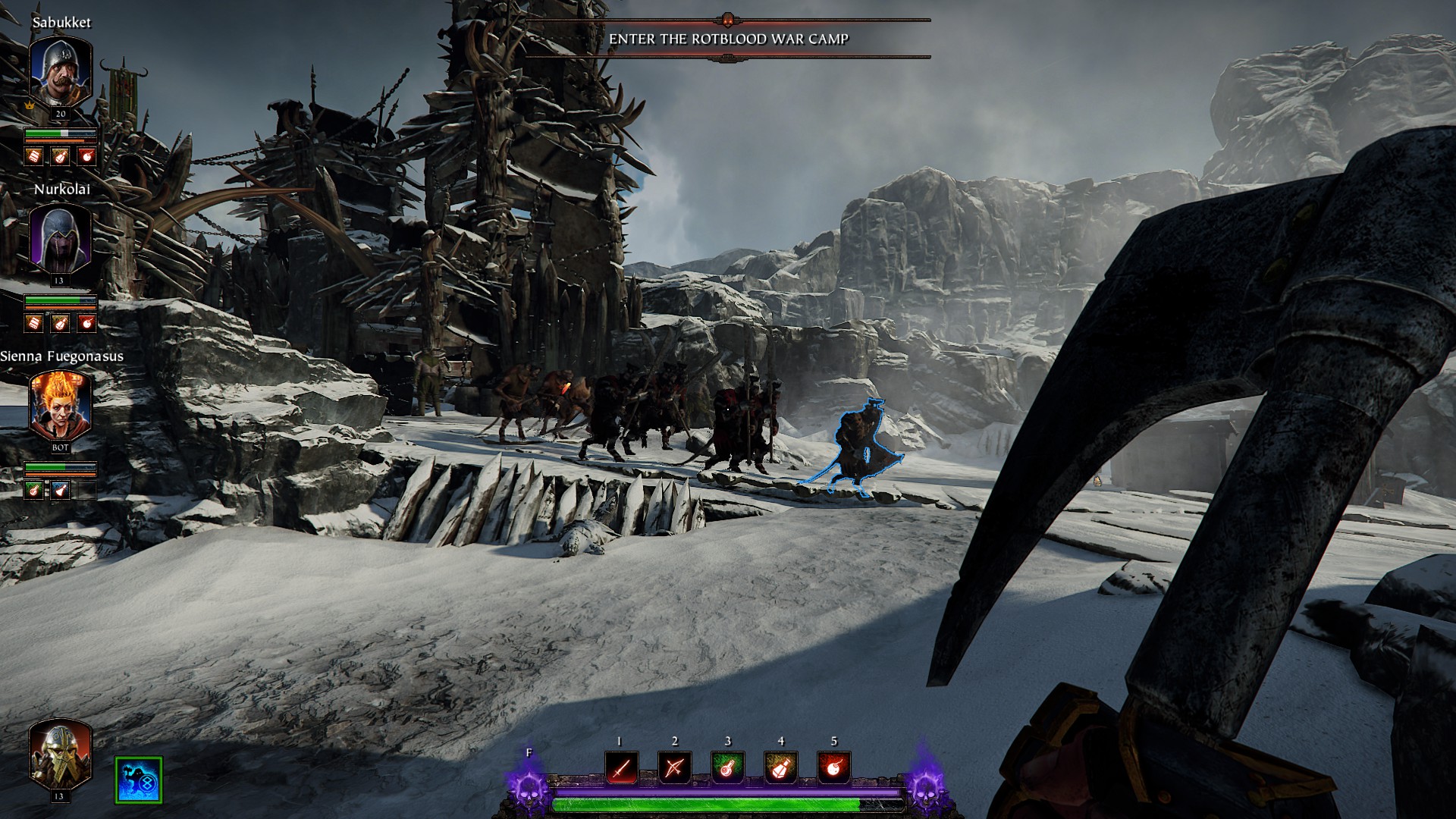 On top of the reappearance of Clan Fester, the leader, Rasknitt has penned a deal with the Nurlge worshiping Chaos Warriors of the northern wastes. Basically this means we just get to fight the diseased and rotted Northmen in much the same fashion as the Skaven. They come in waves of relatively weak Plague Zombies, to the stronger special, Executioner Marauders and dreaded elite, Chaos Warriors. Like the Skaven, the Northmen will patrol areas looking for a fight and should you meet one at the wrong time it has the real potential to end your session. 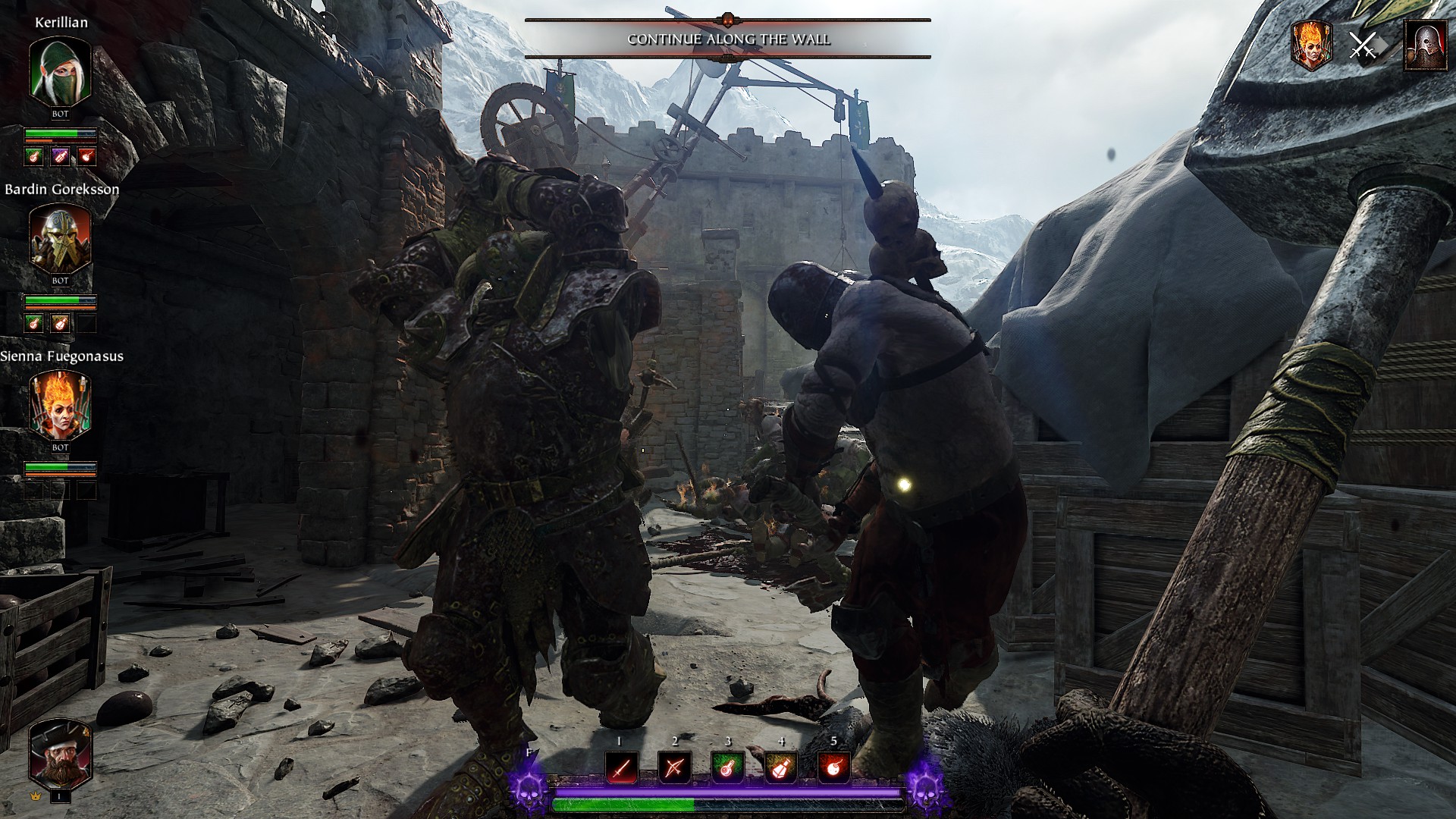 Along with the addition of a separate faction to threaten the world during the End Times, some new additions to the armies of chaos have been brought to bear. In the original game there were plenty of problem bad guys to hound you on your many missions: Gutter Runners, Globadiers, Pack-Masters, Stormvermin and Ratling Gunners aplenty. Your only original boss was the hugely powerful, Rat Ogre.

The Ogres are back, but also with the new shield bearing, Stormvermin, Skaven Slaves and Rotblood Marauders to fend off attacks while the hordes chip away at your health. Plague Monks come in groups with maddening screams and poisoned daggers. Rotblood Berzerkers leap into battle wildly swinging dual axes. The Leach will lock a player in place draining health until they fall unconsious. Chaos Sorcerers unleash whirling blight storms to toss you out of the fight. Warp Fire Throwers blast the group with gouts of green flames. Stormfiends trample burn and knock group members about. Chaos spawn will attempt devour players and Bile Trolls will regurgitate a blinding, sticky acid while pounding players into mush. 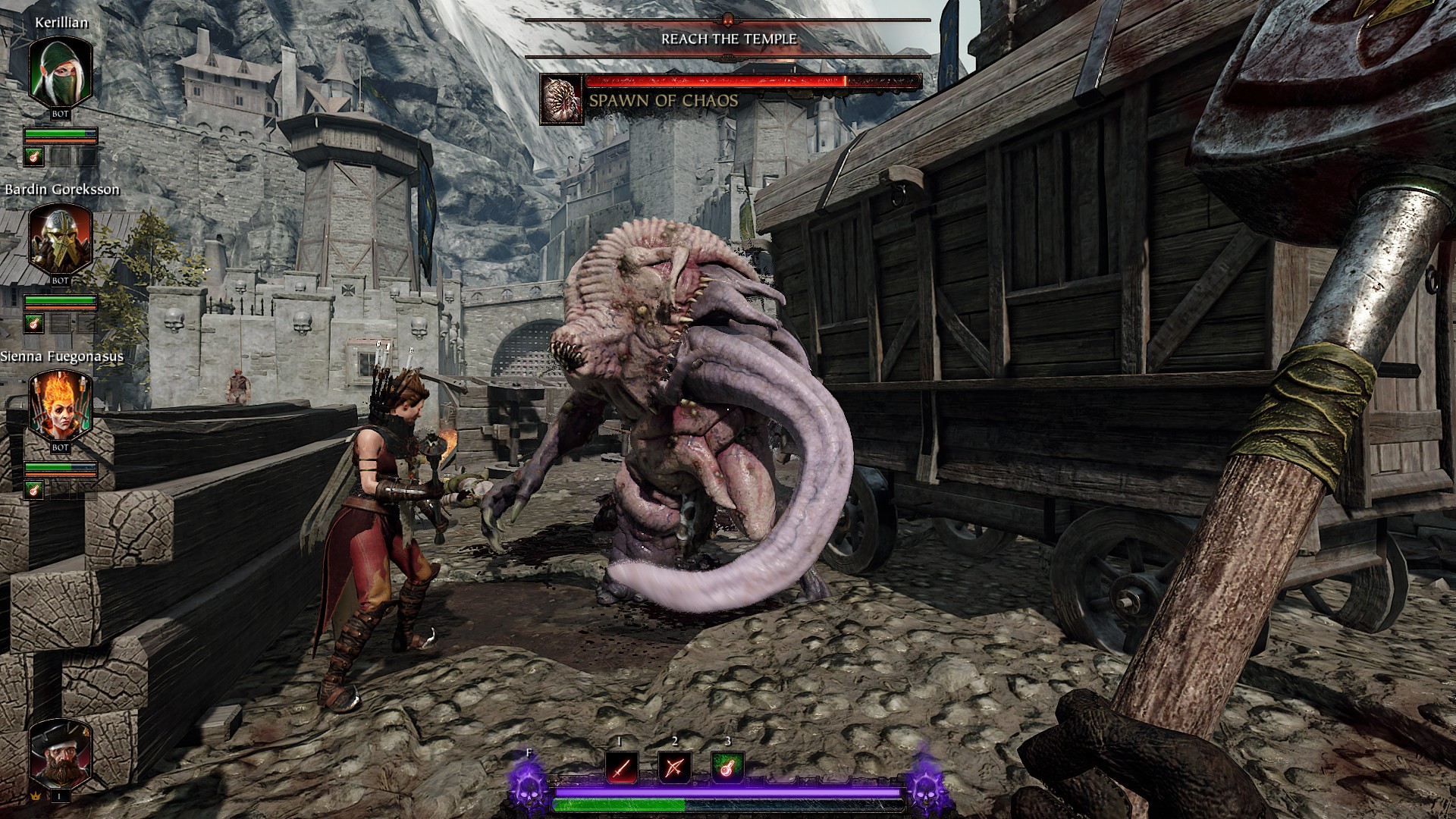 Not mention there are actual boss fights with mechanics to follow and patterns to learn. The original Vermintide had this as well toward the end of its DLC cycle in the form of, Krench. A powerful captain of Clan Fester's, Stormvermin. 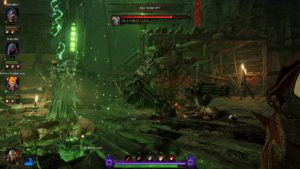 This is all well and good. It helps freshen things up with some variety, but the mechanics to combat the hordes are much the same as before. Use headshots and attack weak points to take down bosses and as much ranged sniping as possible will remove elites from the fight to help you succeed. That doesn't mean it's less satisfying though. The previous formula worked wonderfully and even though this sequel feels very similar there are tweaks to balance the character abilities against general combat and the overall difficulty is higher. Also on the plus side, Fatshark have improved the weight and feel of swinging a giant hammer or sword and shield into a group of slavering rat men. Even changing the way weapon stats work now to include a power level that goes toward a hero's overall strength, along with percentages that affect attacks and stamina etc. High level, exotic, versions of weapons actually greatly improve specific abilities. I've yet to find any of those though as my group of friends and I are only just coming out of "Recruit" difficulty. 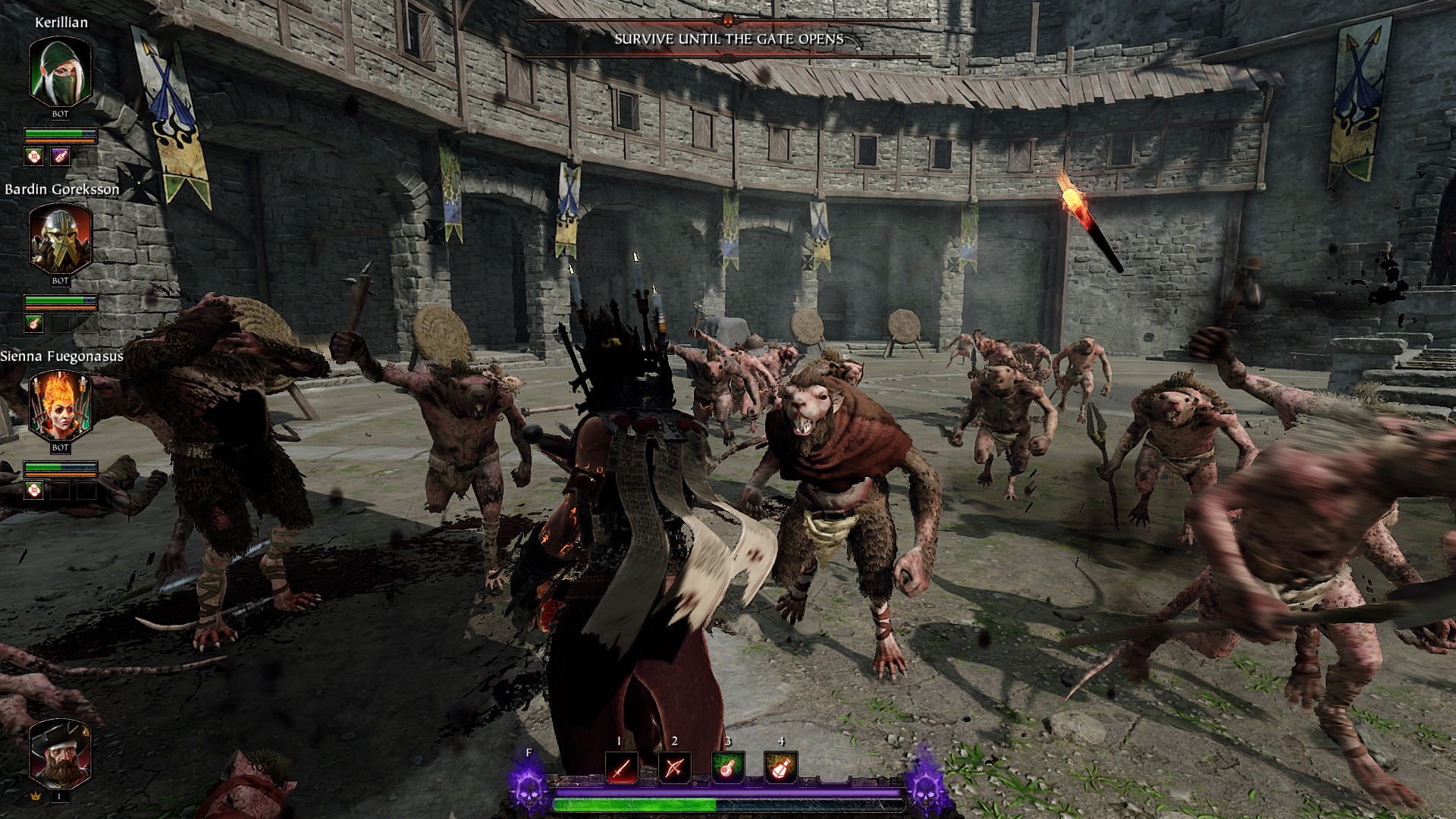 I hold out hope for the addition of Warp Lightning Throwers and Doom Wheels to fight against in future DLC packs. I'd also love to see a new lore book to give us all information on the myriad of new enemies. I expect there will be many good things to come.

Of course you can't have an immersive battle with thousands of Skaven and Chaos Warriors without proper sounds and music to go along with it. Luckily the devs have given us more, (and this term is greatly overused) visceral noises as we bash armored Stormvermin with maces and burn Plague Zombies to dust with Drake Guns.

To bring up the first game again, Vermintide had great sounds and music as well. But the sequel has even improved on that front. I don't know what it is exactly but everything just sounds bigger and better and that helps you feel like you're a part of all the mashing. 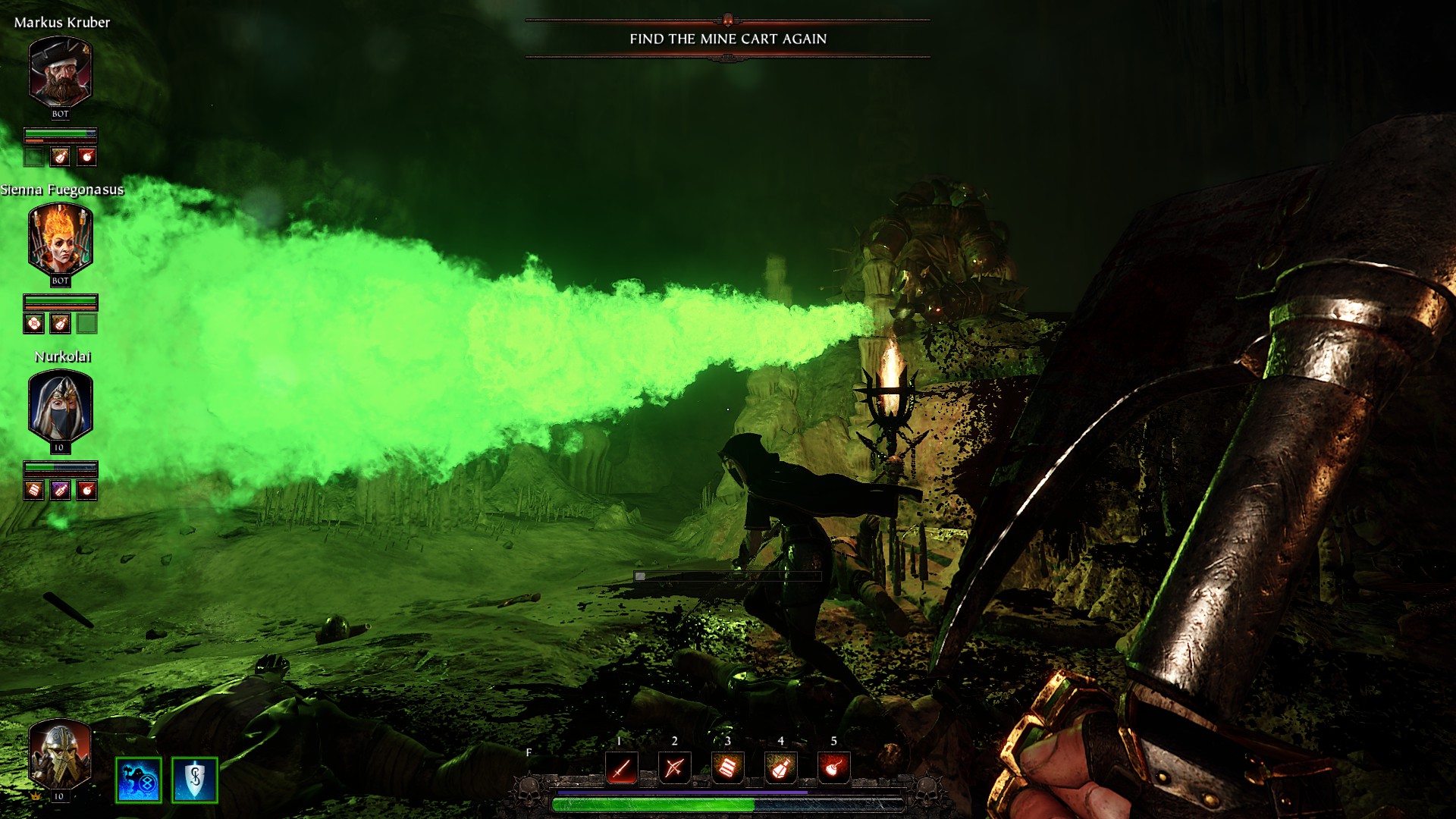 And of course none of this works without well designed levels to traverse. Thirteen wonderfully built, beautiful maps have been placed in reach of our grubby hands. They're bigger than the typical levels in the original game and they seem to flow 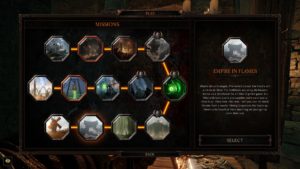 better for the most part. At least it feels that way to me. From caves, to open fields, to cities literally sliding off cliff sides there is plenty of variety in the way of level design. Not to mention those big reveals when you happen to come to an edge or overlook. 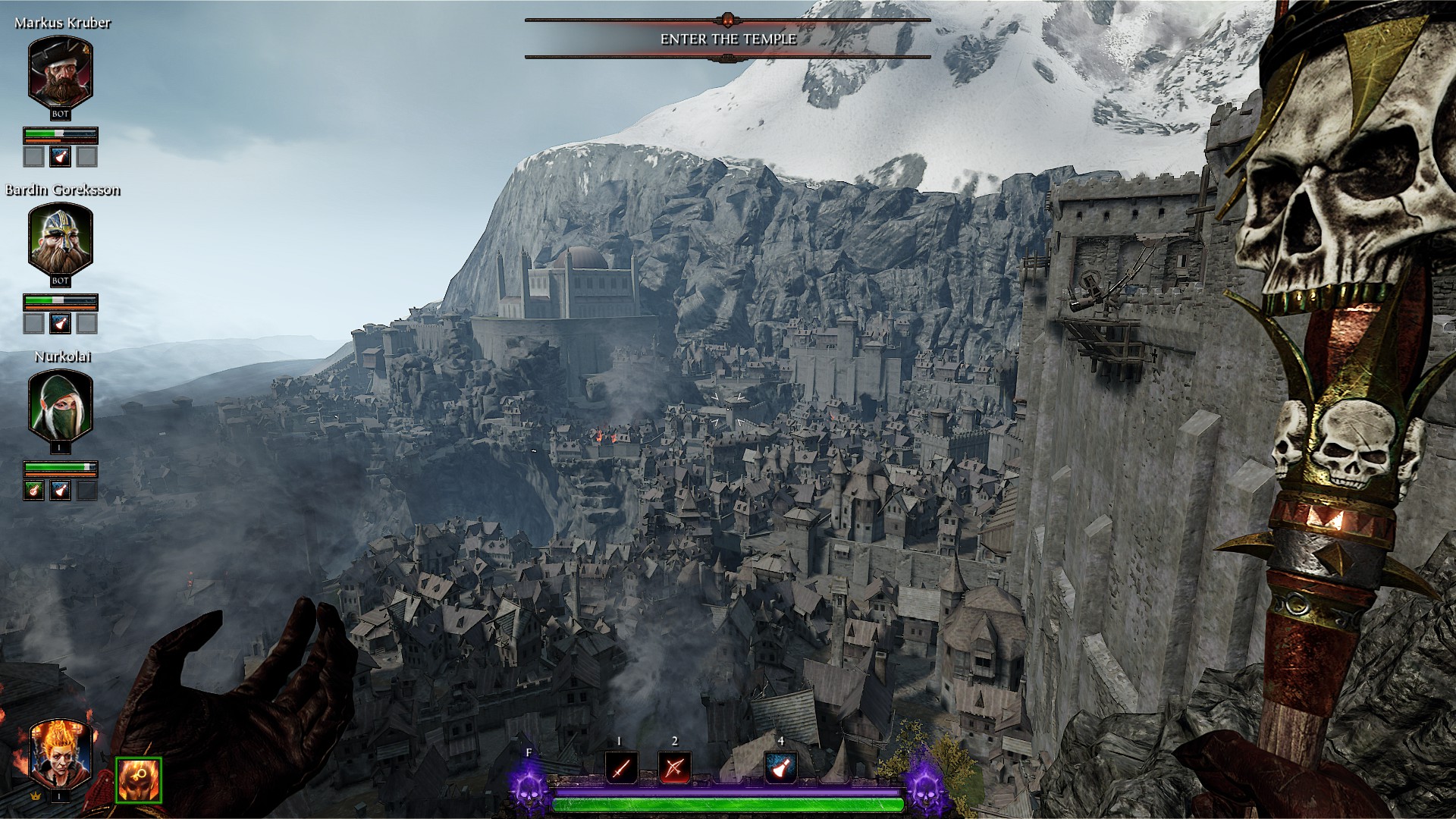 So all in all I'm really happy with Vermintide 2. It's one of those rare cases where the sequel outshines the original and is a fantastic addition to my game library. And you know, I didn't mention it above but there are no paid loot boxes. Everything you can attain is yours through play. So far the following is pretty big and it's made more money in the first two weeks than the original did in it's entire life cycle. If that's not a sign that the, "games as a service" model isn't a necessity then I don't know what is. Props to Fathshark for doing its fans a solid and not jumping in the sweaty hot tub of greed that so many game companies are currently wallowing in.

So, would I recommend it? The answer should be fairly obvious but, yes I would 100% recommend Vermintide 2. It's only $30 on Steam and I'll speculate that there are sure to be lots of good expansions and additions. Make no mistake, this is a title that's better played with friends. However, if you played the original you know what you're in for. It's just better in lots of ways. If you never did, maybe now's a good time to check it out. 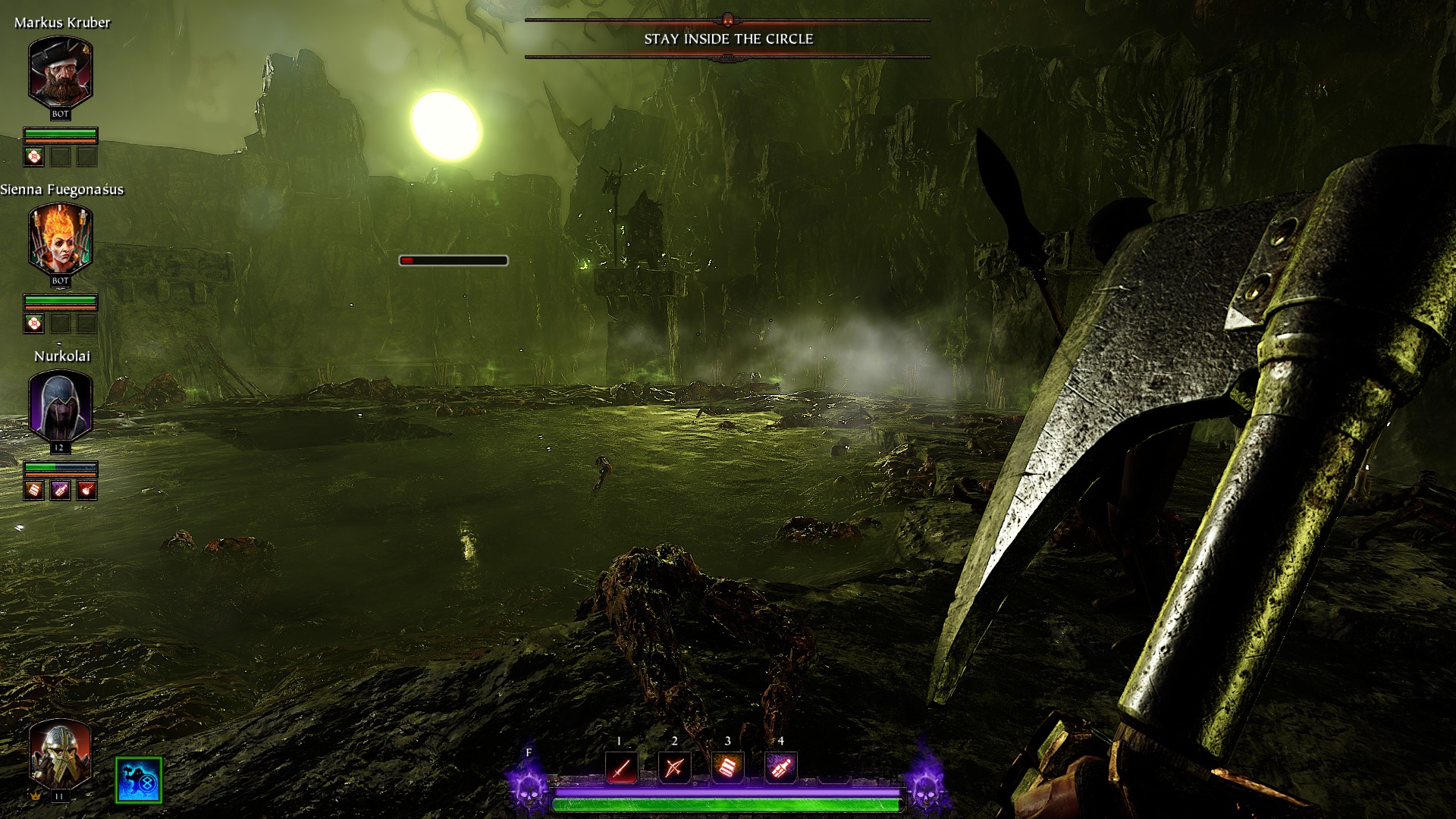 System Requirements for Warhammer: Vermintide 2 are as follows