Recently we did a play through of Alan Wake for Twinstiq Game Club and after it was over I had an itch for a good fast paced shooter. I had played Doom not too long ago and as good as it was, I didn't want to start that over again quite yet. I Considered Rage: It was fun and it had some cool elements even if it was hampered by poor texture resolution and lots of pop-ins. Then I saw a rumor going around that there was likely going to be a remaster of Bulletstorm in 2017. "That could be fun" I thought "I haven't played it since it was new". And guess what? It holds up pretty well. Be forewarned that this article contains some bad language... because it's about Bulletstorm. 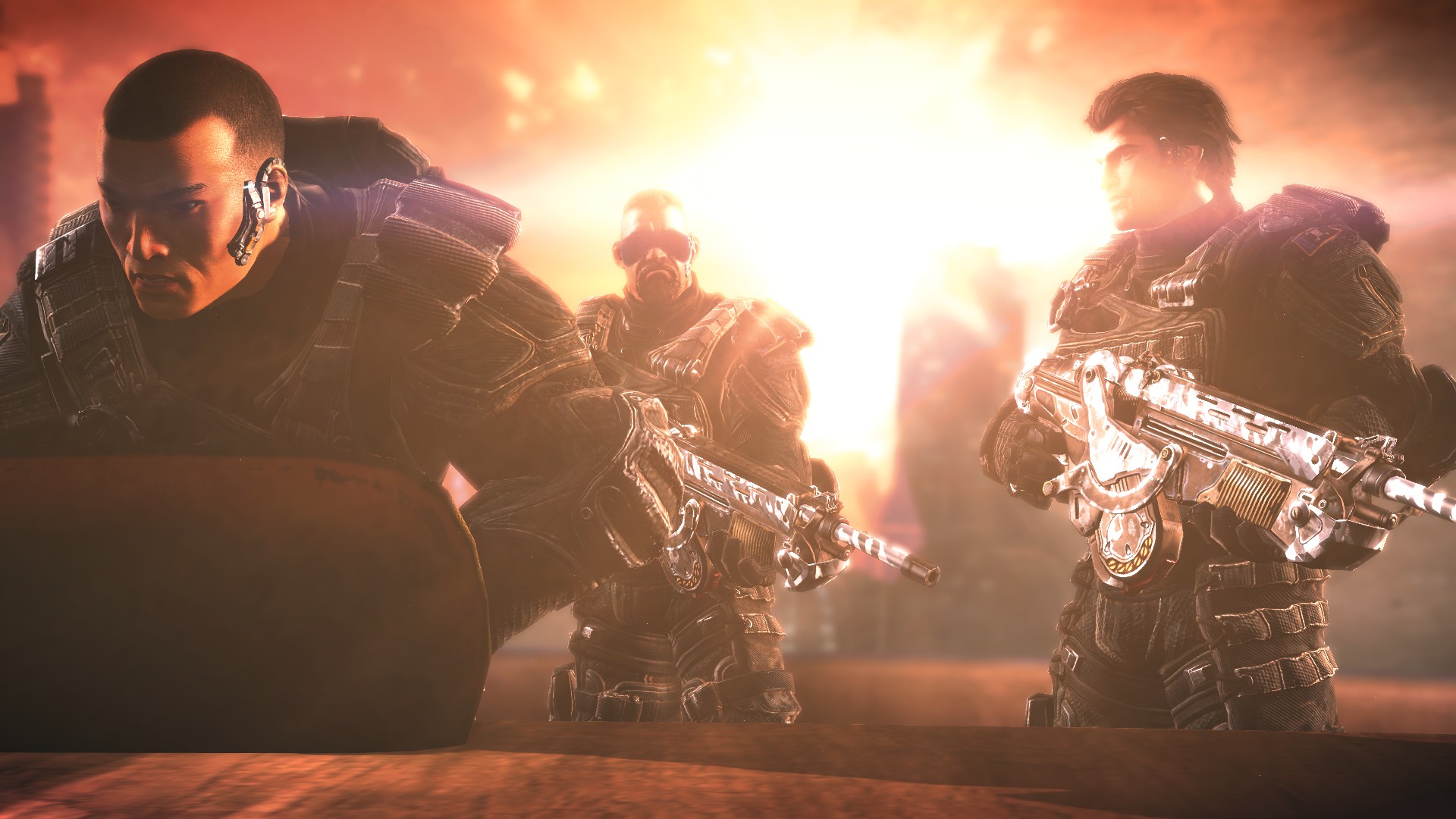 So when I first fired up Bulletstorm I got an error message that told me the game wouldn't work any more because of the fall of Games For Windows Live--Thanks Microsoft. I did some research and it turns out lots of games got left behind during the end of GFWL for various reasons. Luckily there are fixes and they're easy. I just had to go download a small zip file containing a couple of dll's and extract it to the proper folder <Path to game folder>\Binaries\Win32. I'll provide a link here for the site that provides the file needed to disable GFWL. Note that this is not a cheat, it's not intended as a hack, it's only purpose is to disable a defunct drm check that won't allow the game you purchased to run. The only downside is that they will remove the ability to play any form of multi-player. Anyway with that fixed I was kicking and sliding and shooting bad guys in no time.

...Bulletstorm holds up really well, you'll see that right away. Character models look good if a bit generic and lighting and texture effects hold up well even by today's standards. The world building provides us with some nice looking, distant views and interesting levels to move around in. This is not an open world game but the designers have provided a feel of a larger world than the player is presented with. It's also very colorful and bright... something newer titles seem to lack empirically. 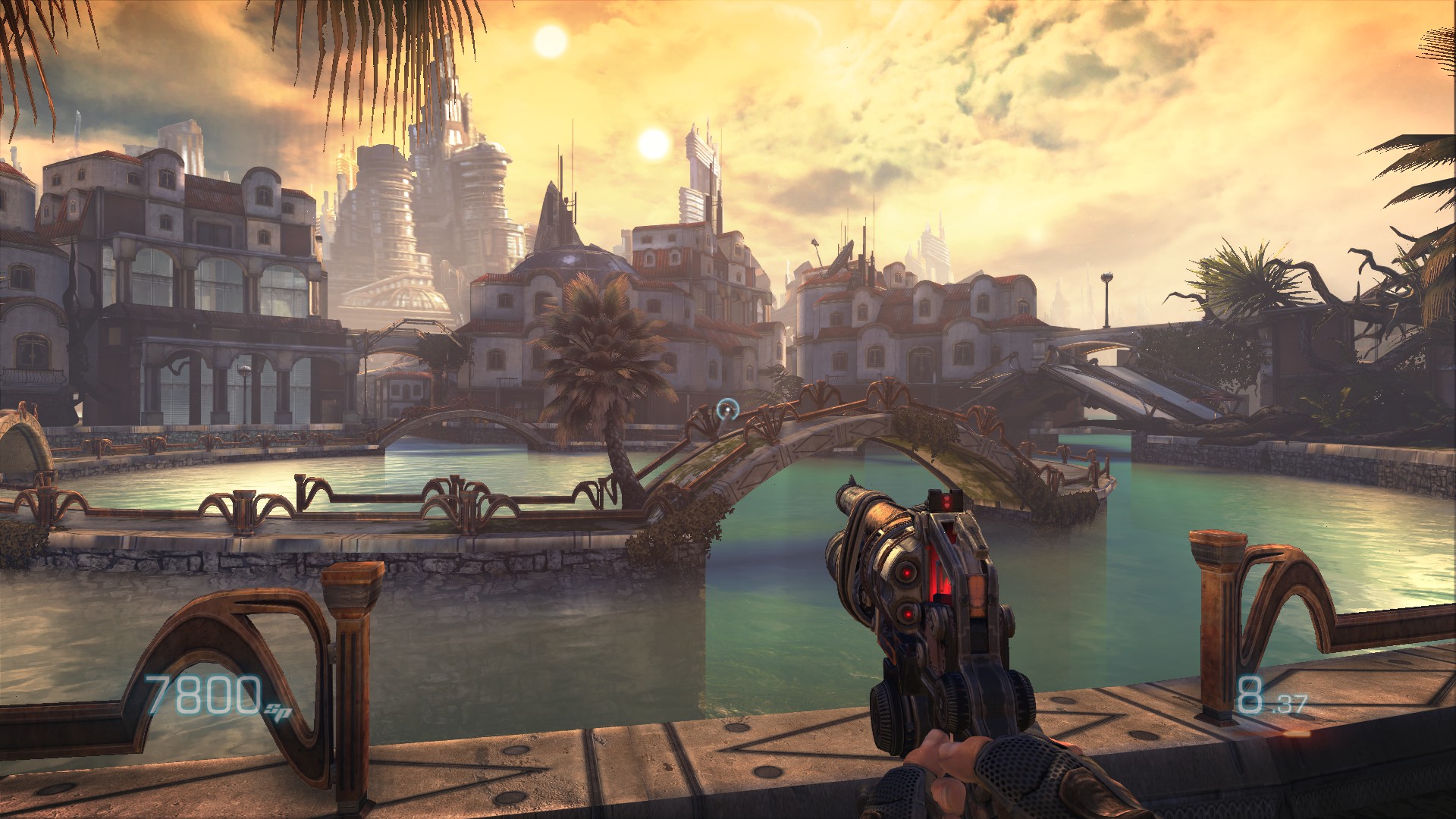 Let's look at the UI for a second, it's very simple and unobtrusive. I happen to think that's pretty important. Lots of titles these days have so many things on the screen distracting you that it's hard to tell there's even game behind it all. Not this one. Bulletstorm is a very arcade feeling shooter and doesn't use health or armor indicators, so right away that's at least one box that's not taking up a corner of your screen. 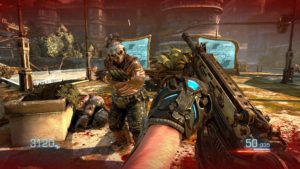 You can see in the image to the right (click any image for full screen) just about how busy the UI is at its most critical.

To the left of the screen is the score collected for use in the Skill Shot menu. I'll talk about that further down. The right side contains ammunition information. Two bars can be seen below the ammo numbers, those are secondary fire counters. The blue bar is secondary fire ammo for the leash (keep reading), the red one is for which ever weapon your holding. That's it. Of course you can also see the red border at the top and bottom of the screen telling me I'm eating too damn much lead and I should find cover so magic video game healing can occur. And the only things that can make it busier are [occasionally] the score system, dialogue subtitles and interaction messages, I.E. press "R" to use. It just makes for a clean feeling experience.

From a technical standpoint...

...This is also a very well optimized game. I know Bulletstorm is almost six years old now but my computer doesn't even act like it's trying to run it. Temperatures stay low, like barely above idle and the game runs at a very easy 60 fps. It is however locked at 62 fps for some reason or other. That same link above containing the dll files will also direct you on how to unlock the frame rate if it's important to you.

Now this is very interesting to me because even older titles like the aforementioned Alan Wake would even run the temps up on the CPU and GPU. I run both games on the highest settings and Bulletstorm would show CPU temps of 46 degrees C and GPU temps of around 70 degrees C. Pretty Tame really and as I said earlier, barely above idle. Alan Wake on the other hand would run the CPU up to about 59 degrees C and the GPU even above 80 degrees C. For comparison, my CPU and GPU usually idle at about 44 degrees and 60 degrees respectively. Now the two titles here use different engines (Unreal Engine 3 for Bulletstorm and "Alan Wake Engine" for Alan Wake) and probably have different polygon counts etc. but the fact remains that Bulletstorm is clearly well optimized and that's a big plus for everyone. As you'll see at the end of this article the system requirements are almost laughably low, even for 2011. 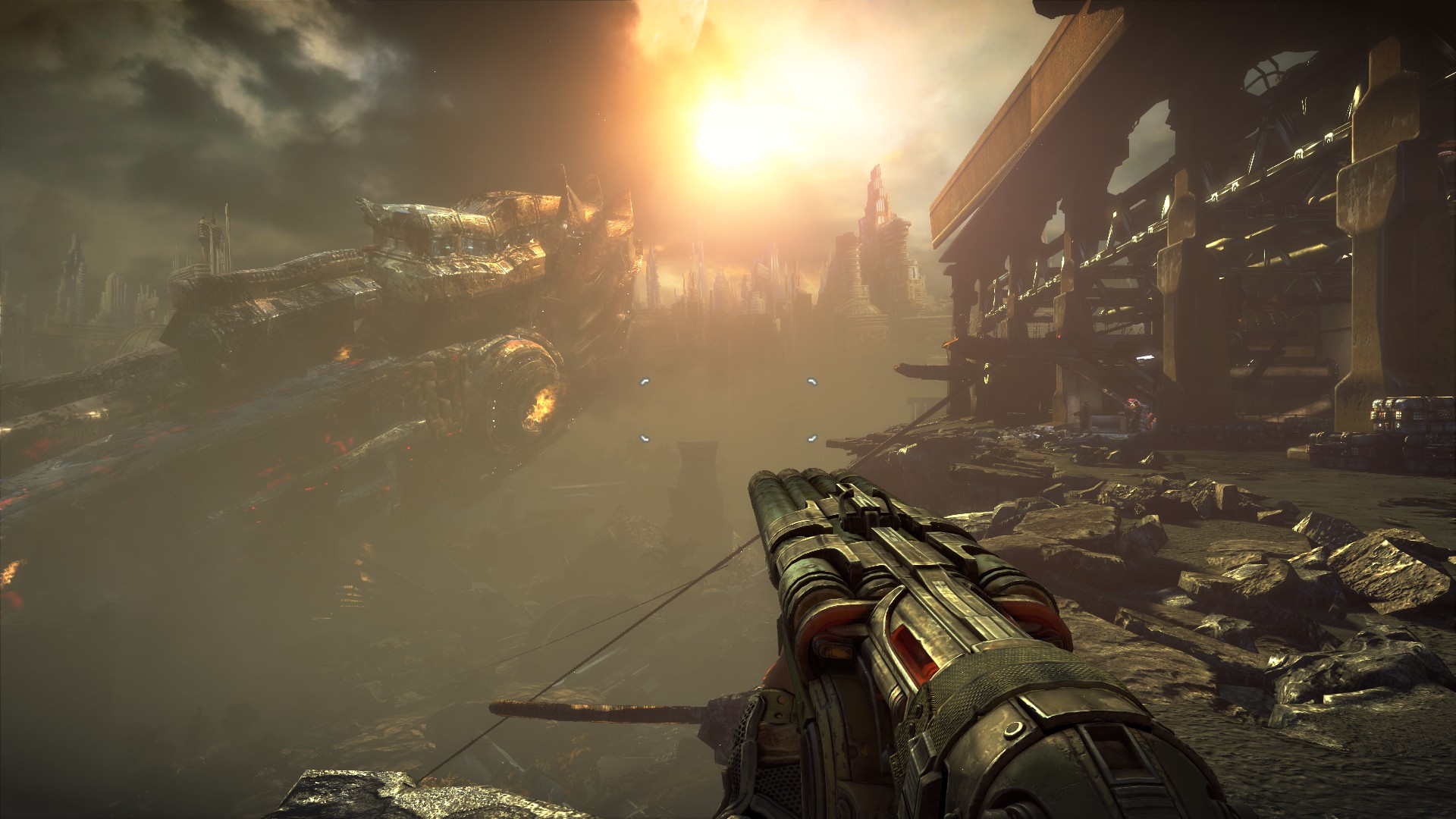 ...Is fast paced and fun. Players are given the standard assault rifle as a starting weapon and it does the job pretty well, throwing rounds down range at a blazing fast rate. The player can also "kick" as a melee action using anti-gravity boots which will send enemies into the air in slow motion providing a flying target for the guns. Kicks can also land enemies into environmental hazards like: cactus, hanging electrical wires and explosive barrels. 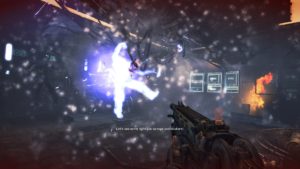 Early on a special weapon called The Leash is acquired. This is essentially a beam of energy that latches on to whatever it touches and pulls it toward the user. With some ingenuity one can kick an enemy into the air, leash them back, shoot them and kick them again into a giant cactus before they hit the ground. This super creative and fun way to bash baddies is used to unlock what the game calls Skill Shots. A score is built based on those Skill Shots and then used to purchase upgrades and ammunition for each weapon. 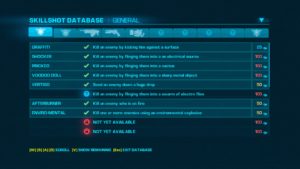 As for enemy types, there aren't overly many but there are enough so the game doesn't feel lacking. What we get are different "gangs" of human and non-humans with the typical melee, assault, sniper and heavy classed mobs. Along with a couple of specialized enemies in the form of mutants and super soldiers. There are even a few boss fights, though they feel pretty basic.

The biggest issue with the combat system is that this game uses the occasional quick time event. Boo I say. But there's really only one place in the campaign where that's as disappointing as one would expect it to be. I won't spoil it but by the time you're there you really want to be allowed to perform the action without a scripted prompt.

Level design is fairly simple but not so much as to be boring. Bulletstorm is basically a hallway shooter but because of the open look of the world it doesn't always feel like one. There are plenty of objects to vault over and take cover behind similar to Gears of  War, also by Epic and People Can Fly. The player can double tap space bar to slide under objects, even close the distance and attack enemies.

In the menus, lots of settings are given to make adjustments in the form of sliders and check boxes and most can be done on the fly with only a select few requiring a restart of the game. Difficulty can be changed on the go if things get too easy or hard for your wholly unstoppable or mamby-pamby ass. 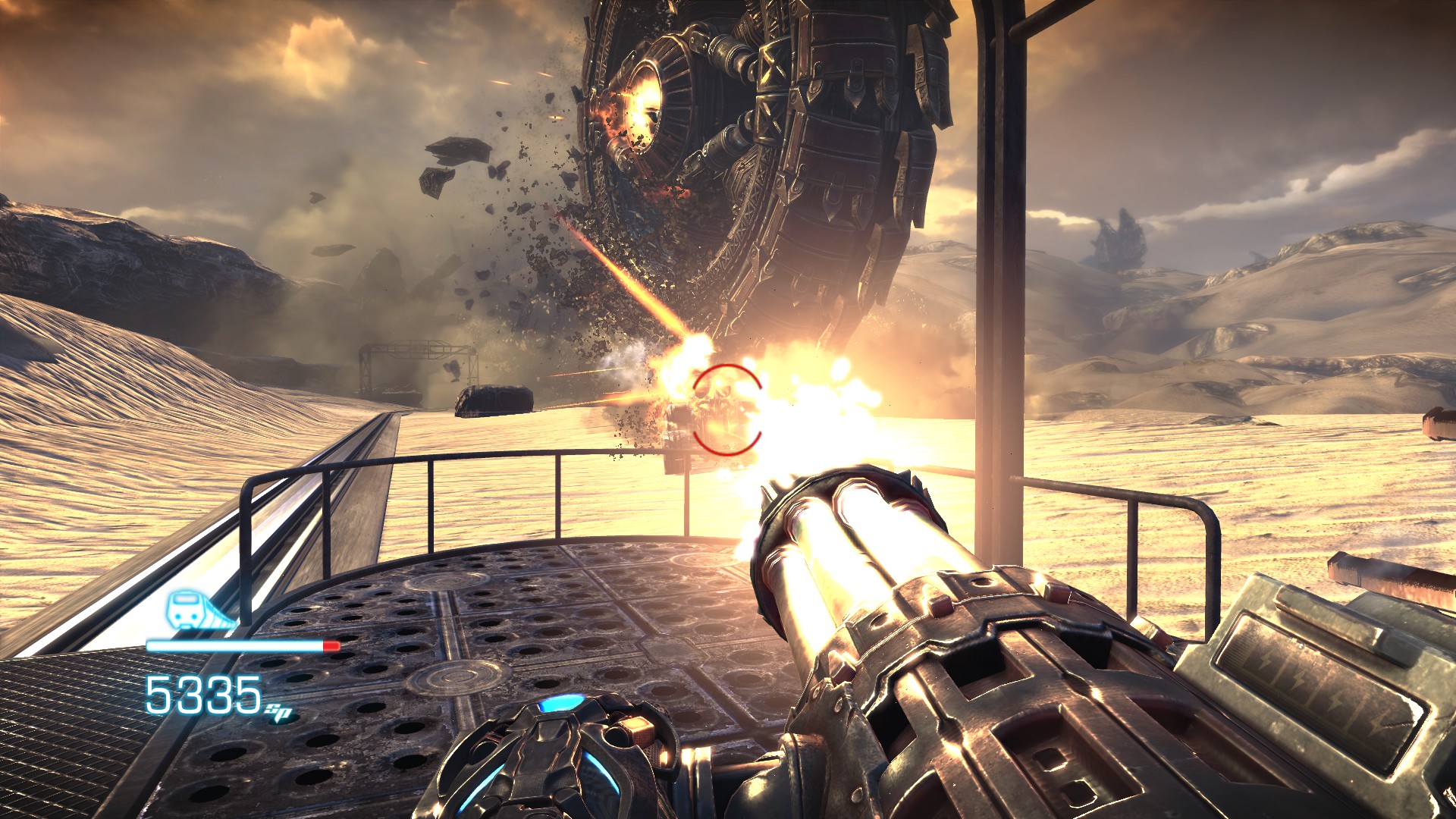 ...Is all pretty darn good if I say so myself. Bulletstorm's initial score is actually quite energetic feeling, allowing players to get kind of pumped up in the start menu. Likewise combat music feels appropriately crunchy and quickly paced.

Explosions sound as powerful as they look. Guns sound like guns, as well they should and menu sounds are simple and thankfully not annoying. Character and enemy sounds are not exceptional but are certainly serviceable. They contain anything from grunts and roars to goofy one-liners. Dialogue itself is usually pretty clever, silly and astonishingly profane. Be warned of that. The use of bad language and sexual connotation is downright egregious and quite frequent. So if that kind of thing bothers you, sir or madam you have purchased the wrong shooter. 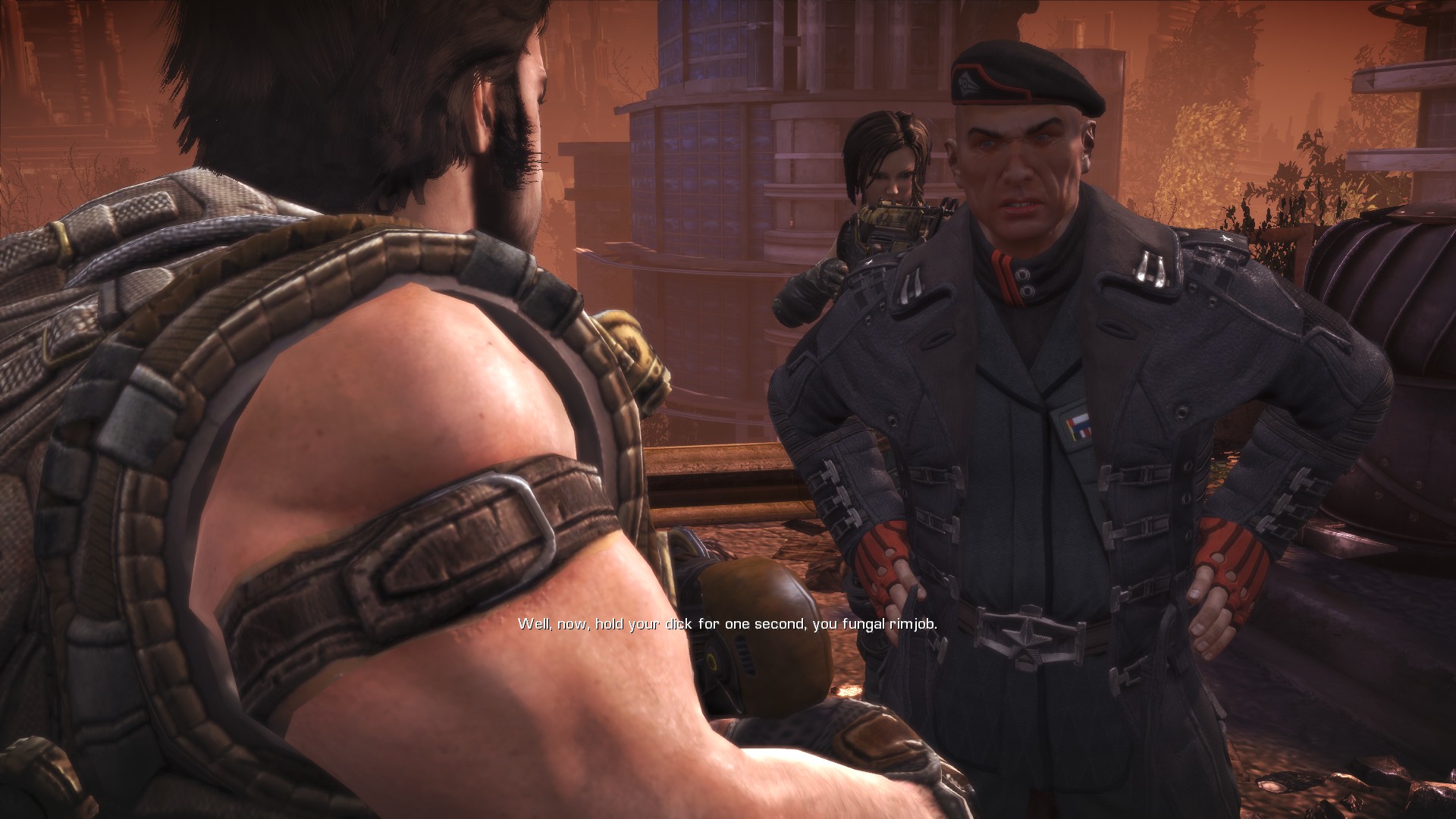 ...Is actually much better than anyone should expect from such a silly, fast romp of a profanity littered, blood stained shooter like this one. Characters have personalities and arcs that flow pretty nicely. The voice acting is pretty top notch and let's be honest, listening to Jennifer Hale curse like the saltiest of sailors is pretty rad. I don't know how the actors said some of the things they did with straight faces. I certainly got more than one good chuckle.

Check out this link to the Bulletstorm wiki  if you want to read about it in detail. Just be prepared for lots of spoilers.

Bulletstorm is loads of fun and hopefully the rumors about a remaster are true. I'd love to see an updated version with a few refinements. Although after playing it again it's tough to see what the studio would add to the game to make it better. Maybe a 4k option would be cool. I think this is only 32 bit, at least the system requirements would lead me to that conclusion. It'd be nice to see that converted to 64bit. Of course being re-rendered in Unreal Engine 4 would be awesome. Obviously removing the drm check for GFWL would be a welcome addition. But really, this title is a pretty prime example of design done right for the time it was produced.

People Can Fly has risen from its long sleep and is still working with Epic Games. They still have the Bulletstorm IP, and claim to be working on something currently. So who knows... maybe we'll even get a sequel some time down the line?

So the question of the hour is, would I recommend Bulletstorm? Yeah I would with a few caveats: Make sure you're not offended by bad language and heavy violence. Be ready to download a couple of drm bypass files and have the knowledge of how to put them in place. Finally, related to that drm bypass, don't have your heart set on multi-player because without Games for Windows Live, there is none. It's unlikely people would still be playing multi-player after so many years anyway I guess.

It's only $20 on Steam and I think that price is still pretty fair actually. The campaign is fun and well paced. Play time is relatively short, my run through took about seven hours but there's an option to re-play chapters in the menu. Plus, [importantly] there's a free demo so you can check it out before you buy. I'm really glad I played this one again and I even made a quick game play video for the TwinstiqLP channel if you're interested in seeing it in action. Now, I think I might just go ahead and reinstall Rage too... 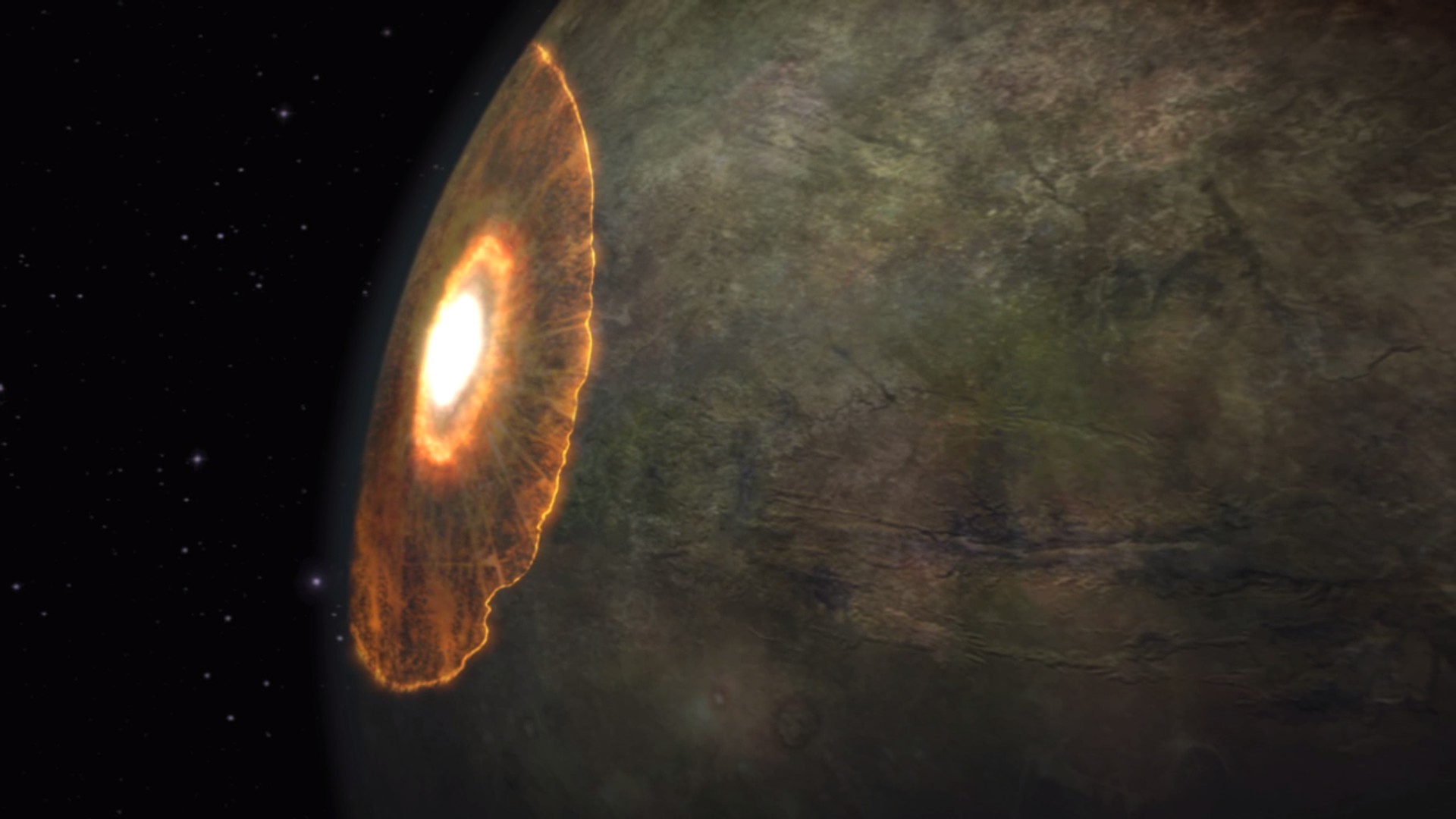 System Requirements for Bulletstorm are as follows:

[As of the time of this writing the dll files used to bypass Games for Windows Live are safe. I would always recommend scanning any downloaded files before using them. Twinstiq has no affiliation with Pc GamingWiki.]