I've been playing SnowRunner for nearly six hundred hours and I'm only into season four of the game. Let that sink in a minute. Five hundred and eighty-ish hours of driving around in the mud, snow, through and over ice covered lakes and rivers at around eight miles an hour. It sounds boring AF but man I love this game.

There's a lot of critical thinking about how to get from A to point B. About which problems to solve first as they may help you in the near future when it comes to getting a delivery somewhere. Should I repair this bridge now or should I find another route first? The answer is usually to repair the bridges whenever you find them because holy balls there are a boat-load of bridges to repair. Then there's making sure you've got fuel to get there and making sure you've got support vehicles placed at intervals to make things easier. For the most part SnowRunner is a deeply immersive and challenging, but not soul-sucking experience that gives a great sense of accomplishment once you're able to start fulfilling high value contracts. Whether it's hauling huge oil refinery equipment or pulling a giant sequoia log out of a ravine for a lumber mill or simply taking a scout vehicle to an observation tower in order to reveal part of the map, there's always a good balance of thought and activity. Seasons one through three provided this in spades. Less of this balance is seen in season four and I find that to be a bit of a shame. 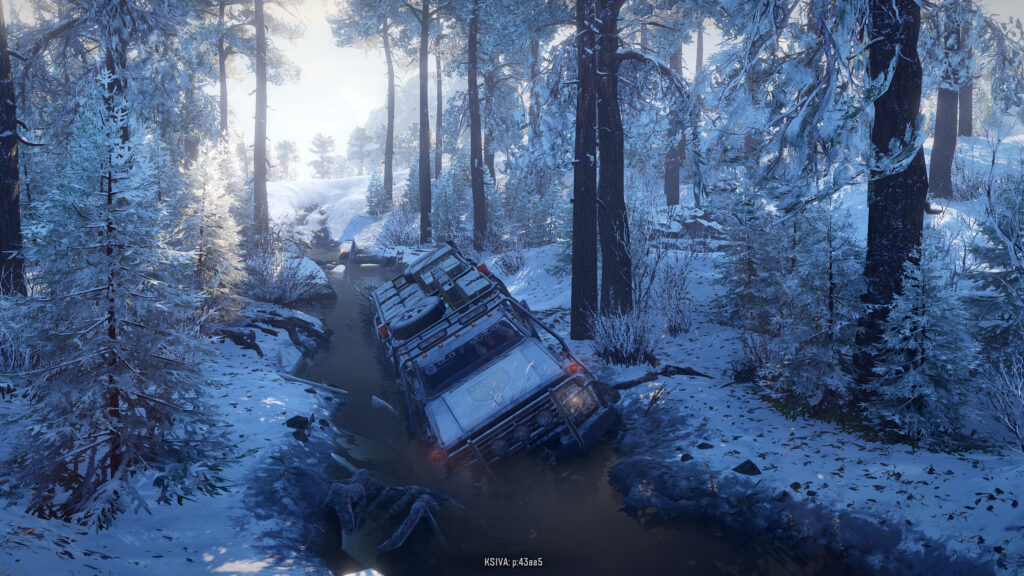 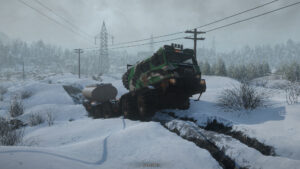 The various parts of Michigan, Alaska, Canada and Russia that you're able to explore are all beautifully designed and filled will tasks and challenges that will test your abilities and reward you with additional funding and vehicles for your efforts. Fix bridges to cross gaps, deliver fuel to stations to be able to utilize them, bring steel to fallen power lines so that can be rebuilt perhaps clearing your way forward, pull vehicles out of water, haul materials from quarries, deliver drilling equipment, concrete slabs, bricks, trailers, etc etc the list goes on and on. Once an obstacle is cleared, let's say a rock slide, then the road opens up and you can avoid the hard way around and maybe that saves you twenty minutes drive time and, critically, tens of liters of fuel. It's a good risk/reward system to help ease your journey through your efforts. This is what SnowRunner is in its persistent badgering of the player to get the job done. And it's great. Once you get to Amur Oblast though, things change a bit. 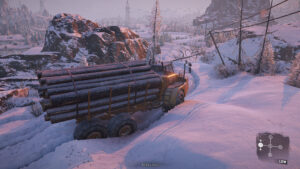 It's not that Amur isn't cool to play through. The challenges are many, the maps are beautiful, but the rewards are less helpful. All the same things exist but instead of easing your way forward you're usually just met with another obstacle. Sure, repairing a bridge will lessen the distance you'll need to travel, but now there's a fallen tree in the road and that obstacle cannot be removed. It must be navigated. Sure, you cleared a rock slide and a road did open, but that road has a steep lateral slope covered in ice so dangerous it might be best to just try and avoid it all together. Amur is filled with traps: thin ice to fall through, winch points that are always just out of reach, deep snow that slows nearly any vehicle to a crawl thus wasting fuel in the middle of nowhere, one way crossings, immovable fallen trees, even bridges that for some reason can't be repaired that would in fact ease the trip.

You see, the problem is that Amur seems purpose built to make the area a slog. And we're not talking the type that is presented everywhere else where you can make things better and save time and energy and open up legitimate improvements to help you progress the map. These maps seem to be designed to waste time and greatly increase risk - and that's not very much fun.

Every other region you're introduced to makes pretty good use of your your whole fleet. Early on you need everything at your disposal to carry on and it's excellent when you find a new truck to use because, wow that's really going to get the job done. In Amur you're pretty much reliant on only your biggest vehicles to do the work because they're the only ones that don't get hung up on roots or stuck in five feet of unavoidable mud or high centered on a boulder. Paved roads do exist, but they're frozen over almost everywhere making the route almost impassible for the heaviest vehicles as they can't use chained tires. What it comes down to is - How much struggle do you want? A medium truck with chains and that will be fine on the paved sections and do a relatively fine job elsewhere but perform very slowly in the mud and snow no matter how well equipped? Or the super heavies with a lower power-to-weight ratio that will plow through the snow and mud without much effort, but greatly struggle on paved sections while some paths may be too small to even attempt? The best you can hope to do is transfer loads from one to the other. It is a real solution, but it will chew away at time and slow your progress more than just taking longer routes in most cases. At least that's been my experience. 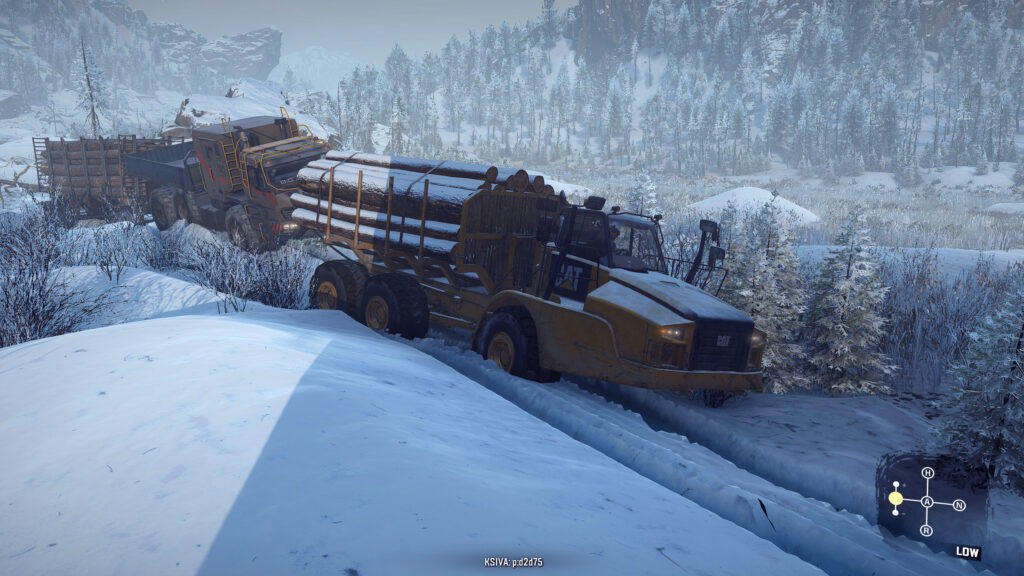 I sound like I'm complaining a lot. To be fair I guess I am. Certainly though, I'm still enjoying the game even here in Amur. I just don't think I'm as much a fan of the season 4 DLC as the others simply because the maps do feel like they're set against the player for no good reason. I love the problem solving aspect of SnowRunner in general. I do not lot love solving a problem only to just be met by another problem that in turn cannot be solved. It's not a particularly good feel. That said though, I do look forward to building a rocket launch site as things wrap up here. I also look forward to getting into season five as I've heard almost exclusively good things. So, if you're in the same boat as I am at any point in the game, here's to perseverance and plodding along to make it work even in the toughest conditions.

If you have yet to play SnowRunner and you're into these kinds of job simulator style games, you really should pick it up. It's available for PC on Steam and Epic Games Store and on the current gen Playstation and Xbox consoles. It's not expensive and there is so much content you may never put it down for very long. I highly recommend it. 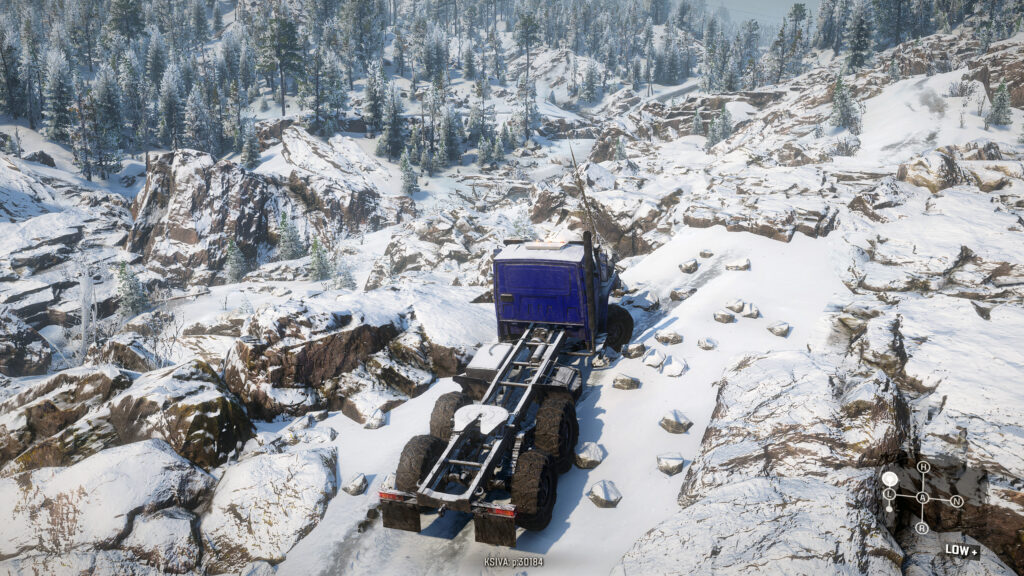