I've been wanting The Surge since I saw it show up on my Steam recommendation page like a month ago. I had no real idea what it was at the time but what I saw looked pretty intriguing. Folks compared it to Dark Souls in blurbs I was reading here and there but I took that with a grain of salt because any game that's not a typical hand-holding cake walk on a So-Cal beach is compared to Dark Souls these days. Soon though, the more I payed attention to it I started seeing the real similarities: unforgiving combat, third person action, seemingly overwhelming odds and the ability to learn from mistakes. So I decided it was just a matter of time before I nabbed it up for myself.

Fast forward to the start of the Steam Summer Sale and I saw a nice looking 25% off on The Surge. I pulled the trigger and to my surprise it's a relatively small download at around five and a half gigabytes and uncompressed it's just over twelve gigs. The system requirements are not exactly low so I was worried about how nice it would look at play on my PC. Another pleasant surprise there because Deck13 have optimized the ever-loving crap out of this title and the automatic video options were given the highest preset. Not only that but the game runs incredibly well at those high specs. 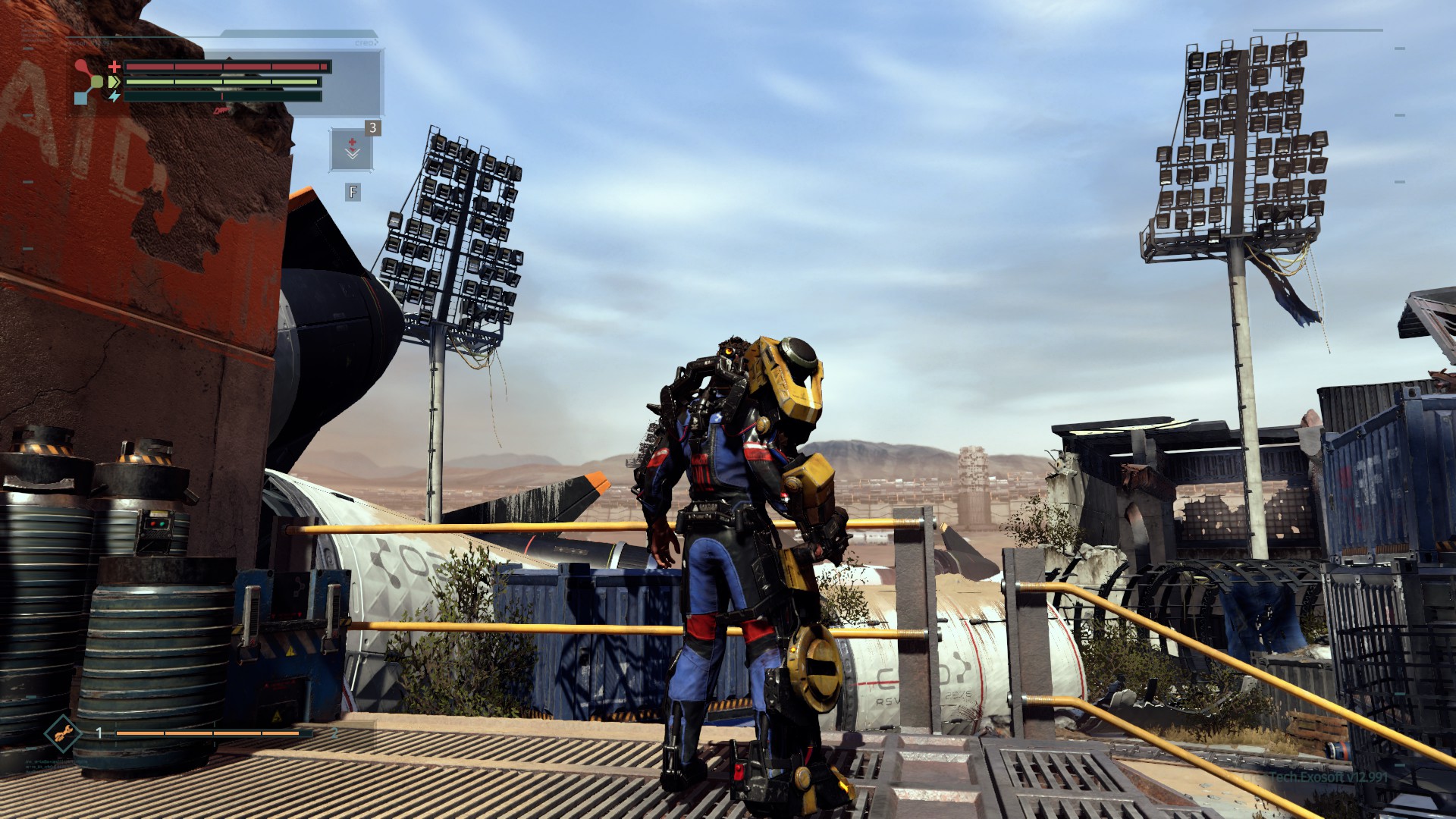 I normally put this stuff off until the end of an article, but for the sake of knowledge I'm changing that format

System requirements for The Surge

My system specs for comparison

So I'm on the outside edge of performance according to the system requirements but this game runs like a gazelle made of wild horses. Props to you, Deck13 for your superb compression and optimization.

The intro is nice set up for what's to come. A corporate propaganda film tells us about how wonderful changes are being made and every step taken is one toward saving the world. The corporation in question is called, CREO* and you as the player are signing up to work. Things of course are not exactly what they seem and our main character, Warren, is thrust into battle against malfunctioning semi-intelligent machinery. The tutorial helps players figure out the controls in a quick fashion and then The Surge turns us loose and flips us off with both hands... And it's great. 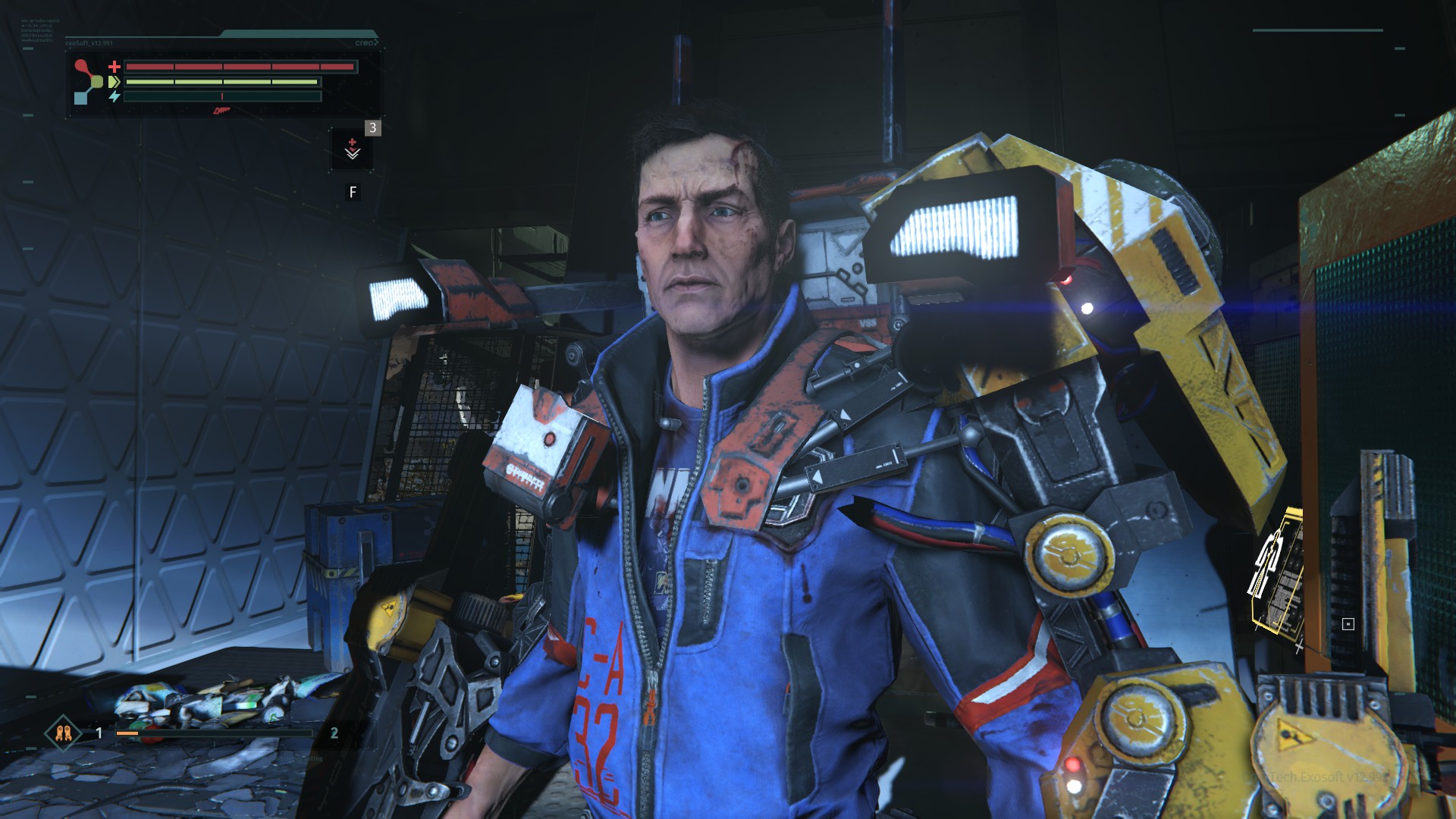 The environment presented is a gritty, disheveled rocket assembly yard and it's full of indications that Warren is not the first to fall into this situation. Enemies are fairly simple to learn but challenging none-the-less. Pick your targets carefully and be methodical about your attacks and defense. Once defeated, enemies will drop upgrade materials in the form of Scrap. Should Warren be defeated, he drops his scrap on the ground where he fell to be picked up by heading back to that spot before falling in battle again. Leveling and upgrades happen at an "Ops Station" where Warren can spend scrap to increase his power core, build items etc. Those same stations also act as a medical bay where the Warren is healed and will re-spawn enemies when used. Sound familiar? I love it. 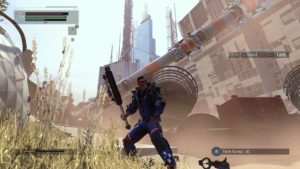 The Surge begins to innovate by being able to target specific areas of an enemy in order to salvage gear that Warren can use. See a corrupted worker with a jackhammer on his arm? Target it and Warren will attack that arm increasing a chance that he'll be able to sever it and claim it as his own for later, making for a fun and challenging loot system. This is the same for both weapons and armor. Materials and schematics will be found on the ground and through combat that will allow Warren to craft new gear for his exosuit in order to make himself stronger.

Combat is intuitive and smooth. Different combinations of movement and attacks will result in various stabs and slashes and swings. These seem to differ with the many types of weapons available. Dodging is a simple action to use and that's good because you'll have to dodge -- a lot. I use a mouse and keyboard here and it's working great thus far. Both left and right clicks will attack. Left for horizontal swings and Right for Vertical. Holding buttons will charge an attack on either side and deliver a heavier blow. Blocking is done with 'Q'. As Warren attacks his foes he'll gain energy and with enough he can perform finishing moves. Strategic combat here is fun to learn and totally necessary in order to progress. I'll probably go ahead try playing with an XBox One controller before I write any further articles on this game. 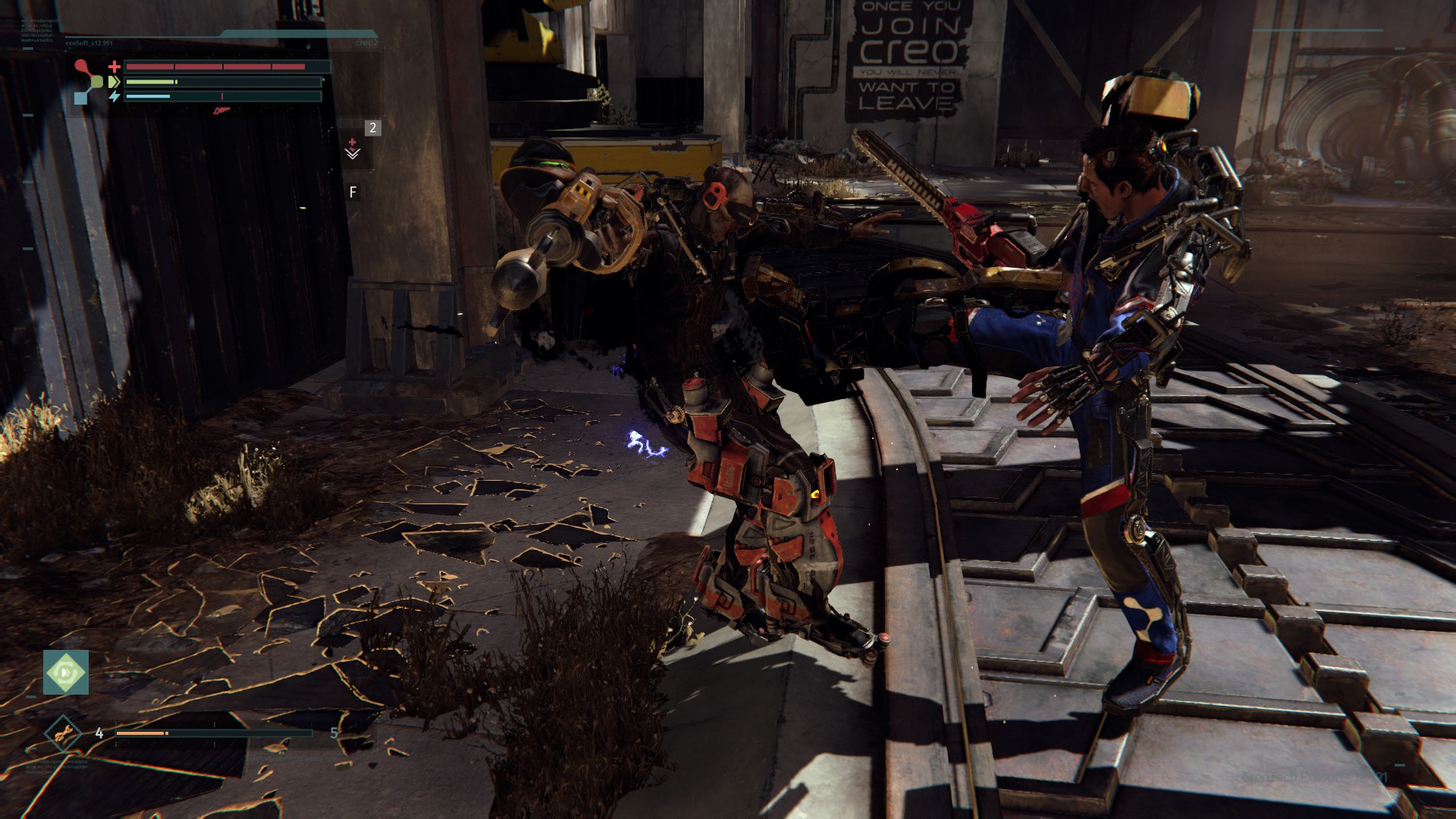 So far the only complaint I have is that the camera can be a little wonky when you're locked on to an enemy. There's no zooming in and out so it's easy to get hung up on objects that may be in the combat area. It also means that it's pretty easy to back-pedal into another fight without knowing it. That's something that doesn't quite seem right since both the player and presumably Warren as a character would have enough situational awareness to avoid that kind of thing. I actually feel like this needs to be addressed because later on in the game when the harder baddies are around I get the idea it could be pretty frustrating being defeated because Warren got stuck on the corner of a box while dodging. Luckily small tweaks and fixes are coming as people are giving feedback, so maybe we players will find issues like that becoming more manageable or fading out all together. Here's a link to the update history on the Steam page if you're interested in seeing for yourself.

I made a first impression video when I first fired this one up and I'll link it below. I also plan on making a game play video or two as I go along and begin learning more about how the game works.

In the meantime I plan on playing much more and learning the ways of the CREO exosuit along with what looks to be a pretty engaging plot line and hopefully I'll write a full blown review later down the road. So far The Surge is looking like a great purchase.

*CREO seems to be just a name for the corporation and doesn't appear to be an anagram for anything. At least not that I can find.