I've been wanting The Surge since I saw it show up on my Steam recommendation page like a month ago. I had no real idea what it was at the time but what I saw looked pretty intriguing. END_OF_DOCUMENT_TOKEN_TO_BE_REPLACED

So, just about a year ago now, I wrote a completely scathing review of the tumultuous mess that Magic Duels was at launch.

Given the online nature of the game and given that it "perpetually renews" itself whenever new cards come out, I figured I would get back in and see a handful of things for myself.  Notably:  whether or not the game was more stable, whether or not the game fared better in my books if I had more cards [and a greater pool of potential deck lists to pull from] and whether or not Stainless had listened to the sheer avalanche of complaints about the game's launch state.

That last question?  That's the question that binds them all. END_OF_DOCUMENT_TOKEN_TO_BE_REPLACED 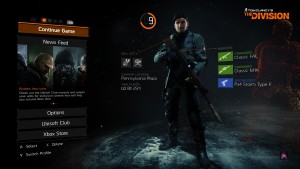 The Division, Ubisoft’s latest open world extravaganza launched yesterday and we are finally sinking our teeth into the gameplay experience. Ubisoft decided to not release the game to the press early with the logic being this is a multi-player experience and without adequately populated servers it would be hard to judge the quality of the final release product. Originally intended as a full-fledged MMO before being scaled back and given the shaky starts to the last few Ubisoft products that involved large scale online components (The Crew and Assassin’s Creed Unity) this was a risky proposition on their part.

For the most part it appears to have paid off, there were two betas leading up to release that were highly populated (Ubisoft provided numbers showing six million users during their open beta). For the most part, so far, the servers have remained stable. I’ve experienced a couple of instances of queues getting onto the server and one crash where I had to drop out of the game and log back in (luckily it returned me to my party which was at the final boss in a mission). Other than that the game has been fairly solid over the course of gameplay starting at 5am and ending at 10pm on launch day.

The gameplay itself is nothing new, none of the core mechanics changed between the betas and release the only change being the unlocking of crafting and higher level powers as well as access to more quests. The game itself is a mashup of Gears of War cover mechanics, Assassin’s Creed open world play with toned down parkour and Destiny loot cycles. Nothing is new in this game but that’s not entirely a bad thing, the gaming community is often caught up in the cycle of reinventing the wheel. Ubisoft have iterated on their own already-refined technology, applying it to a larger palette.

While the Snowdrop engine has been shown to be capable of some beautiful graphics, the level of detail has been dialed back. However, the Xbox One version is still getting some of the best visuals in a game to date. This is made obvious during the very first moments of gameplay.

After a brief cinematic you are shown your character’s face reflected in a car window, you have a handful of customization options available (not nearly as many as traditional MMO gamers would appreciate or even offered by the closest cousin of this game Destiny) you still get an opportunity to make your character feel your own and it’s done in a way that is unique compared to the generic “generate your character” screens found in many other games. Once past this introduction you play out a handful of scenarios in possibly one of the most elegant tutorials I’ve seen in years. Playing in a sliver of Brooklyn you get to learn the core mechanics of gunplay, map traversal and interface management before being dropped into the hell on earth that is post Dollar Flu Midtown Manhattan.

The gentle start in a controlled environment allows for familiarization with the core concepts of how things work in The Division. As I mentioned earlier, the game is a third person cover shooter similar to Gears of War. In fact the entire mechanic may have been ripped out of one of the Gears titles with even some of the triggers for movement aping those titles. You have two traversal buttons with A attaching yourself to cover and B using a navigation button. Tap A to attach to whatever cover you are next to or point your character at a spot of cover and hold A to sprint and slip into cover. B lets you leap and vault over and around cover keeping your character moving. Shooting is likewise similar to the Gears series with certain scope attachments allowing you to slip into first person zoomed shots. You have the ability to combine three weapons with one of the three being a dedicated “sidearm” slot the other two are entirely up to you based on your style of play.

Once you are dropped into Midtown Manhattan you are presented with a near 1:1 representation of the city stretching from just south of Central Park to 14th Street. For 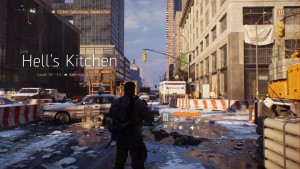 those thinking this is a small area, the 1 to 1 ratio makes this a rather vast playground which includes landmarks like the Empire State Building, Radio City Music Hall, Times Square and the Flatiron Building as well as neighbourhoods like Chelsea and Hell’s Kitchen. Having recently visited the city the attention to detail in capturing some of these landmarks is amazing. While not perfect it’s still very impressive and truly felt like I was visiting the city not just some generic urban centre. What makes this even more impressive is you have access to much of the complicated and maze like New York subway system as well as the ability to access many of the buildings in the city.

Ubisoft have given us a really impressive sandbox to play in but what do you do once you are there? Well there are a series of core story missions that advance your game and move you forward in the plot (a middling techno-drama that you would expect from a Tom Clancy novel) as well as several events that pop up around the city like storming a rioter base, rescuing hostages or hunting down a bounty on a criminal. As you complete these events you earn resources you can use to add improvements to your home base all the while leveling up your character allowing access to more powerful equipment and abilities.

There are a couple of standout features that really make this game engaging, the first is the seamless match making. The various missions or quests that you have scattered around the city are best tackled in a group. Having a handful of team mates really allows for some fun tactical thinking and it’s always nice to have somebody there to revive you should you be gunned down. You can very easily search for a team or join an existing team right from the map and you are teleported to the start area once you join the team. The next compelling twist on the open world multiplayer pastiche is the Dark Zone, this is an area of the city which was so badly hit by the Dollar Flu that it is an Escape From New York style city within a city walled off and with no rules. This area holds the hardest missions and the greatest rewards but it’s also open season where not just the environment but also the players may be out to get you. I’ve previously experienced this during beta and it was quite the challenge. For the most part players obeyed the Golden Rule but every once in a while a pack of wolves would gun you down. The exciting challenge of this is when they did you would lose XP (Dark Zone XP is tracked separately from that of the main game) and the Rogue Agents (as they are called in game) would be able to steal your loot. The only way to get your loot out of this heavily infected area is via pick up locations scattered through the Zone which is basically announcing to everyone around you AI foe and Rogue Agent alike that you are there ripe and ready for the plucking.

This led to some great emergent gameplay during the beta where I would help other players fend off AI opponents as well as the occasional rogue agent. The only real down side being in a hot firefight if you are not good at checking your targets you may accidentally be marked as Rogue. When you do go Rogue a bounty is posted on your head (increased based on your kills) and it’s open season for all non-Rogue agents to hunt you down and kill you. There’s not a lot more satisfying than catching the guy who shot you earlier and getting a little well-earned vengeance.

This is where Bungie really need to take note, this game most closely resembles a third person cover based version of Destiny. Destiny’s largest problem has been party match making, missing from many of the missions and the jarring load screens where you sit in space waiting for your team to all load into the map. This kind of break in gameplay doesn’t exist in The Division and matchmaking never took more than a handful of seconds during these early days. Additionally the entire conceit of PvP (aside from the Sparrow Racing or the House of Wolves event) in Destiny always felt jarring and out of place for the in universe fiction that they set up, for the most part the PvP just seems separated from the gameplay proper with little reason to exist outside of padding. The Dark Zone region of The Division gives players an actual compelling reason to put themselves at risk and also a real tangible reward for “going Rogue”. 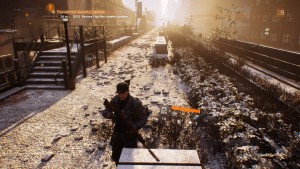 Where the game is failing in these early hours is the one area that they are least able to tweak at this point which is the setting and the story. While the setting of a vibrant and varied city like New York with its near photorealistic representation is visually stunning it also makes for a very grounded in reality game. This means your character model can mix it up with some cool urban threads but at the end of the day he or she is wearing a hat, a scarf, a jacket, a shirt some pants, boots, gloves and a backpack. Hardly the Space Armour of Destiny with its Future filigree and glowy bits. The same applies to your guns, so far aside from a DLC sawed off shotgun that you can use as a sidearm everything seems sort of "generic gun". Yes you can customize and modify the guns with attachments which are reflected in game as well as apply different paint schemes to them but in the end they all blend together without any of the character you find in other games like Destiny or even the Call of Duty games with their over the top character customization and “future weapons” found in the last two entries.

This early into the game, it’s hard to judge how well The Division will fare, but it’s certainly a fun ride so far. If you enjoy post-apocalyptic scenarios like The Road or Escape from New York this may be the game for you.