If you logged in today, January 8th, you likely saw the reminder that the revolutionary and definitely supported for years to come, Google Stadia is shutting down on the 18th of the month. END_OF_DOCUMENT_TOKEN_TO_BE_REPLACED

I may have a problem. I have nearly twenty five full days of play time in SnowRunner. It's a title I had looked forward to ever since MudRunner and I bought it happily when it came out on EPIC originally for my PC. To be clear, I even pre-purchased the game and that's not something we here ever recommend, but I knew I'd love it. I played the game and made it to Amur in phase four when it came out before becoming somewhat disenchanted by what felt like a pretty huge and unbalanced difficulty increase so I put SnowRunner down for a while. Before that, however, way back when season two started I began finding myself getting curious about how much these materials I was hauling and towing around weighed, so I began making an itemized list with estimations based on my own construction and landscaping background and I came up with some numbers. I've been playing again recently and I'm now two phases behind, but I did run across the list I made and it sparked an interest in sharing it with all of you. END_OF_DOCUMENT_TOKEN_TO_BE_REPLACED

I've been playing SnowRunner for nearly six hundred hours and I'm only into season four of the game. Let that sink in a minute. Five hundred and eighty-ish hours of driving around in the mud, snow, through and over ice covered lakes and rivers at around eight miles an hour. It sounds boring AF but man I love this game. END_OF_DOCUMENT_TOKEN_TO_BE_REPLACED

END_OF_DOCUMENT_TOKEN_TO_BE_REPLACED

Hey everybody it's me, Scrooloose and the rest of us here at Twinstiq. How's it going? Good? You want a soda? No? Would you settle for a slap-dash list of games we liked from last year (and some prior) written in no particular order, some ranked and some not, hastily put together and edited in collaboration over the last few days with no real format? Yeah, we thought you'd like that. END_OF_DOCUMENT_TOKEN_TO_BE_REPLACED

While you read this, try to remember that you are a consumer of goods and not a member of a blue or green team okay? Giant corporations like Microsoft and Sony are not your friends, and they market themselves to make you feel defensive when people like me criticize what they do.   Don’t. They do not care about you, just your money. And I’m here to explain with one, and just one, simple reason why all Modern Consoles are absolute trash compared to PCs. And even compared to mobile phones... END_OF_DOCUMENT_TOKEN_TO_BE_REPLACED

END_OF_DOCUMENT_TOKEN_TO_BE_REPLACED

Did you guys ever play Rollcage? It's an action racing game that came out in 1999 for Windows and Playstation. Players took on the role of extreme race drivers who piloted purpose built vehicles that could operate at extraordinary speeds, driving on walls and ceilings because of the powerful downforce they generated. They could even tumble over and remain driveable because of their oversized wheels. Not to mention there are weapons involved to make things interesting. Think about something along the lines of Mario Kart, but at closer to the speed of sound while almost every surface on a track could be utilized. And instead of shells and bananas, there are homing missiles and mines. END_OF_DOCUMENT_TOKEN_TO_BE_REPLACED

Well yeah technically that's true. The PlayStation 4 itself can play any title from any region. But good luck if you change regions and make a new account, or in my case, buy DLC in your current region for a physical copy of a title that happens to be from another. You're rolling the dice.

I'm a PC guy, have been since the 90's. Sure I owned a PS2 and when it died I bought a slim one in like 2005 I think it was, in order to replace it. Aside from that though I haven't owned or really even wanted to own a current gen console. I have nothing against them mind you, they're more affordable and generally stable while having a large library of games and apps to use nowadays. Except for shooters. Ugh, controller shooting vs. mouse and keyboard... there's just no contest.

Anyway, for Christmas I was gifted a PS4 slim with a few games that have interested me but I couldn't play since they aren't on PC. One of those is the super impressive Horizon Zero Dawn. I'm way into this game: Beautiful world, good writing and a pretty decent story. This new PS4 impresses me actually. Boot times are fairly quick and it's pretty easy to use even for a PC guy like myself who is unfamiliar with the OS layout.

So a few days back I received a ten dollar gift credit from PlayStation to use by the end of this month. "Cool", I thought. "I should buy the Frozen Wilds DLC for Horizon". And I did.  The download happened over night and the next day I went for the install. I was all excited about making my first purchase on the PlayStation Store and seeing how it all works for what really was the first time. But instead of installing I get a message: (paraphrasing) "Game content not found. Would you like to open the PlayStation store?"

Now I'm confused. Why wouldn't this work? The purchase was confirmed and the download was successful. So I cancelled the install and started the download again thinking that maybe something just didn't gel. Four hours later I tried the install again and got the same message. Now by this time I'm 35 plus hours into Horizon so I know and PlayStation knows full well that I have the game content installed on the machine. So I boot the ol' PC and hit the interwebs for information.

As it turns out my copy of Horizon Zero Dawn has a European region code. Here's how that works: A code beginning with CUSA followed by five digits, is a Canada USA - North American region code. If that same CUSA code is followed by a second line of seven more digits, making twelve in total, then that code is European. Meaning of course that your copy is an EU version even though it says CUSA on the case.

Now, the PS4 itself is not region locked. If I moved to another country I would be able to bring my PS4 and buy games from that country and play them on my account. The problem is that games and DLC follow a country code. Meaning my USA region games will never, ever be compatible with another country's region DLC. Such is the case for me. No matter what I do I can never use the DLC I bought for the game I own without it costing me more money and needing to start the game over from scratch because of course save games are also not compatible cross region.

Getting Things Worked Out

Of course I decided that I didn't want to just eat the money I spent on a product that I couldn't use so I began trying to contact PlayStation Support in order to straighten this out. First let me say that if you've never had to do this before it's a giant pain the ass to get ahold of them. You'll have to navigate a few screens before you'll be able to contact anyone regarding any issue. Most of what you'll see are Twitter FAQs and search bars but if you dig a little you'll see a topics button that can be expanded thus bringing up an option of refunds that again will have to be expanded opening a screen with yet another link about how to get a refund that will show a couple of options. There is no "contact us" link, no way to email customer support to open a ticket, and only with some scrolling will you find an 800 number to call, (1-800-345-7669) by the way. But I chose to try the live chat with customer support.

I had to provide the proper information including my linked email and account ID etc. Understandable as they need to verify who I am and whatnot. Once I got that done I was placed in line in order to talk to someone and to their credit it only took a few minutes. I was placed in a chat room with a friendly agent called Melissa who promptly refunded my purchase and answered a few questions for me. Below is the transcript of my chat. 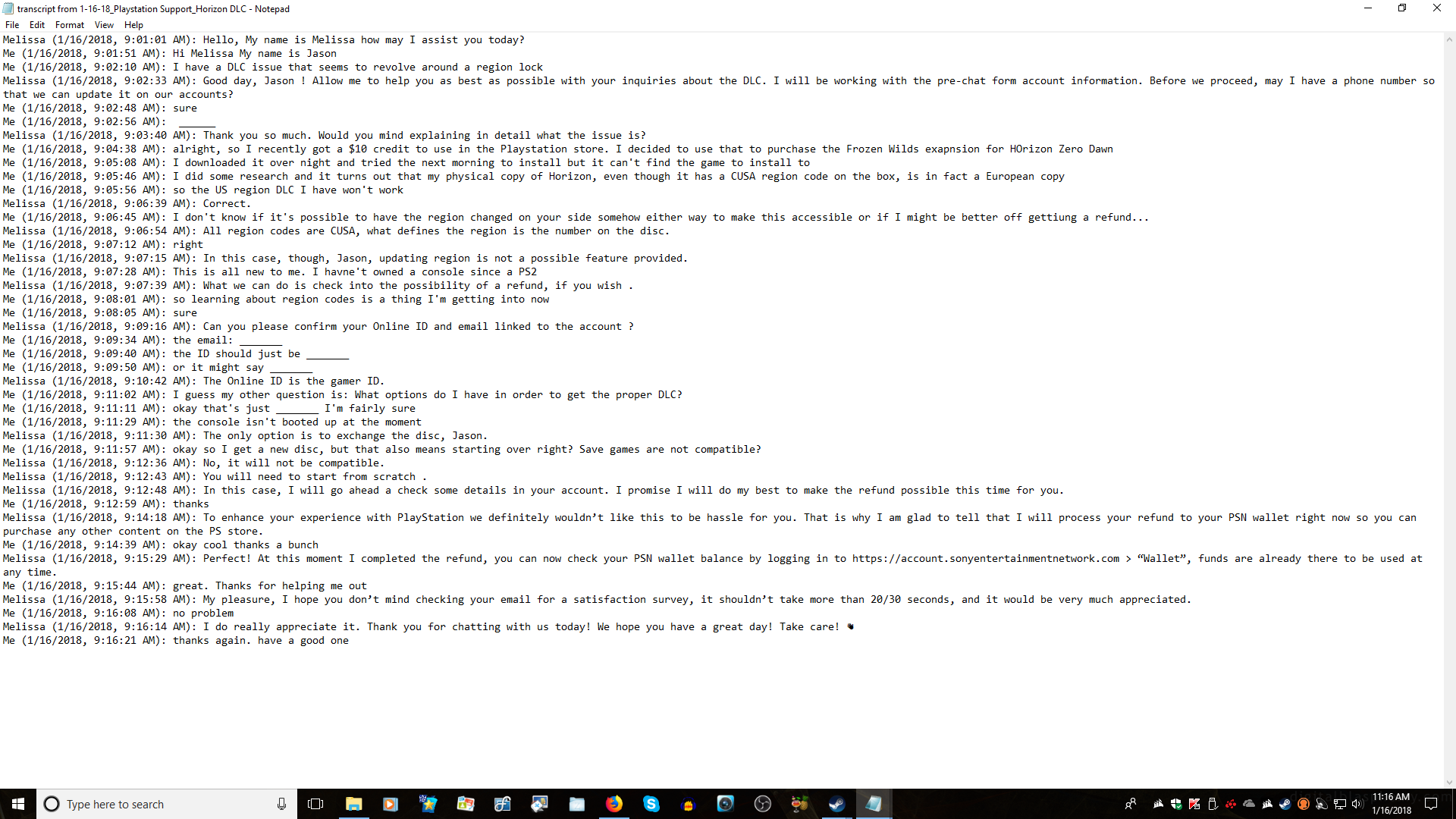 So I did get a quick refund from a perfectly pleasant agent but again, there's no option for me aside from buying a new, US version of the game in order to play the Frozen Wilds DLC. An exchange, as was suggested, is basically out the question as the closest brick and mortar store is about 75 miles from my house and this was a gift anyway so the reciepts are long gone. Not to mention Sony doesn't offer a change of region as a service at all so that's never happening.

I also found out that most games don't ever have this issue. It's usually the game developer and publisher who decide if title should have a region lock. So it's even more strange to me that this game, Horizon Zero Dawn, a PlayStation exclusive title that happens to be published by Sony, would have this problem. I'll say with certainty that from now on any new games I buy will be through the PlayStation store in order to make 100% sure that I'm getting content I can fully use.