Well last year my Four in February turned into a #3iF, so this year I'm taking some measures to ensure I can finish all four of my picks...

END_OF_DOCUMENT_TOKEN_TO_BE_REPLACED

Welcome back to the Twinstiq Game Club where the first rule of Game Club is to always talk about Game Club. I'm Scrooloose and this week we rolled for my nomination and the crew will be playing: Hammerfight.

This is a 2D physics based title set in a fantasy world where the player takes the role of a "rider", an operator of a flying machine who happens to belong to a long line of warriors in a tribe called the Gaiar. Various sects and tribes inhabit the world of floating islands and eventually the player is captured by a rival and forced into slavery. Hammerfight's story is linear and fairly short at only around four hours but there are several modes that will unlock during your play through to increase your play time.

Players will use a flying machine that can mount various melee weapons to use in combat ranging from a simple stone mace on a chain to swords, axes and even whip chains. All controls are made using your mouse, so make sure your DPI is as high as it can be since the faster you sweep your mouse the harder your machine will swing that weapon. 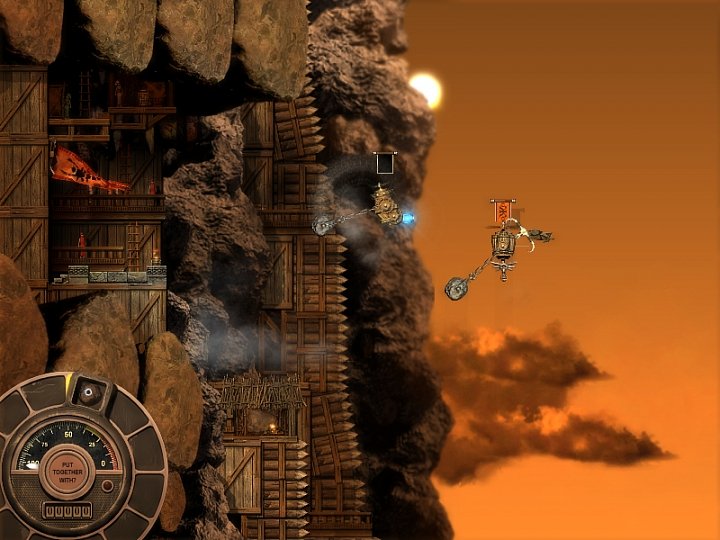 As you play you'll gain currency to allow the purchase of new weapons and armor that can be combined to make a pretty imposing flying machine. You'll will also earn glory which will evolve the look of the craft and gain player titles.

Hammerfight does have multiplayer via multiple mouse support on a single screen. I've never tried it since it honestly sounds pretty inconvenient but it's available.

The story itself is actually pretty nice if a bit predictable and literally translated, but it'll feel complete when all is said and done. As I mentioned above the story mode will take about four hours if everything goes smooth for you. Stages are very short but often times very challenging, expect to die over and over. As you play you'll unlock an Arena mode where you can battle multiple NPCs as long as you like earning money and glory. You'll also unlock the Hall mode. This is where you'll purchase and practice with them, once purchased they're always available in the hall should you wish to try different combinations. There's also a Hammerball mode. A sort of sport where the player uses a hammer to bat a ball back and forth on the screen against NPCs for a score and lots of money.

If You Plan To Join Us

Alright guys that's what we're playing this time around and we hope you'll join us. I'll list some items below explaining our agenda and what to expect.

System Specs For Hammerfight Are As Follows:

History is being made this weekend. The largest prize-pool in E-sports history is currently being competed for by the best moba players in the world.

END_OF_DOCUMENT_TOKEN_TO_BE_REPLACED

Did you catch all that news about the new World of Warcraft expansion? Did it feel to you like twelve year old Metzen was running rings around forty+ year old Metzen saying “YOUR GAME NEEDS MORE COOL THINGS?!” No? That was just me? Oh well. Maybe you’re going to play World of Warcraft this weekend, who knows? But this is what Twinstiq is up to: END_OF_DOCUMENT_TOKEN_TO_BE_REPLACED

In a recent press release, Blizzard Entertainment promised some fairly exciting news about the developers most popular game.

END_OF_DOCUMENT_TOKEN_TO_BE_REPLACED

Another Friday, another WRUP, but there have been some exciting changes for Twinstiq, as I'm sure you can guess just from visiting the site to read this. Dr. S did a fantastic job with the new site, and he continues to work on it to improve and update. Bear with us as we make Twinstiq the site we know it can be, the site it will be. In the meantime, check past the break to see what we're doing this weekend, and make sure to tell us what your plans are in the comments below.

END_OF_DOCUMENT_TOKEN_TO_BE_REPLACED

It is done! Sorta. Kinda.
The new site is here and it's somewhat beautiful. It's also broken as hell at this stage, with much work ahead of me, little new features for the reader, and the feeling that all will break down if you look at it from the wrong angle, but hey, baby steps. Our new content management system has way more potential than our previous one and I'm quite proud for actually getting this far without any previous knowledge on how to do any of this.

The reason it launches in this state? 50 Shades Of Unprofessionalism! And our previous CMS would like money again.

Next step: I'll try to fix as many issues as possible until Gamescom, teach our writers how to actually use our new CMS (yeah, potential disaster in the making), someone else will hopefully find the time to fix at least the most recent posts (pictures/videos are missing, some other stuff too) and you guys leave comments about how much you love us, that you are super proud and that you like the new design.
After Gamescom I'll look into the option to select a different color scheme (some people maybe don't like the dark as much) and you will get a bit of video content from Germany.

That's it from me for today. My brain is pretty much exploding at this point and I need to get drunk fast.