By now we're probably all familiar with the up-coming DC film "Suicide Squad". Based on Detective Comics graphic novels of the same name, the Suicide Squad is comprised of a band of degenerate weirdos and misfit villains that are drafted into service as anti hero types meant to take on impossible tasks that they are not likely to survive. 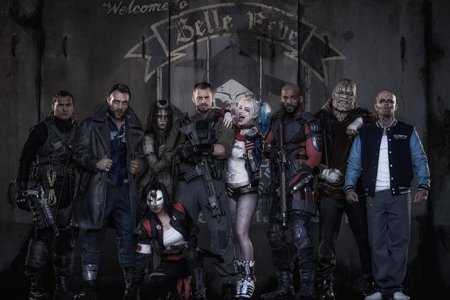 I'm pretty excited for the movie myself, especially after the last trailer I saw. We'll be expecting to see this in theaters August 5th of this year.

This article however, is about the true and real Suicide Squad comprised of some equally degenerate weirdos and just so happened to form the basis for what is now NASA's, Jet Propulsion Laboratory (JPL).

In the interest of time I'm going to summarize some things until we get to the interesting bits after this paragraph. A talented self taught chemist at Caltech named John Whiteside Parsons (folks called him Jack) along with colleagues, Frank Malina and Edward Forman wanted to make a liquid fuel rocket motor. However they lacked the funding so they decided to approach Caltech with the idea. The head of GALCIT (Guggenheim Aeronautical Laboratory-Caltech), Theodore von Karman gave permission for the group to work together on the subject.

With some effort the men came up with the basic funding needed and secured a test site behind the Devil's Gate Dam in Pasadena CA. As it happens this site is pretty close to the JPL test site still used today. Soon the team was re-enforced by two more scientists from GALCIT: Weld Arnold and Hsue Shen Tsien. The Suicide Squad was now complete. 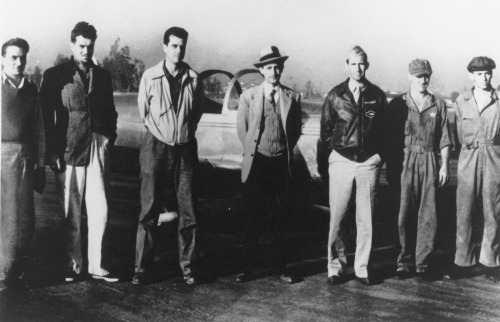 Why the name Suicide Squad? Well, as it turns out a lot of the small scale tests were done indoors and one of these tests went awry in 1937 that caused a cloud of nitrogen dioxide/alcohol to be released forming a thin rust layer on much of the team's lab equipment. This of course could have also been very unhealthy for the team members themselves, and afterward all tests were performed outside. Crazy huh?

Word got to the team in '38 of the National Academy of Science (NAS) interest in seeking a way to assist in the take off of heavily loaded planes and Caltech was awarded a $10,000 contract. The Suicide Squad got to work on development of rocket propulsion that would provide a large increase in performance for propeller aircraft to get up to speed quicker and thus take off quicker. The team referred to it as jet propulsion so as not to sound like a pulp sci-fi story that would never be taken seriously.

Theodor von Karman was set as the lead with Parsons, Forman and Malina being the major staff members. Arnold and Tsien had left the project several months earlier. Parsons quickly proved himself invaluable to the operation in 1940 by using knowledge from the failed experiment in 1937 to show that red-fuming nitric acid was better than liquid oxygen to be used as an oxidizer.

Now things start to get weird:

Jack Parsons had a second life, a very strange one in fact. In Los Angeles in 1939 he and his wife Helen had found an organization called the Ordo Templi Orientis international magical fraternity, or O.T.O. The order was lead and founded by a British man named Wilfred Talbot Smith who quickly formed a friendship with Parsons' wife. They formed the O.T.O. Gnostic Mass Temple in the attic of their house. This temple contained a book, the Egyptian 'Stele of Revealing' which was known widely by the followers of a famous magician by the name of Aleister Crowley. He was known for the mantra "Do what thou wilt shall be whole of the law". Information on Crowley can be found here.

Crowley eventually wrote an astrological research paper titled "Is Smith a god?" that convinced Wilfed Talbot Smith that he wasn't a human, but actually an incarnation of a deity. This event lead to Smith going into private practice, and that somehow brought Parsons up to be the new Head of the O.T.O. Lodge. Parsons' wife Helen eventually left him for Smith, but they managed to stay friends. Besides, Parsons was busy collecting money for the upkeep of the O.T.O. much of that coming from his own pockets.

Crowley was an accomplished fellow, a writer, mountain climber, and chess master, but his main focus was the practice of sexual magic "Magick" as he called it. Soon he was known as "the wickedest man in the world" and even compared to the "Great Beast 666". He of course felt that this was a misconstrued reference and countered with a quote "Within the memory of man we have had the Pagan period, the worship of Nature, of Isis, of the Mother, of the Past; the Christian period, the worship of Man, of Osiris, of the Present. The first period is simple, quiet, easy, and pleasant; the material ignores the spiritual; the second is of suffering and death: the spiritual strives to ignore the material.... The new Aeon is the worship of the spiritual made one with the material, of Horus, of the Child, of the Future." His books are still stocked in new age book stores.

Parsons would regularly perform prayers to the O.T.O. before testing new rockets and began to believe that it had a major effect of the Suicide Squad's success. Unfortunately he wasn't very successful very quickly and the many failures began to raise questions by the government financiers. Eventually however he was allowed to continue and the Suicide Squad built the first successful "Jet Assisted Take Off" (JATO) rockets just a few months later. And on August 12th 1941 [a date that coincides with new Suicide Squad movie release almost to the day] Parsons' team was involved in the very first American jet assisted takeoff. Magic or science? (For the record I say science coupled with a lot of trial and error) 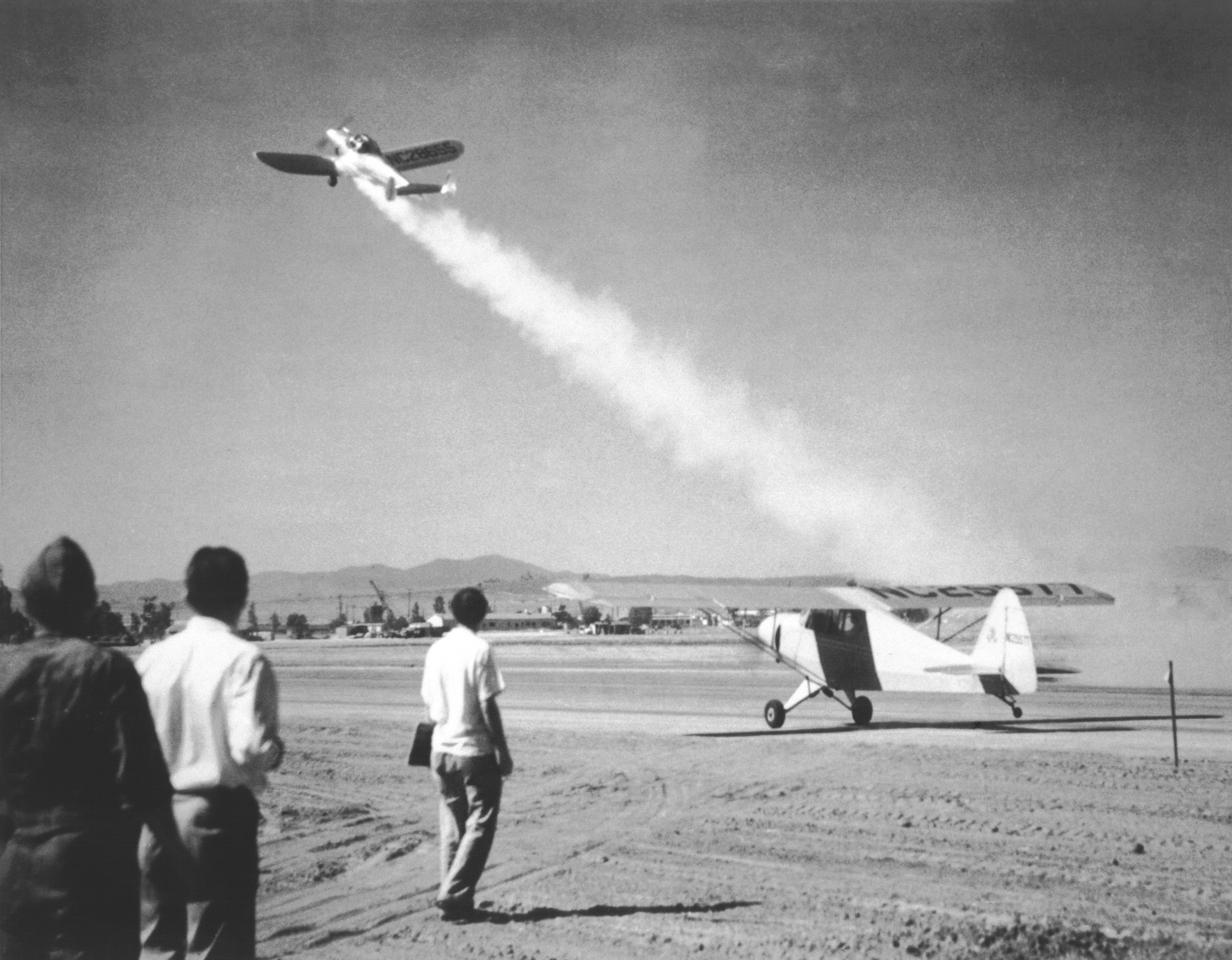 The new JATO rocket utilized a fuel called GALCIT-27, it provided 28 pounds of thrust for 12 seconds. There were still problems however. This was a solid rocket fuel in powder form and during storage could settle and crack causing abnormalities that would produce inconsistent burns and even catastrophic failures. This was solved initially by only loading the rockets just prior to use, but they needed a more permanent solution.

So Parsons and two others credited for their help in development, Fred Miller, and Mark Mills, created a more stable version of the fuel called GALCIT-53 in June of '42. Around the same time others were working on Parsons liquid fuel idea from much earlier using red-fuming nitric acid and gasoline, this also turned out to be successful. Soon Parsons, Malina and Forman had their own company called, Aerojet Engineering Corporation, to produce and sell these rockets. Later this company came to be known as the Jet Propulsion Laboratory.

...Malina came under scrutiny for being an ex-Nazi (actually a few years earlier) and had moved to Paris, France where he joined UNESCO. Eventually in 1952 he returned to U.S. and with his shares of Aerojet managed a comfortable life. He became a sculptor and artist, even founded a magazine called Leonardo, it's still in publication today.

Also in 1952, Parsons was working on an experiment in his garage mixing "magick" and science. Supposedly he was trying to create a Homunculous, a magical artificial human. The experiment went wrong and he was killed in the resulting explosion.

I could find little information about Edward Forman, other than to say he left the team. Perhaps more research at a later time will yield more.