I'll admit up front that I used to be a bit of a Blizzard fan boy. All the way back with The Lost Vikings, Warcraft, Warcraft 2, Starcraft and so on this is a game company that constantly kept me and my friends entertained. At the very tail end of 1996, then Blizzard North, introduced Diablo, and it very quickly became an obsession. Diablo was a game changer, a true original. The first of it's kind hack-n-slash dungeon crawler that 'spawned' (see what I did there?), an entire genre. END_OF_DOCUMENT_TOKEN_TO_BE_REPLACED

I'm into ARPG's. From the isometrics like Diablo of the 90's, to the much more modern Path of Exile and the third person Darksiders from the 2000's, they've all entertained me and kept me in the hunt for newer and better gear just as they're designed to do. Grim Dawn is one such ARPG and I'm going to go into some manner of detail and hopefully give those of you who don't know about this title a reason to check it out. END_OF_DOCUMENT_TOKEN_TO_BE_REPLACED

Alright well we've all seen free to play ARPG's out there and most of them are too good to be true. They allow you play to a certain level then charge you money to continue playing, or they lock specific gear you need to continue behind a pay wall or some such nonsense that makes an otherwise fun, free game, much less free or fun.

But some get it right. Path of Exile, for instance created and published by Grinding Gear Games, is a great fantasy ARPG. Nothing locked behind pay walls, and donations are made for cosmetic items only if you so choose. All content is free and fully accessible and the support is excellent. It remains one of the best examples of how the free to play model can really work. But let's say you're sick of the typical dungeon crawler, D&D fantasy style isometric Diablo clone ARPG.

Enter, Marvel Heroes. It pretty much speaks for itself but here's the rundown. You'll be a super hero or villain from the Marvel Universe and follow a very graphic novel style story that takes you around the world to see places like New York and the Savage Lands while giving you home bases like Avengers Tower and Xavier's School for Gifted Youngsters. The story is told through missions as you play of course, but also with some very cool comic book style cut scenes. 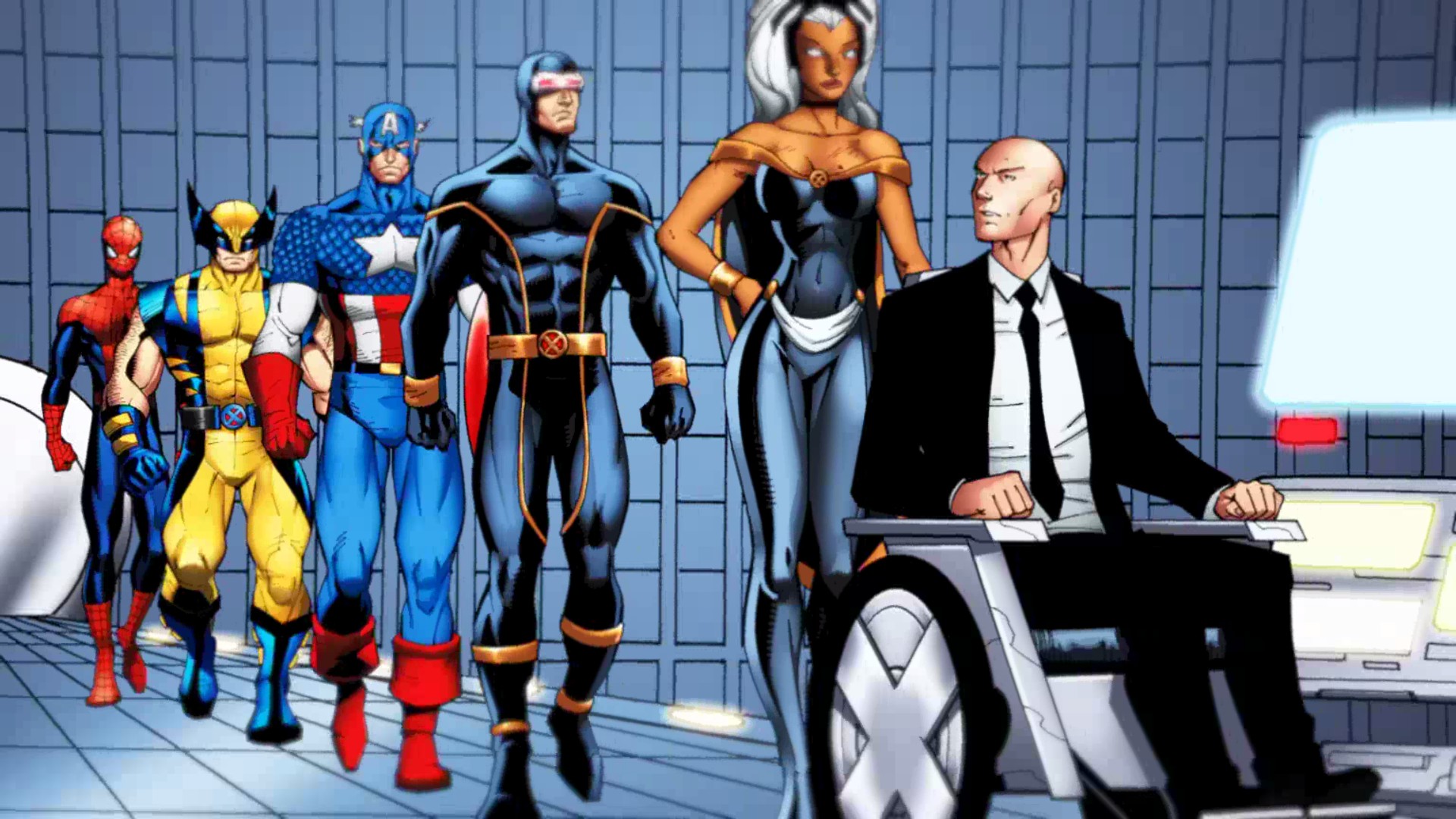 I've been playing this pretty consistently for a while now and I'm noticing that this another good example of a player friendly free to play model. So let's look at this game a bit and see why it's such a good experience. It's 100% free. You can grab Marvel Heroes on Steam if you have an account, or you can download it right from the source at the official site and soon enough you'll be confronted with a choice of what hero or villain you want to become. When you first start you'll have access to 12 heroes and after the prologue that number increases to 55 and more are still being added. Here's the current list of playable characters.

You'll be able to play every hero or villain until level 10 and then the game reminds you to remember to switch out heroes or choose to "uncap" the current one. They give you one hero for free to level all the way to 60 but want you to play as many as you can so that you can make an educated choice. I tried: War Machine, Luke Cage, Iron Fist, X-23, Juggernaut, The Thing, and Cable, to name a few (there were more) before finally deciding to continue on with Captain Marvel. The rest of the heroes and villains remain playable at any time you wish from just about anywhere in the game. So if you feel like you need a quick change just press "T" and choose a new hero; no need to log out and back in to switch. It's a pretty smooth operation. 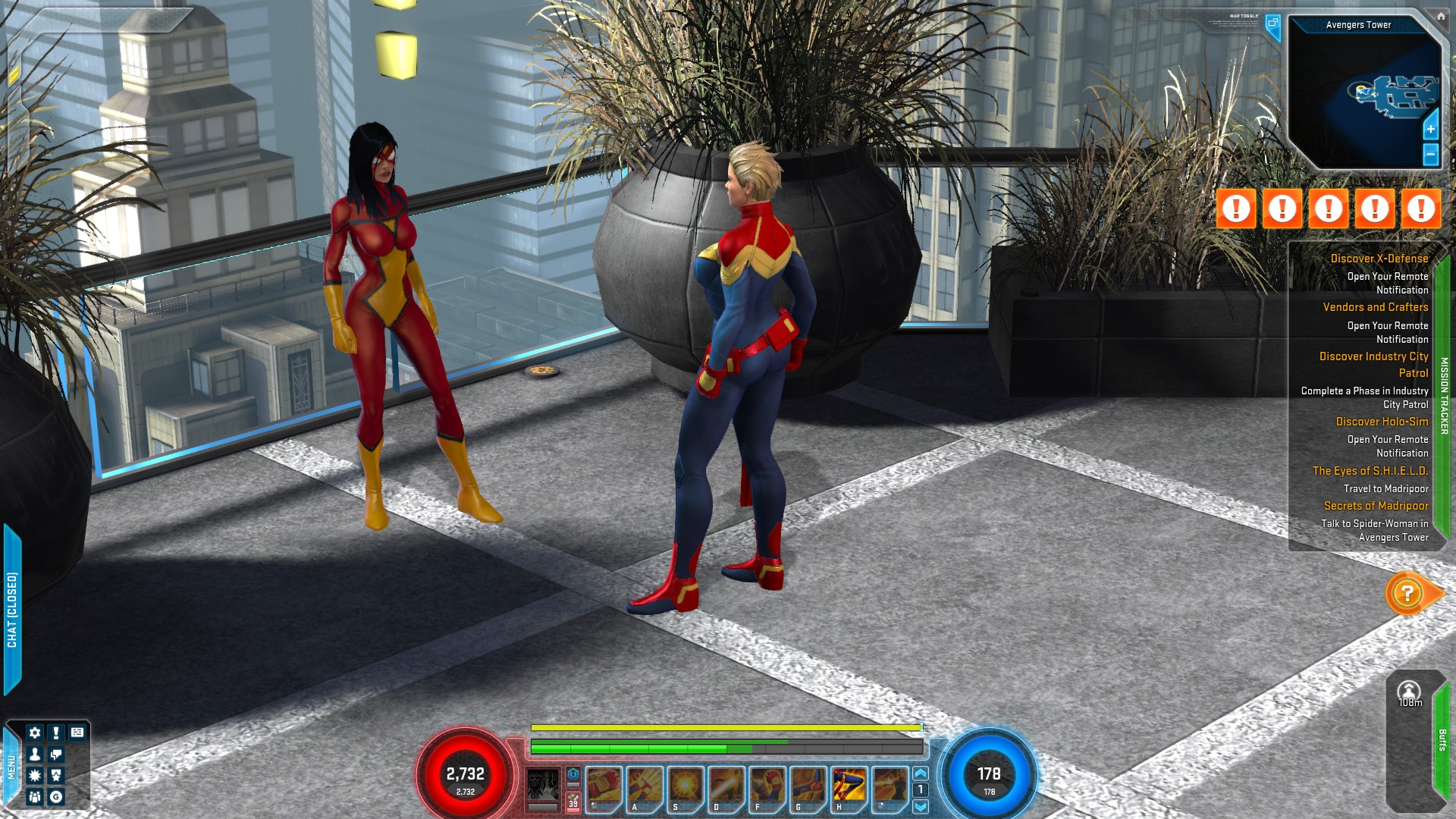 It's important to remember that every playable character is free until level 10. I reiterate that because if you grab this game on Steam you'll see some fairly pricey DLC on the list that includes heroes. Those DLC packs include cosmetic items and alternate costumes which you can purchase separately in-game. They'll also uncap that hero for you but the most useful thing they include is a character specific inventory, which would actually be pretty great because inventory and stash space is shared and storage is kind of limited if you're going to play more than one hero. It's also important to know that if you do decide to uncap more than one hero you can do that via the game store with real money, or if you're patient you can collect "eternity splinters" (items that drop off enemies) and use them to purchase your next uncap. They aren't very rare and the game will even provide you with a pack of 400 of them as a login reward and that alone is enough to buy most heroes, they range from 200 to 600 splinters each. The point here is that you only need to spend actual money if you want to.

I've chosen to purchase an alternate costume for my Captain Marvel because it's not expensive to do so in most cases (some cost more than others) and I figured I'd support the title in at least a small way. And like most free to play games Marvel Heroes has deals and sales on bundles of items and the like pretty often. 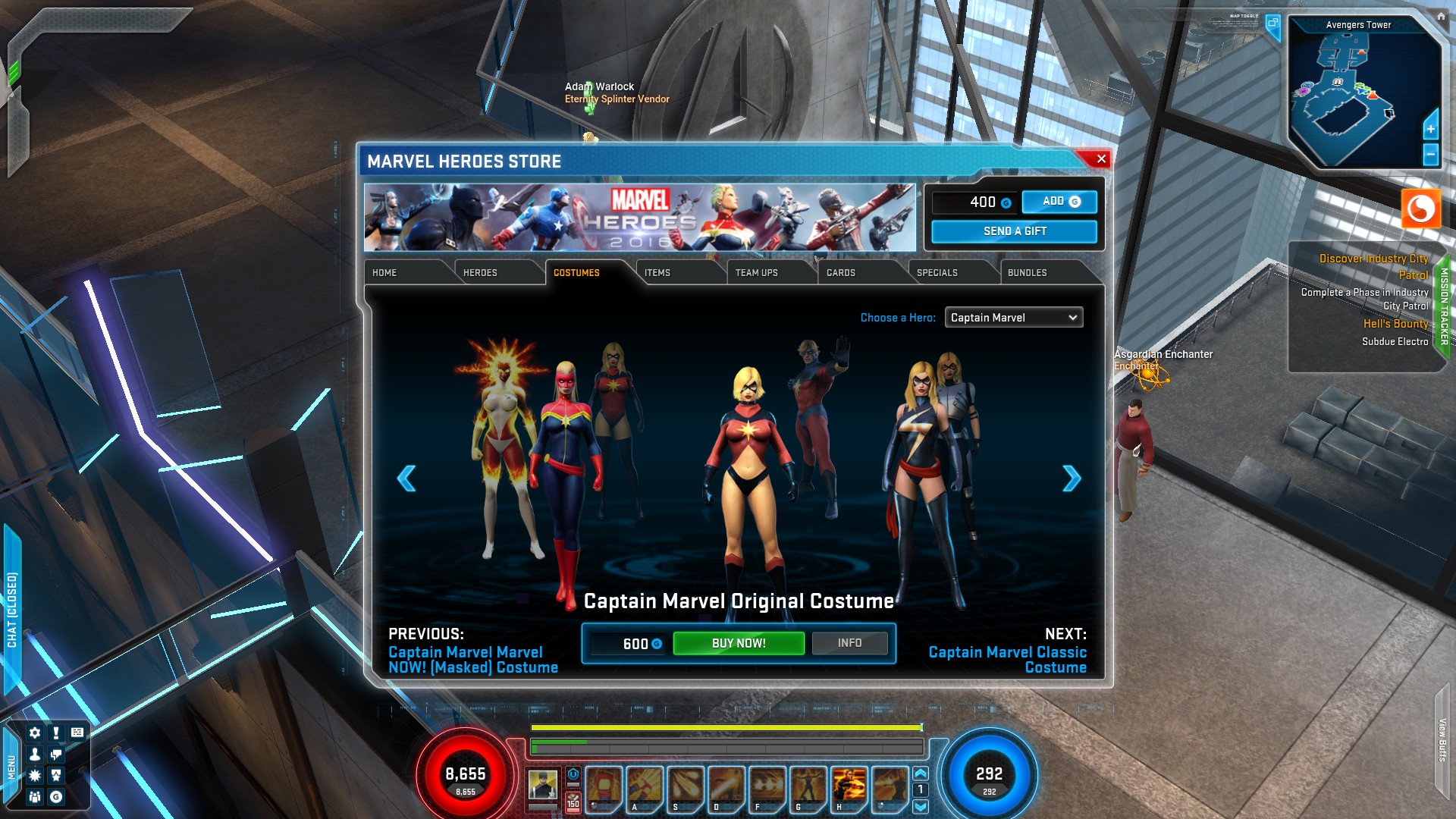 Need a sidekick? Get a team-up hero. The game will provide you with at least one, but all the playable heroes and some extras (like Carnage, Agent Venom and many more) can be purchased as a team-up. They have their own items and skills and gain levels just like you do. Plus if for some reason you need to go AFK for a bit they'll hang out and protect you.

My only real complaint is that I think this game needs a lot of balancing. Now don't get me wrong I know that it makes sense to be vastly powerful what with being a super being and all, but there's almost no challenge at all. It's possible to wipe a out a group of dozens of mobs with the use of one skill. In fact the only times I've been defeated since I started playing regularly are in the "Patrol maps" where everything is stronger and bosses come at you in multiples. To be fair though there is supposed to be end-game content for level 60 heroes that provide a much better challenge, but since I'm only level 41 at the time of this writing I can't speak to that myself. Also co-op play with friends will increase the difficulty of enemies on the map. 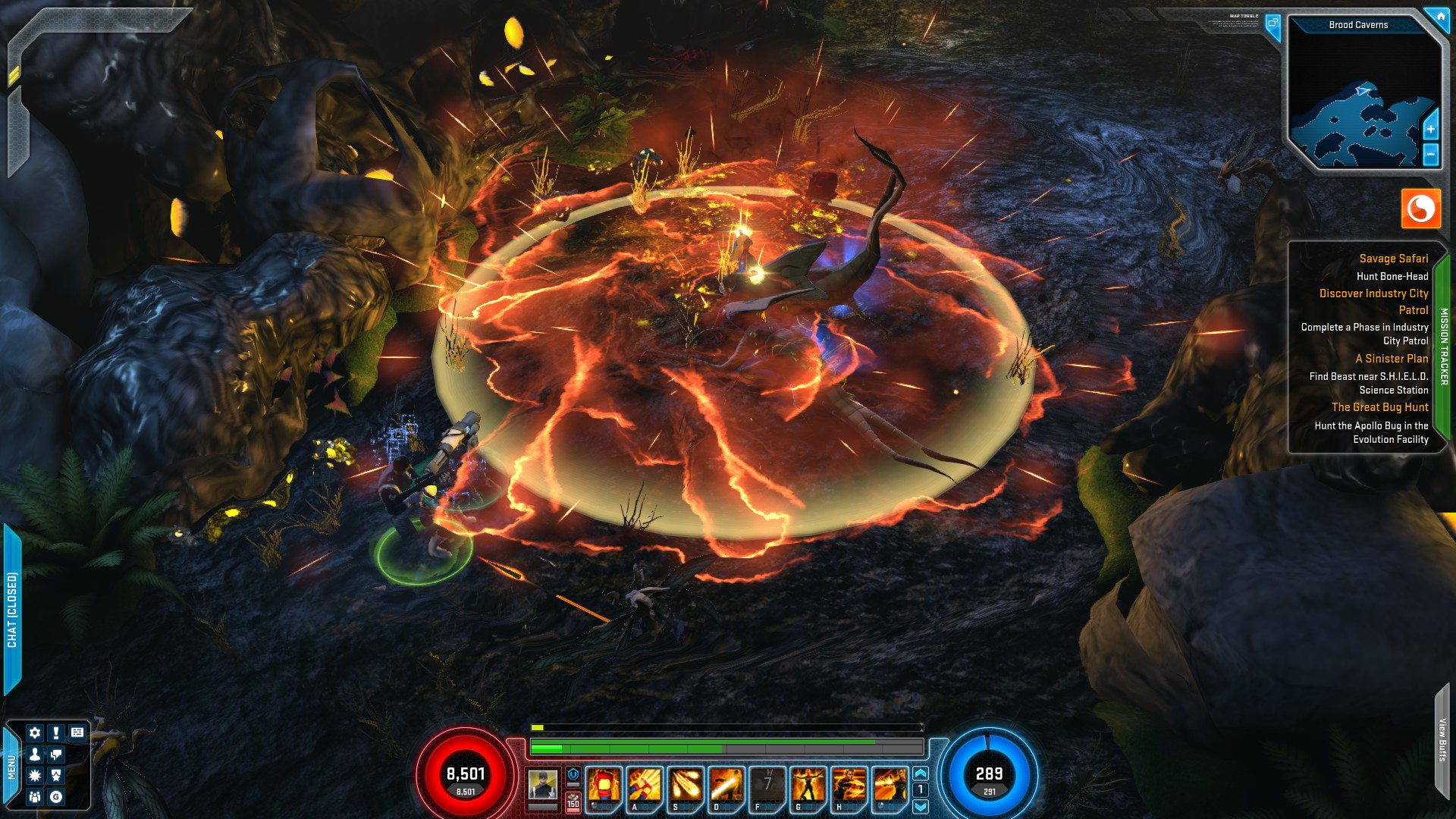 So there we have it, my recommendation to play a really good, friendly, free to play title with a great model. Marvel Heroes uses Unreal Engine 3 Engine so it runs great while looking great, and there's even a Mac port in case you use one of those things for games.

Our own Yoda0vgs introduced me to this in a sort of trial by fire live stream that we did a few days ago. You can see the video here on our Twinstiq LP channel, skip ahead to around the 11 minute mark to actually see us start playing.

System Requirements for Marvel Heroes are as follows