I have to start this by saying that this is a beta build and some things may change yadda yadda etc. whatever.

So last year some time when I started hearing of a third game game in the series I was pretty excited about it. The addition of a slew of new heroes to play each with their own styles and abilities and a leveling system and tons of new maps made me happy. So of course when Robot Entertainment opened up a beta for everyone to play I jumped on the boat, my thoughts follow.

Fans of the Orcs Must Die series like myself will find some similarities but only a few. First off it's all online play now and not just because of leader boards. Like OMD, players can bash orcs and ogres and kobolds to their hearts content in a survival mode facing waves of increasingly difficult enemies. And like OMD2, you'll also be able to team up with friends to do the same thing. That much is still fun and along with new hero types including the originals there's some variety in your game play. The problem is that OMD Unchained only looks like the first two titles that did everything right.

Now instead of a setup screen where you spend your hard earned skulls on traps and upgrades you'll instead have to build a deck of cards to go into battle with. The game gives you two decks, one for Survival Mode and one for Siege Mode which I'll talk about in a bit. Once you're in the game and playing you're stuck with what you've got in that deck, no more last minute changes before the round starts. And if you want to explore the map for optimal trap placement, you'd better do it quick because the round will start soon whether you're ready or not. You'll also have a limit on how many traps can be placed despite the amount of coin you've earned. Have enough money to fill the whole hallway with spikes and napalm and arrow traps all the way to the rift? Well as long as that's not more than 50 traps then that's great. Think 50 traps sounds like a lot? It's not. It should be noted that it's entirely possible that this number could increase at higher levels.

Remember that some of the traps you had in OMD 1 and 2 included Archers and Paladins? Well in Unchained they've been replaced by the Guardian card. You'll only be able to place them where the map allows you to, on a predefined guardian platform, and they are pretty strong and help a ton but what happened to being able to put them where you felt like they were going to be the most effective? 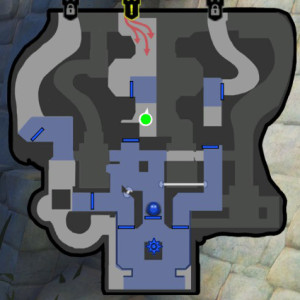 Not mention, you only get one to use on your map. You'll have to earn more cards through matches and crafting, or buy a chest from the store and maybe get one, to be able to place more guardians. This rule is the same for all of your traps by the way, you can no longer place traps on any and all surfaces. Instead you'll need to put them in specific areas that are marked on the mini-map in blue. The game calls them "Killboxes" I call them "unnecessary limitations".

Robot just seems to have strayed too far from a great formula for this mode of game play to be enjoyable as a whole any more. I would probably really enjoy it if the Survival mode and Siege mode just had different systems. It makes sense in Siege for the placements and limitations to be the way they are, but not in Survival.

Is not as great as it seems like it would be. You'll be juggling your battlefield level, your hero level and account level. Battlefield levels are gained while playing a round and each will unlock a tier of boosts to help your character survive the oncoming hordes. They are temporary levels and will reset after each match. Hero levels are just what they state, a level rank given to whichever hero you're currently playing and seem to have little to no effect on play as of now, at least none that I could really notice. Your account level grants you access to new and more difficult maps to play.

Themselves are pretty cool, with nice looking models and at least decent animations. There will be at least 15 heroes to choose from at release and those that are available to play now are fun. Everyone is different enough to be a separate entity, has their own strengths and weaknesses and feels very balanced in multiplayer. As it is now though, make sure you choose wisely because once you click a hero to play you can't change your mind until the match has ended. Meaning that even before the match starts an accidental click will mean that's the character you're playing as during this round. 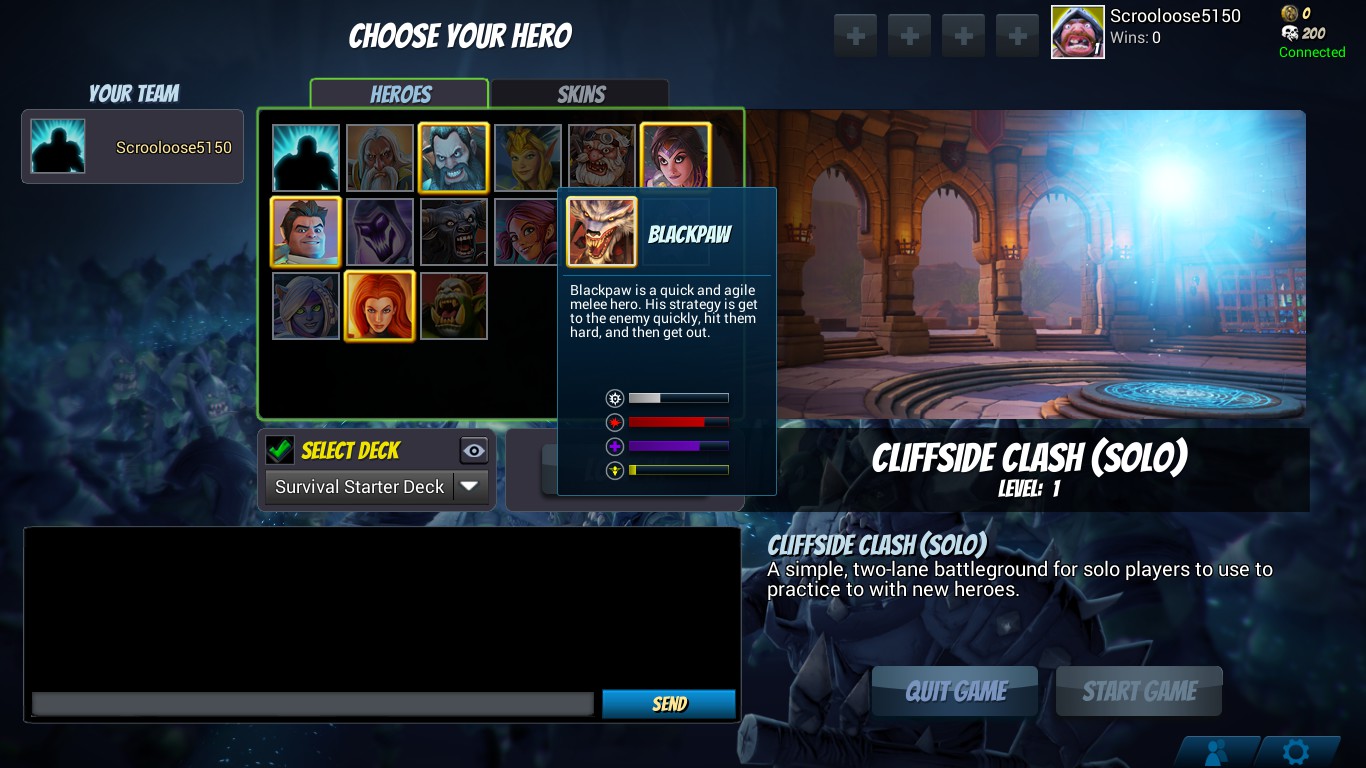 Is pretty quick and straightforward, but it also has its limits. For instance, finding a multiplayer game is easy, just click on the matchmaker and you'll be in game soon enough. Want to make one yourself? That's easy too, add your friends via a very convenient invitation system, select a mode and you're off and running. But if you want to make a custom game things feel a little beta still. Only Siege games can be created in the custom tab, no Survival mode here. You'll get your friends together in a 5v5 match (no more, no less) choose teams and go. If you need bots then you'll have to set them up individually before you can begin. Admittedly though, the bots seem to be pretty decent at their jobs. 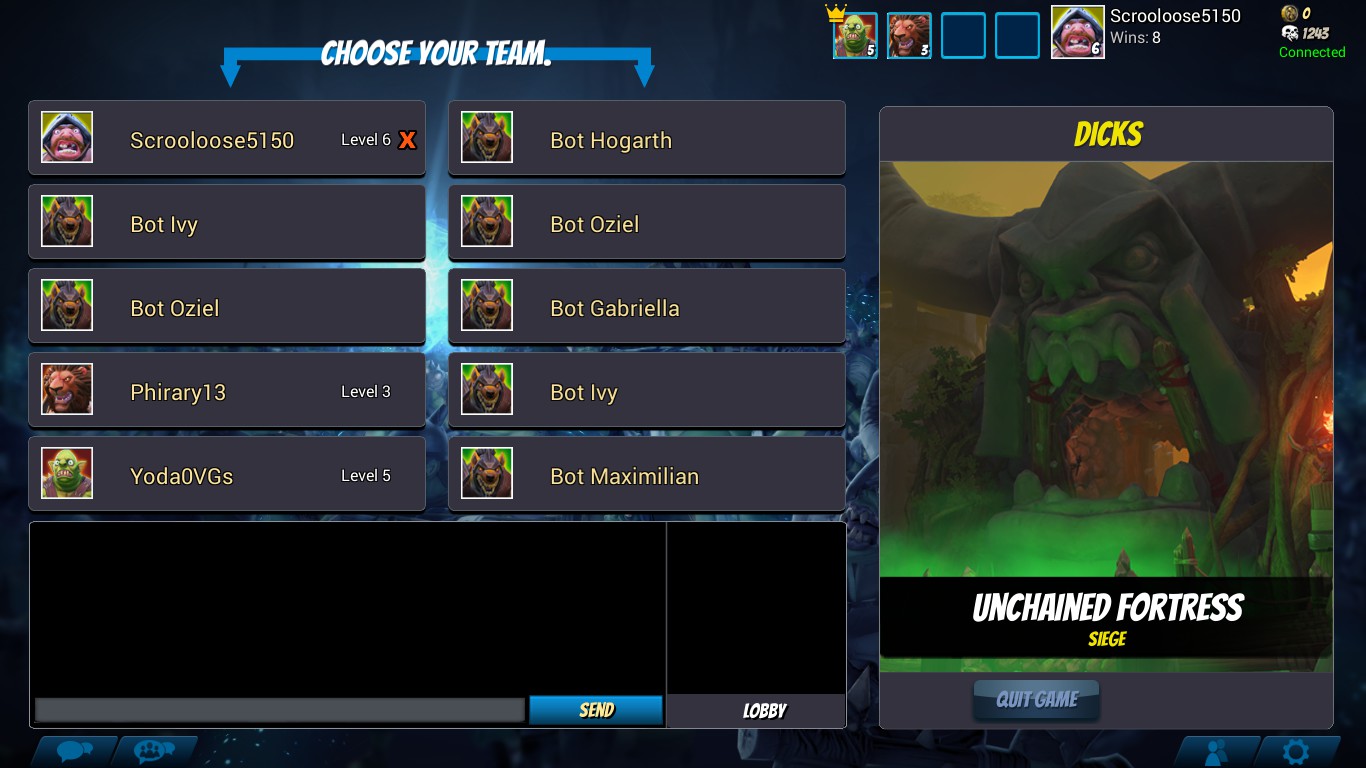 Ahh yes, the inevitable in-game store. I mentioned back in my recommendation for Marvel Heroes, that some titles pull off the free to play model pretty well. Orcs Must Die Unchained is NOT one of those games. Now the heroes and skins themselves are within reasonable limits even for this title, sitting around $5 to $10 each. What I have a problem with is the ability to purchase chests of random items that are guaranteed to contain things that will make a character stronger than others owned by people who don't want to spend money on this game. Pay to win isn't cool people, don't support it.

The good side to this...

Is that heroes are free to play albeit slightly gimped because experience gains won't be 100% until you purchase that character. Still, you'll be able to try everyone out once they're all available and get an idea of what you're in for before making a decision.

Maps are many and well designed. Despite the limits OMDU places on you, at least the usable areas are well made.

Is pretty fun actually. This is clearly where Robot was heading with the core development of the game. Where the classic survival mode feels very different and overall bad, Siege mode feels solid and pretty refined. This is essentially a MOBA with the elements of traps from Orcs Must Die. Ten players, five on each side of a symmetrical map, fight to get their minions through the enemy rift. However lanes don't conflict with each other so your minions wont ever fight other minions. Instead your players will choose roles and become Attackers, Defenders or Pillagers and benefit the team in their own way all in the name of getting those friendly minions through enemy traps with the goal of getting them to the enemy's rift and wearing down their points. When a rift reaches zero points, the opposite team has won. 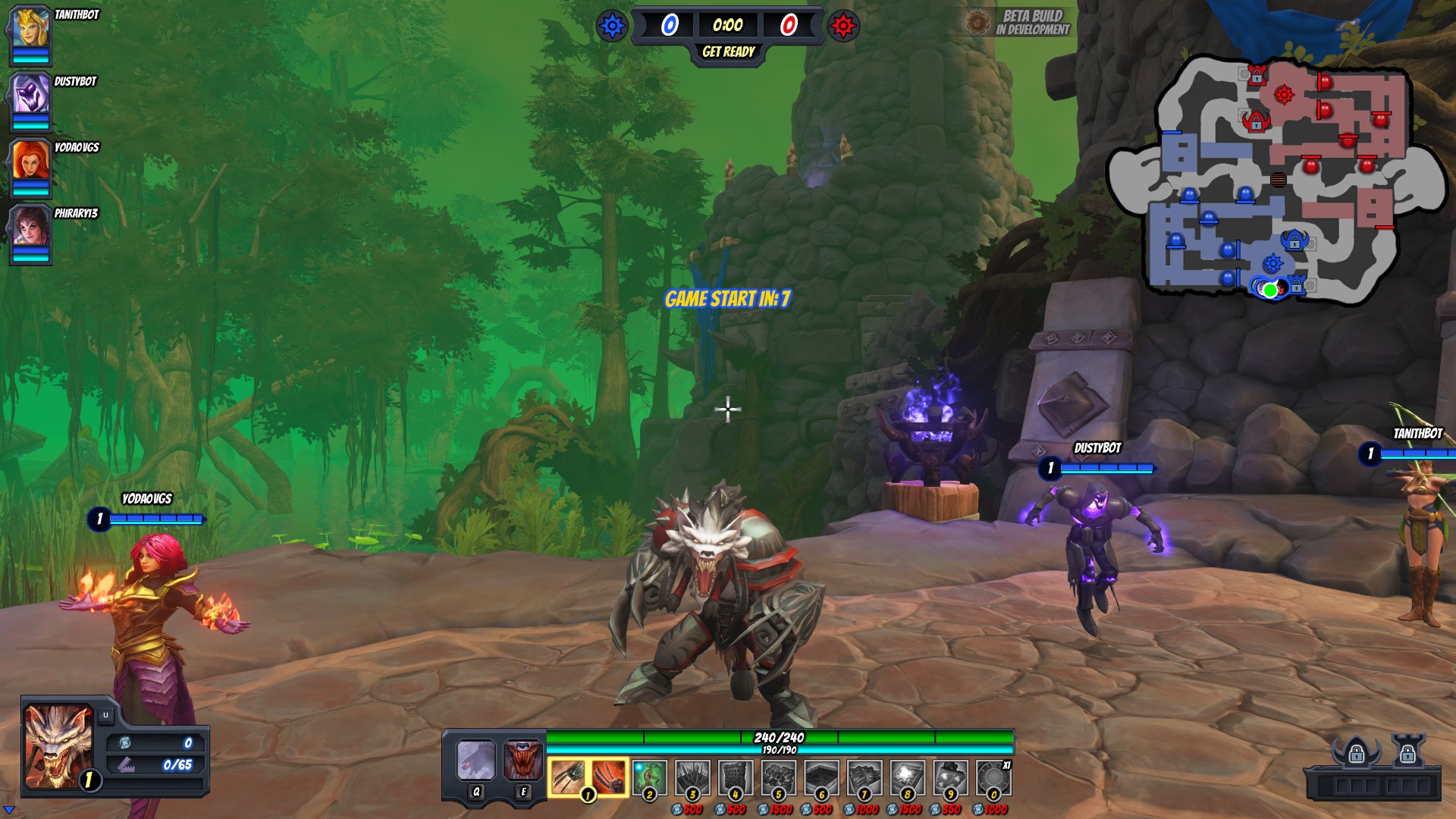 Defenders will start with money to place traps and barricades in enemy attack lanes to help stop minions from reaching your team's rift. Attackers will start with a bonus to attacking and friendly minion defense, and the Pillagers will be more effective in collecting items from crates found around the map to upgrade minions.

When it all boils down, it's just a MOBA, but it's just different enough to feel like something new. And even for someone like myself who doesn't particularly like MOBAs, it's actually pretty fun. Yoda, myself and Twinstiq friend and my little sister, Phirary13 played a couple of matches that I'll link here in a kind of NSFW video due to our language. This recording includes some of the Survival mode as well, and any OMD fans will see the issues there. Though I will say that even the Survival mode is much more fun with friends.

Has a lot of slots for decks, thank goodness. But why does this even need to be there? Why can't it just be earning traps by playing the game? Why does it need to be a CCG inside a Tower Defense game being overshadowed by a MOBA? The answer is because then players wouldn't have anything to grind out. Did I mention that you can craft cards? Well you can, and it takes a lot of materials that are gained by completing matches. What this does is drag out your play time because in order to get that next trap or guardian you'll need hundreds, if not thousands of skulls and dozens and dozens of materials that drop on certain maps. And it's not just materials, there's also a whole separate category of "parts"...Uuuurrrgghh why can't we just have a screen to purchase and upgrade gear and traps like there used to be? Why must it be so convoluted? It's just too much book keeping for such a simple game. 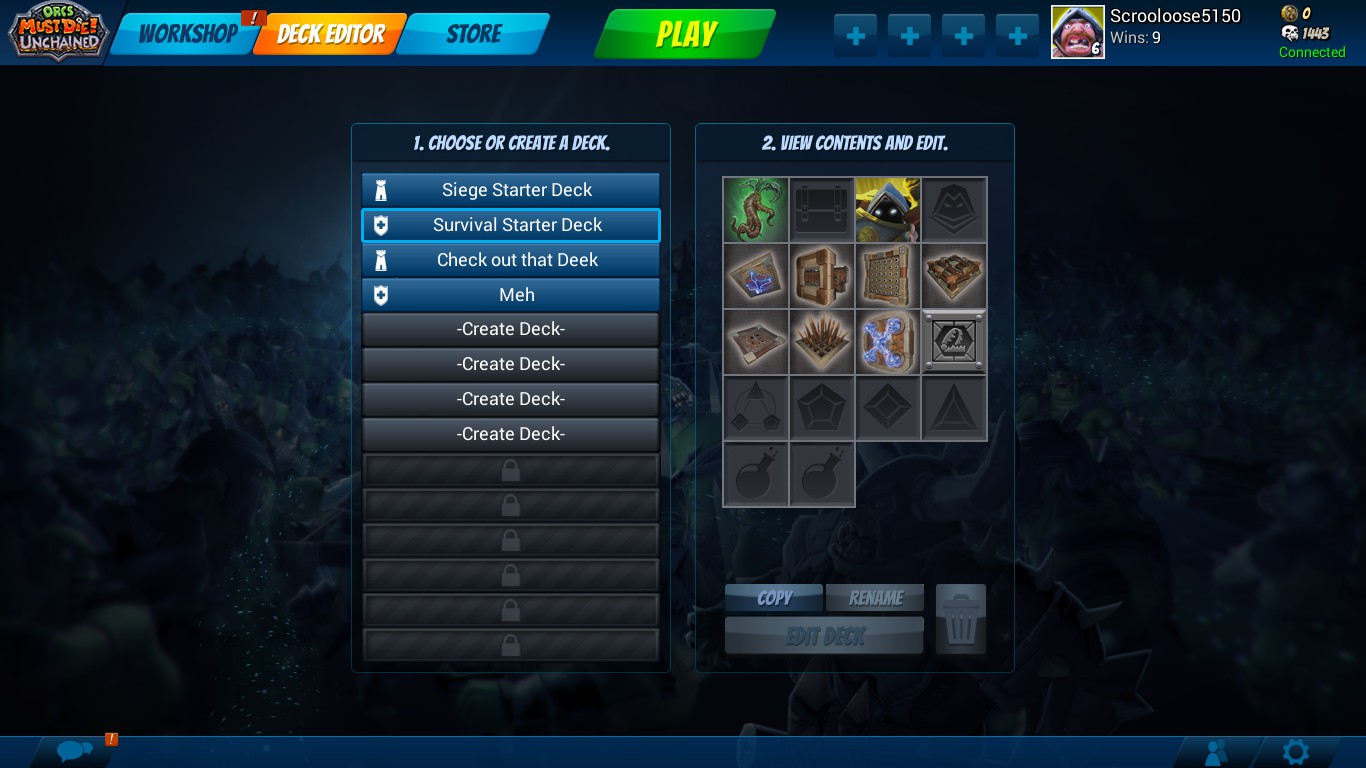 As I mentioned above you can purchase a chest from the store with real currency to possibly bypass the tedium of material farming but that's exactly what this system was designed for.

What really sucks about this direction is that those of us who are fans of the OMD series and expect to have that great, wave on wave, tower defense game play will be severely disappointed. As of now there is no unlimited wave mode, only what the map calls for. Maybe this will change before release, maybe a lot of things will, but I'm certainly not holding my breath. This is an open beta and that usually means a release date is just around the corner.

It just feels like Robot was going for a Deathmatch / MOBA feel, and since it was called Orcs Must Die, they had to put some semblance of the original games in as an afterthought. And frankly that blows because no matter how much fun Siege Mode is, I can't recommend this game to anyone expecting Orcs Must Die Unchained to be anything like the great titles that came before it. Robot should have just called it what it is, Orcs Must Die: PVP Siege Arena.

System Requirements for Orcs Must Die Unchained are as follows